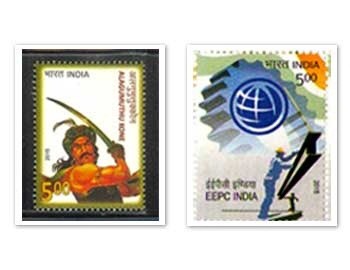 1. Veeran Azhagu Mutthu Kone 1728 – 1757, the King of Yadava community in erstwhile Tiruneveli, was known for leading the first revolt against the British East India Company during the 1750s. A stamp was issued on 26th December 2015 to commemorate his salient efforts and sacrifices for the nation.  With the kind of creative design, this one can definitely be counted as one of the most unique Indian stamps of 2015.

2. Established on 1st July 1916, The Zoological Survey of India (ZSI) have been involved in some laudable research activities for exploring, surveying, inventorying and monitoring faunal diversity in various states, selected ecosystems and protected areas of India. An official series of stamps were issued on 3rd December to honour their work. Among the other Indian Stamps of 2015, two variants were issued in this series; the 25 Rs Stamp had a beautiful depiction of the diverse nature of wildlife in India.

3. A year which saw a lot of favourable changes in the Engineering sector, EEPC or the Engineering Exports Promotion Council played a vital role in bringing in reforms and acting as a mediator between the engineering industry and the government. On 24th November 2015, a special stamp was issued to celebrate its successful journey. Unlike the other Stamps of India issued in 2015, this one is special because of its symbolic design and well-thought colour combination.

4. Chacha Nehru always believed that the right kind of education for children along with their careful and loving nurturing is what will define a country’s bright future. To foster his ideology a commemorative stamp was released on his birthday – 14th Nov, last year. This stamp holds a special place in the list of Indian stamps introduced in 2015, as they look as if they were painted by children to go with the theme.

5. The First Gorkha Regiment has a long tradition of showcasing the highest level of bravery and its exemplary contribution for the Indian Army. Known for its tough fights in colonial conflicts prior to Independence, as well as the First and Second World Wars, since 1947 the regiment has been the highlight of wars against Pakistan in 1965 and 1971 too. On 2nd November, 2015, a commemorative postage stamp on FIRST GORKHA RIFLES was issued. This 5 Rs. Indian Stamp issued in 2015 will give you goosebumps and make you sense a patriotic vibe.

7. The Peti Charkha symbolizes the “swadeshi” Ideology that was practiced and propagated by Mahatma Gandhi. This beautiful stamp was released on 15th October 2015 as a mark of respect to this novel thought, by our father of the Nation. Quite different from the other Indian stamps that were issued in 2015, the design of this stamp has that historic touch to it with a texture of Khadi in its background.

8. Lovingly known as the Missile Man of India – Shri A.P.J. Abdul Kalam’s contribution in the field of education and science in India was a remarkable indeed. Apart from that he inspired the young generation to pursue their dreams and make the nation proud. 2015 saw the sad demise of this respected personality and hence a stamp was issued on 15th October 2015 to honour his work. His charming smile and the picture of a missile in the background, this stamp of India will be a priced possession for every Indian.

9. The 1965 war against Pakistan goes down as one of the bravest missions undertaken in the history of Indian Army. Thousands of Indian Soldiers laid down their lives to safeguard the security of our nation. On 15th September, 2015, a special stamp was issued to commemorate the valour and sacrifice of our jawans. What makes this stamp of India so special is that it has a real photograph of the soldiers who fought this war.

10. Hindi literature has seen a lot of highly acclaimed and talented writers and poets over several decades. As an initiative for the universalisation of this beautiful language, The 10th World Hindi Conference was held in Bhopal in September last year, where noted scholars were present. A commemorative stamp was issued to mark this event. The symbol on this Indian stamp comprises of the number “10” in hindi over the picture of a peacock which is the national bird of India.

11. Women in India has been playing different roles and handling very important responsibilities, over the decades. Empowering women to make them independent has been a profound government initiative. This artistic stamp which was issued on 2nd September 2015, is a visual treat indeed and clearly signifies the strength of an Indian woman.  The stamp has a lovely painting of Indian women different avatars of a mother, doctor, teacher and a soldier.

12. Ashoka was undoubtedly one of the greatest emperors of India, His empire stretched from the Hindu Kush mountains in Afghanistan to the modern state of Bangladesh in the east from 268 to 232 BC. To honour this mighty King of India a beautifully painted stamp was issued on 24th August 2015. The use of colours on this stamp gives it that royal appeal and rightly depicts the stature of Ashoka the Great.

13. Yoga is considered to be a precious gift from India to the world. Originated in India, centuries ago, the healing power of Yoga is effective even in this modern day and age. A symbolic stamp was issued on 21st June 2015 which is popularly celebrated as Yoga Day. The symbol on this 2015 Indian stamp features a human figure practicing yoga, with the world behind his head and the rays of light emerging out signifies that Yoga helps improving not just physical but spiritual wellbeing as well.

14. Project Rukmini made all of us proud when it earned its name as the first indigenous Naval communication satellite of India. Also known as GSAT-7, this multi-band fourth-generation communication satellite will be used exclusively by the Navy for secure, real-time communications among its warships, submarines, aircrafts and land systems. A special stamp was issued on 14th February 2015 to celebrate the launch of this beauty. The stamp design exactly shows you how GSAT-7 enables communication between Navy Ships, aircrafts etc.

15. Swachh Bharat was another innovative initiative by the government of India to promote the idea of making India clean. This campaign definitely inspired everyone to work together towards building a cleaner India. A special commemorative postage stamp was issued on 30th January to celebrate this unique national spirit. The imagery on this Indian stamp wonderfully shows citizens of India collectively working to achieve a common objective.

16. With an intention to raise your voice and create awareness about female foeticide and women’s education in India, a noble campaign was run by the Government called “Beti bachao, beti padhao”. Some really creative stamps were released on 22nd Jan 2015 to mark the success of this campaign. Some would debate if this is too gaudy for a stamp design, nevertheless the picture shows a girl chi

ld learning and a lady doctor.

So which one’s your favourite? Let the voting begin! Also, here is your chance to build your stamp collection with some fresh additions.