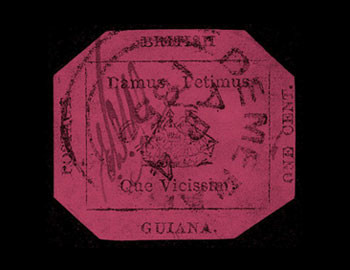 Look at me. I never thought I would see this day. I breathe easy, as I hold my throne at the National Postal Museum of the Smithsonian, Washington DC. They call me “British Guiana 1 cent Magenta”, the rarest stamp of the world, one of my kind and they rightly have a profound reason to set their eyes on me. With a striking black ink printed on a majestic magenta paper and my corners clipped off to form a unique octagonal shape, they adore me even more.

My life – a mischance

My story truly reflects the unpredictable nature of our lives as my existence itself was a mischance. Let’s go back to the 19th century;, a British printer, Waterlow & Sons printed my fellow British Guiana stamps. In early 1856, unfortunately, or should I say fortunately, the stock of stamps was sold out before time. Thanks to the postmaster of British Guiana E.T.E. Dalton, who needed stamps in a jiffy, I am here today, narrating my adventurous tale. Dalton quickly ordered Joseph Baum and William Dallas, the publishers of the Official Gazette in Georgetown, to print a special emergency issue.

Dalton printed two sets of stamps. The one-cent stamps were to be used for newspapers and the four-cent stamps, for letters. On that lucky day, I was born with the name British Guiana, a beautiful seal of the ‘Colon’ a ship, and the Latin motto of the colony, “Damus Petimus que Vicissim”, which means “We give and we seek in return”.

Generally, for ease of use and convenience, stamps of different values of the same design were printed in varying colours, but due to paucity of time, the printing firm did both values in black ink on magenta coloured paper. Dalton hated the design because he had some specifications that were communicated to authorised printers. Much to his dismay, the printer chose to add a ship image of their own design to stamps.  Also, its quality was poor; but it was the least he could expect in such a short time period.

Nevertheless, he had an ingenious idea to prevent forgery. He asked the post office workers to have their handwritten initials on each stamp before selling it. I wished I had initials of Dalton himself – “E.T.E.D” on me. Even then, it’s an honour to have Mr. ED Wright’s initials on me – “E.D.W”

From a Scottish schoolboy collector to a murderer to Washington DC, phew!

One fine day in 1873, a rather enthusiastic little 12 year old schoolboy Vernon Vaughan from Georgetown, Scotland got his hands on me. He found me on one of his family papers. By then I looked real ugly, with smudged ink all over me. Even then, Vernon thought I was special and drowned in a bowl of water, purged me out of the paper and placed me in his lovely collection.

He then thought of selling me off to fill his piggy bank and buy some foreign stamps. He sold me to N. R. McKinnon, a local collector, for just six shillings, which amounts to less than one US dollar. I stayed with McKinnon for almost 5 years, after which he sold his entire collection, including me to his friend Wylie Hill who lived in Glasgow, Scotland.

Life suddenly started looking rosy, when people started understanding my real worth. Soon after that, a London stamp dealer, Edward Pemberton, studied the collection and identified me as one of the rarest stamp of the world. Hill later sold me to Thomas Ridpath, a dealer in Liverpool, England, for an impressive 120 British pounds.

After that the dealer sold me to one of the most famous collectors in those days, a Frenchman named Count Philip La Renotiere Von Ferrari. Sadly after the gentleman’s demise his entire collection was auctioned in Paris between 1921 and 1925. I was bought in 1922 by millionaire Arthur Hind of Utica, New York, for 7,343 GBP.

It was Hind who was the reason behind making me the most unique stamp of the world. Some say that he purchased another issue of the 1-cent stamp and destroyed it to make his collection even more exquisite. After Hind died, his wife claimed that I belonged to her, which the court dismissed completely. Post that, I was sold to Frederick Small, an Australian living in Ft. Lauderdale, Florida, for a price ranging between US$40,000 to US$75,000.

In 1970, Robert Siegel Galleries conducted an auction where Irwin Weinberg and a group of investors from Wilkes Barre, Pennsylvania bought me for a whopping $240,000. I started realizing my own worth when John E. du Pont of Philadelphia, Pennsylvania, bought me at an auction for $935,000, 10 years later. To be a muse of a murderer was quite an experience, I must say!

Today, the answer to “who owns me?” is still a mystery and I can’t really betray my owner as he/she likes to remain anonymous. It is he/she, who shelled out 9,480,000 USDs and thought that I deserve a home at the National Postal Museum of the Smithsonian in November, 2014. Since April 2015, I lay here, staring at amused faces of Philatelists and History lovers.

Well, it has been a long story indeed and a very eventful one too.

Read more about rare stamps of the world at Mintage World!