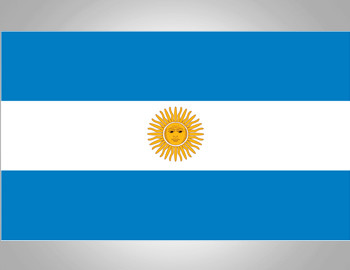 Known for its strength in football throughout the world, the currency of Argentina has been fascinating since its discovery. Let’s find out how and why in this part of our blog series. 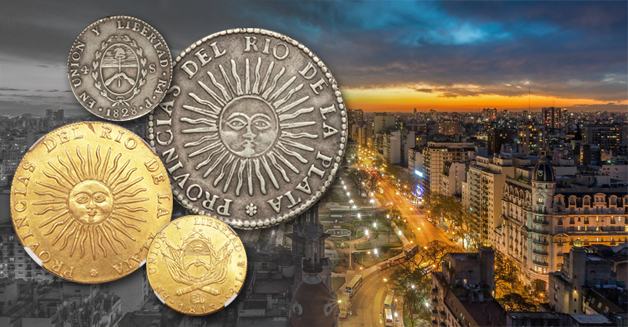 The vast country of Argentina was discovered in 1516 and was a permanent Spanish colony set-up in 1580 in Buenos Aires. Argentineans established their own government in 1810 when Napoleon the Great conquered Spain. Six years later in 1816, independence was formally obtained. However, internal conflicts through the first half of the century resulted in a provisional national coinage, mainly of crown-sized silver. The currency of Argentina like Reales, escudos, and pesos along with coins of its own called – sol (named in the honor of the country’s Spanish discoverer Juan Diaz de Solis), were now in use.

In 1826, two versions of Argentine peso called ‘Peso Fuerte’ (which was convertible at a rate of 17 to one Spanish ounce of fine gold) and the non-convertible ‘Peso Moneda Corriente’ (everyday currency) were induced. Both of these currencies were converted into one by 1881. They were now called the ‘Peso Moneda Nacional’. Exchange rate was fixed at 1 peso moneda nacional = 1 peso fuerte = 25 peso moneda corriente = 8 reales.

In 1970, the currency of Argentina was revalued at the rate of 100 to 1 which formed the ‘Peso ley’. This lasted till 1983 when ‘Peso argentino’ – not to be confused with argentino, the name for an older 10-peso gold coin, was born just before the return of democracy. 10,000 pesos were equal to one peso argentino.

The year of 1985 saw the introduction of ‘austral’ whose name was derived from a Spanish adjective meaning ‘southern’. The austral was exchanged for 1000 pesos; in 1992, the peso was reintroduced as the new peso, in exchange for 10,000 australs. It was also referred as ‘peso convertible’ since the international exchange rate fixed by the Central Bank was 1 peso to 1 US Dollar. This was later abandoned after the financial crisis of 2001.

Following the crisis, the currency of Argentina fluctuated in the market to varying fortunes. The government’s attempt to keep the value at 3 Argentine peso (ARS) to 1 US Dollar failed miserably. Currently, the ARS has reached an all-time low of 17.50 against the US Dollar.

Issues of 1881-1896: On November 3, 1881, the National Currencies Law No. 1130 was approved when gold and silver pesos were established as monetary units, with their referents: Argentine gold, value 5 pesos, Argentine average, 2, 50 pesos, the weight silver or patacon, pieces smaller than 50, 20, 10 and 5 cents and copper coins of 1 and 2 cents. This series was designed by the famous French engraver Eugene Oudine.

Argentino de Oro (1881-1896): In 1881, Law No. 1130 was approved. Unification of the national moneda determined the convertibility of the currency of Argentina to gold, and the issuance of a currency that was called “Argentino” gold.

Issues of 1896-1942: In 1896, the covenants of Law 1130 were definitively discontinued. The silver value had already been suppressed in 1884.  Law 3321 on December 14, 1895 was established with the copper-nickel coinage having an alloy of 75 percent copper and 25 nickel, in the values of 5, 10 and 20 cents. The “nickels”, as they have been called, have had an estimated duration of forty years along with some lapses interrupted from 1896 to 1942. The cospeles came from Germany and the United States which created problems during the respective World Wars. The series was completed in 1941, with the value of 50 cents in pure nickel lasting briefly.

Issues of 1950-1956: A new coinage, initially of copper-nickel and later of plated-steel was minted, commemorating the death of Jose de San Martin. This series of coins, with values of 50, 20, 10 and 5 cents continued until 1956. 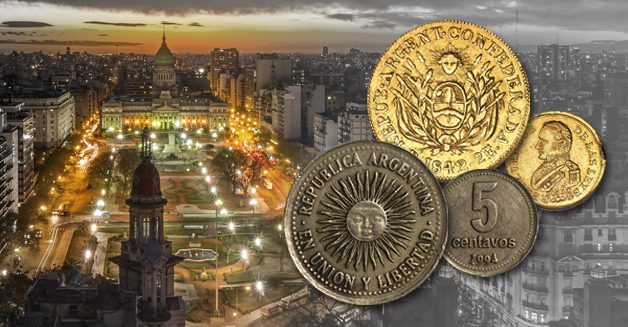 Argentine monetary stabilization program was implemented during the administration of Raul Alfonsin by his second economy minister, Juan Vital Sourrouille. The program, initiated in June 1985, was a “shock policy” and managed to contain inflation quickly without slowing down economic growth. The program ended in1988 when an inflationary upsurge forced the creation of a new program, known as the “Primavera Plan”. This did not succeed. In 1985, coins were issued for ½, 1, 5, 10, and 50 cents. In 1989, coins of 1, 5 and 10 australes were issued, followed in 1990 and 1991 by 100, 500 and 1000 australes.

The Law of Convertibility was sanctioned on March 27, 1991. A fixed exchange rate was established between the currency of Argentina and the United States currency, at the rate of one United States dollar per 10,000 Australes, which would later be replaced by a new currency, the Convertible Peso.  Its main objective was to control the hyperinflation affecting the economy at that time. The period in which the law of convertibility lasted was popularly called ‘the one to one’, in clear reference to the word peso.

Our journey of understanding Argentina Currency ends here. There’s a lot more on world currency coming soon. Stay with us.