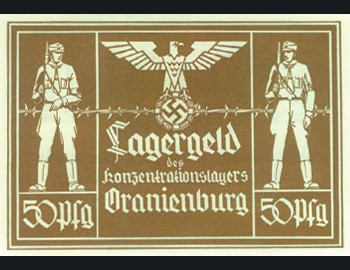 General Aung San was one of the most prominent leaders who fought bravely for Myanmar’s independence. As a mark of respect, his portrait was featured on official banknotes. What makes this note strange is that along with his portrait, the designers also introduced a watermark featuring his daughter Aung San Suu Kyi. She was the strongest contender who opposed Myanmar’s military Junta. This will definitely go down as one of the strange banknotes of the world.

Another banknote which has a strange story to it is a 50-Pfennig Note from the early Oranienburg Concentration Camp. A graphic artist named Horst-Willi Lippert was assigned to create the design for the note. He was actually imprisoned at the Oranienburg Concentration Camp when he was given the task. Although the design looks very normal with two soldiers patrolling a barbed wire fence, he went a step further! He replaced the “g” in the word Konzentrationslager (“concentration camp”) with “y” and made it Konzentrationslayer which translates to “concentration killer”. Even the powerful and tactful Nazis never found out about this minor yet meaningful change.

A banknote which goes to show that sense of humour prevailed even in times of war. After World War 1, when the situation was tense this emergency German money would have probably brought a smile on people’s faces. It features a donkey doing ahem ahem.. should we spell that out to you? It is quite beautiful and graphic to be explained without the need of any words! If you like collecting strange banknotes of the world, then this should be your dream note!

They say that in times of adversity, you might have to take the strangest of steps sometimes. But taking that step while issuing an official banknote? Well, you got to be really brave to do something like this while issuing national banknotes. Joseph Mobutu’s tyrannical regime was overthrown by the Democratic Republic of Congo (Zaire). But the state was not financially sound to issue notes. They used the same old notes that were in circulation and simply punched out Mobutu’s face from the currency.

There are so many island nations around the world that we have never really though how their currencies might look. Easter Island Rongo issued a note which features all the important facets of the country like the giant moai statue carved some 600-800 years ago and the tribal population. You might not want to include this one among the strange banknotes of the world, but it definitely is a unique one!

This was a rather embarrassing moment for Canada when they released a new series of $1,000 notes in the 1950’s featuring a tiara on the queen’s head. After the notes were released officially, people started noticing a strange demon shaped imagery behind the queen’s ear. Artists were asked to alter the designs and the series with modified notes were reissued in 1957.

If you have come across any more strange banknotes like these, feel free to share information or images, we would be glad to have them featured in this article. Cheers and happy collecting!

Mintage World is where you can find detailed information about currency notes of India. Start exploring right away!