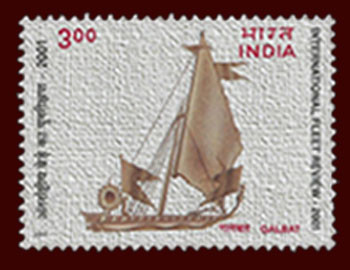 India has always stood tall with its head high when it comes to protecting the civilians from all kinds of external or internal breaches of security. The attitude of our Armed forces has always been “DON’T MESS WITH US!” Considering a sub-continent that is surrounded by water bodies on three sides, with a coastline of 7,517 kilometres, the Indian Navy doesn’t really need a special mention. 4th December is celebrated as Navy Day in India and today we take a look at some of the stamps of India that feature Indian Navy Ships!

The ancient history of India has accounted of many Chola expeditions which were undertaken to fight and occupy south-east-Asian territories.  In 1503, Manavikraman, Samoothiri Raja of Kozhikode, used his strong Navy to fight against the Portuguese attempts at extracting trading privileges.  The Maratha Navy under Kanhogi Angre, attacked several colonial ships and captured many vessels of the British East India Company asking ransom.

After independence, the Indian Navy has undertaken several successful operations like the Annexation of Goa, 1961, Indo-Pakistani war of 1965, Indo-Pakistan war of 1971, Operation Cactus, Operation Sukoon etc. The Indian Navy has throughout been a well-equipped watchdog which has successfully intercepted several threats to the country. One of the reasons why you are reading this article safely is because of the brave and extremely tactical operations of Indian Navy! 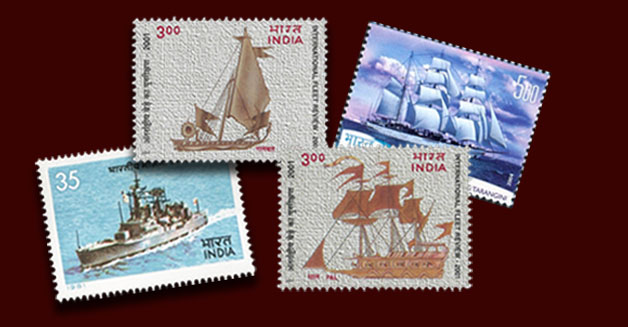 The president of India reviews the Indian Navy, once during his/ her tenure. The 8th review was conducted in 2011 and special commemorative stamps were issued in February 2011.  Many warships participated in the review on an invitation. Four stamps of India were issued, one of which was of the denomination 15 rupees and featured a stamp from the ancient Mohenjadaro period. An 18th century Maratha Navy’s three-masted fighter Pal with guns on the broadsides and the Galbat type ship were depicted on two other 3 rupee stamps of India. These ships participated in reviews of those days in Ratnagiri. Another 3 rupee stamp featured the Tarangini, the sail training ship which also participated in the 8th review.  A first-day cover was also issued featuring a representation of the ships participating in the review along with the slogan Shan-no-Varuna, which translates to “May the Ocean God Varuna be auspicious unto us.” 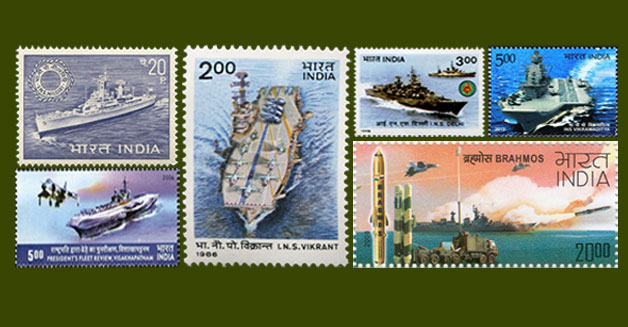 The Nilgiri-class frigates belong to the Leander class, designed and built at Mazagon Dock Limited in Mumbai. Out of the six ships built between 1972 and 81, the lead ship INS Nilgiri was the first major warship to be built in collaboration with Yarrow Shipbuilders of the United Kingdom. It is named after Nilgiri Hills and the other ships built in the class are also named after hill ranges of India. The Indian Navy and Signaal of Netherlands came together to build a radar search, tracking and fire control suite in India, which was adopted for the next five ships. Indian Navy ships are installed with improved versions of Signaal search radar. The last two ships, INS Vindhyagiri and INS Taragiri were modified significantly with the addition of a Sea King ASW helicopter, a collapsible Canadian hangar, ILAS 324 mm triple torpedo tubes and a Bofors ASW twin barrel mortar, ASW fire control action information system, led by the late Captain Prakash N Gour. The Nilgiri class has been decommissioned by the navy, with the entry into service of the Shivalik-class. One of the stamps of India is dedicated to INS Nilgiri.

The Delhi-class destroyers are guided-missile destroyers with three active ships in service. They are the third-largest warships of India to be built at Mazagon Dock Limited in Mumbai, after the Kolkata-class destroyers and the Shivalik-class frigates. They are inspired by the designs of Sovremenny, Rajput and Kashin-II-class destroyers, and the Godavari-class frigate. They are fit to operate in a NBC environment. 2 3S-90 launchers are installed ahead of the bridge and the other atop the dual helicopter hangar to tackle airborne attacks. The ship is also equipped with the Rafael Barak 1 point air defence missile system, a torpedo launcher, anti-submarine rocket launchers with 12 tubes, four chaff launch systems, the BEL Ajanta radar interceptor etc. Each ship can also support two helicopters, the Sea King or the HAL Dhruv for air surveillance and anti-submarine operations. Special commemorative stamps of India depicted this beautiful ship!

Vikramaditya means “Brave as the Sun” in Sanskrit. The ship is a modified Kiev-class aircraft carrier which was commissioned in 2013. It was earlier called Baku and commissioned in 1987 for Soviet and later with the Russian Navies. It was then decommissioned in 1996 as it was too expensive for the post-Cold War budget. India purchased the ship on 20th January 2004 for $2.35 billion. Prime Minister of India Narendra Modi inducted INS Vikramaditya into the Indian Navy On 14th  June 2014.  India had to pay US$800 million for the upgrade and US$1 billion for the aircraft and weapons systems. In 2009 advanced E-2D Hawkeye was inducted to the Indian Navy in 2009. Several other upgrades were made to the ship for a “short take-off but arrested recovery” (STOBAR) configuration and converting a hybrid carrier/cruiser to a pure carrier. INS Vikramaditya was featured on one of the commemorative stamps of India.

Vikrant translates to “courageous”, “stepping beyond” or “bold” in Sanskrit. This ship was Majestic-class aircraft carrier which was built as HMS Hercules for the British Royal Navy during World War II. Its construction was abruptly terminated and was never used by the British force. The incomplete carrier was purchased in 1957, and was built completely in 1961. INS Vikrant was the first carrier of the Indian Navy and was an effective naval blockade on East Pakistan during the Indo-Pakistan War of 1971. In January 1997 it was decommissioned and from 1997 to 2012 it became a museum ship in Cuffe Parade, Mumbai. In January 2014, it was sold via an online auction and scrapped in November 2014. It’s initial purpose was to counter the German and Japanese forces with a light aircraft carrier design that could be built quickly at a lesser cost.  A number of improvements to the original design were ordered by the Indian Navy, including an angled deck, steam catapults and a modified island. Click here to take a look at one of the stamps of India featuring INS Vikrant.

Viraat means Giant in Sanskrit. The ship is a Centaur-class aircraft carrier which was commissioned before INS Vikramaditya in 2013.  It was the last British ship built for the Indian Navy and was the oldest aircraft carrier in service as well. It was commissioned in 1959 as the Royal Navy’s HMS Hermes, and decommissioned in 1984, after which it was sold to India in 1987. INS Viraat served for 27 years after it was commissioned into the Indian Navy on 12th May 1987. On 23 July 2016, Viraat sailed for the last time from Mumbai to Kochi. It is uncertain as to what would be the final fate of the ship now. It had a magazine capacity of 80 lightweight torpedoes. The vessel can carry 750 troops and 4 LCVP landing craft in the aft section. Up to 26 combat aircraft can be carried by the ship during a war and is apt for amphibious and ASW operations. Click here to take a look at one of the stamps of India depicting INS Viraat.

The BrahMos is a short-range ramjet supersonic cruise missile that can be launched from submarines, ships, aircraft or land. It is the world’s fastest anti-ship cruise missile in operation. The Russian Federation’s NPO Mashinostroeyenia and India’s Defence Research and Development Organisation (DRDO) came together and formed BrahMos Aerospace. The name BrahMos comes from the two rivers, the Brahmaputra of India and the Moskva of Russia. A hypersonic version of the missile, BrahMos-II, is under development with speed of Mach 7-8. A land based test was conducted from the Pokhran desert, in which the ‘S’ maneuver at Mach 2.8 was demonstrated for the Indian Army and a launch in which the land attack capability from sea was demonstrated.  Click here to take a look at one of the stamps of India depicting Brahmos – Cruise Missile. 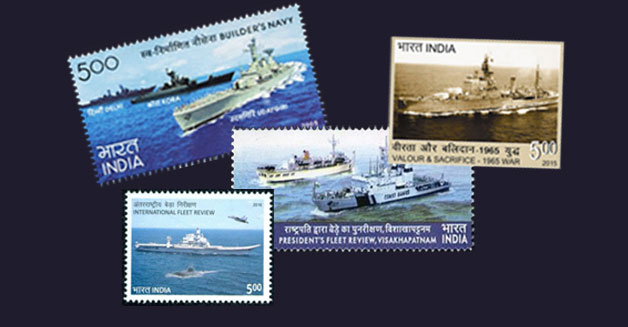 Several other stamps of India depict and celebrate Navy. One of it was a 5 rupees commemorative stamp issued for Builder’s Navy that was issued in the year 2005.

The Valour and Sacrifice of our Jawans during the 1965 war was honoured with lovely commemorative stamps of India that were released in 2015.

International Fleet Review and President’s Fleet Review, Visakhapatnam were both celebrated on two different stamps of India that were released in 2016 and 2006 respectively.