The Helgoland or Heligoland is an island in the North Sea with a population of around 1,700. This tiny island, though otherwise unknown, is a celebrated name in the world of philately. The handful of stamps issued with this name are quite precious. Before we get into the small world of the Stamps of Helgoland, let’s learn about the nation and its history.

The word Helgoland is an assimilation of two Anglo-Saxon words “Helig Land” and also from the Norwegian / Danish words “Hellige Land”, both meaning “Holy Land”.  In Old Norse mythology, the island was associated with Forseti, the god of justice. The island has been inhabited since ancient times, primarily by ethnic Frisians. Until the first decade of the 18th century, ownership of the island switched a number of times between the Kingdom of Denmark, the Duchy of Schleswig-Holstein, and the Hanseatic Free City of Hamburg.  In August of 1714, the island was seized by Denmark, and it remained in Danish hands until 1807. Following the Napoleonic Wars, Denmark formally ceded the island to Great Britain by the Treaty of Kiel on January 14, 1814.

However, Helgoland was a British Protectorate only for the namesake. Though The British maintained a naval presence there, otherwise the island was completely ignored. This lack of interest of the British did not go unnoticed; as soon enough the island became a popular vacation resort for well-to-do German visitors.  It also attracted artists and writers from the German kingdoms. Meantime, Wilhelm the King of Prussia became Emperor Wilhelm I of the newly proclaimed German Empire. Following the creation of the empire, the Germans began looking at the British Protectorate of Helgoland from a strategic point of view. The ending decade of the 19th century brought about a political shift on the lands of Helgoland. German Empire TRADED some of its colonial interests in Zanzibar and East Africa to Great Britain for the island.  On August 10, 1890, the new territory officially became part of the Imperial German State of Schleswig-Holstein. 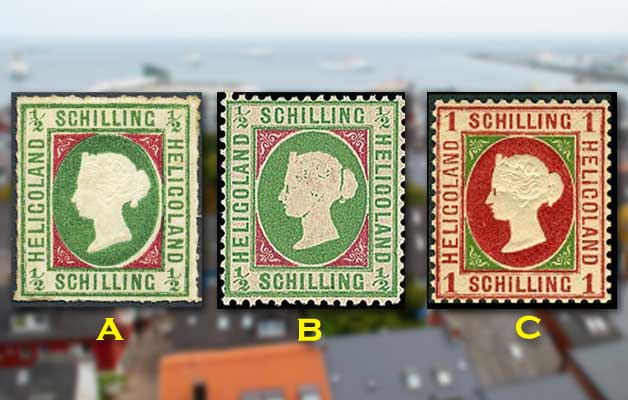 The first official postage stamps of Helgoland appeared in 1867 and were imperforate (see stamp “A”. The stamps feature the left facing portrait of Queen Victoria. These postage stamps were bi-colored and they were all printed in Berlin by the Prussian State Printing Office. The first stamps of Helgoland that appeared in April 1867 were comprised of four stamps with following denominations:

Next stamp issue came in the year 1869 which existed till 1874. The design remained the same however these stamps were, now, issued with perforation. This lot comprised of five denominations which are given below: 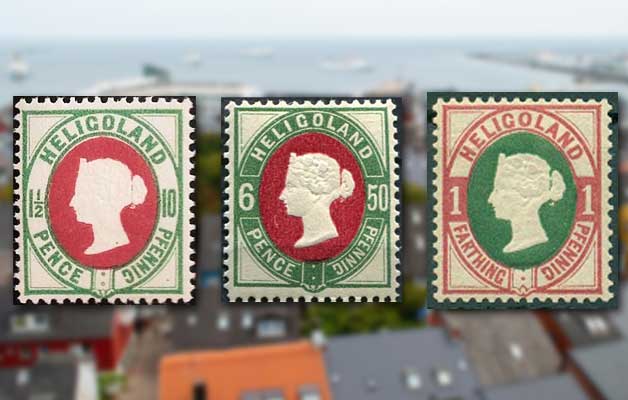 Helgoland issued a re-designed series of definitive postage stamps beginning in February 1875.  This was necessitated by the changeover to the new Imperial German currency implemented at the beginning of the year.  The new postage stamps featured the denomination in both British currencies and in the new German Imperial currency. A set of new postage stamps was issued in the year 1875. The stamps depict the same effigy of the Queen; however, they show a little difference. The description of this lot is as follows: 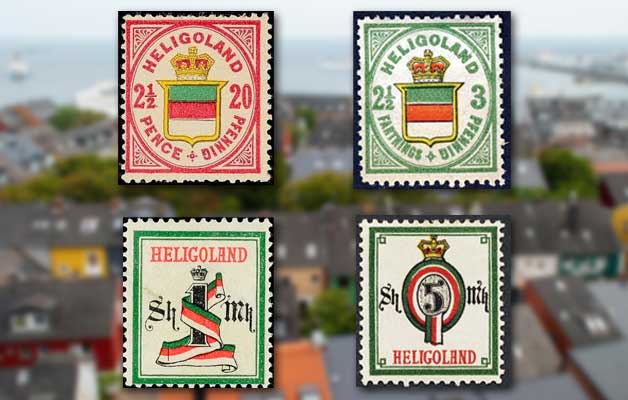 The image shown above exhibits new stamps issued in the year 1876 and in 1879. In June 1876, Helgoland issued two new definitive stamps that featured the arms of the island state. The two stamps, like the 1875 issues, were dual denominated in both British and Imperial German currency. The stamps were issued with the denominations of 3 German reichspfennig and 20 German reichspfennig. They feature the coat of arms of the country which has the national flag in the centre and a crown on the top. The coat of arms is surrounded by an oval vignette which has the name of the country on top. Coat of Arms is flanked by the denomination value both in both British and Imperial German currency.

The second set of two stamps shown in the above image is known as the numeral issue which was issued on 10th August 1879 and September 1879 respectively when Helgoland became part of the German Empire in 1890. Those were the high denomination definitive stamps. The designs feature large, ornately decorated numerals of value in centre. Flanking the number, are the British and Imperial German denomination names i.e. Sh (Shilling) on the left and Mk (Mark) on the right. The stamps were issued with the denominations of 1 Mark and 5 Marks.

The last stamp of Helgoland was the reprint of a previous stamp. In August 1890, a stamp with the denomination of 5 German reichspfennig (originally issued in 1875) was reissued. Along with this the 1 German reichsmark stamp (originally issued in 1879) was planned to be issued however the stamp never came out in the circulation. So, the 5 German reichspfennig stamp on 1890 ends the story of “Stamps of Helgoland”. These handfuls of philatelic releases show that little chapter in the history of not only of this tiny little Island but also of the countries involved in it. Heligoland is now a holiday resort and enjoys tax-exempt status, as it is part of the European Union but excluded from the EU VAT area and customs union.

[1] Head Type 1 – has a solid round knot of hair hanging from Queen Victoria’s chignon. The base of the neckline is rather pointed and symmetrical.

[2]  Head Type 2 – has a hanging curl open towards the neck and is shaped rather like a sickle or the tip of a corkscrew. The neckline is rounded slightly upward and the underside of the neckline is concave

[3] Head Type 3 – has a short curl pointing to the neck and it may be compared to a spigot or a tongue. The neckline comes to a sharp point and is convex on the underside.