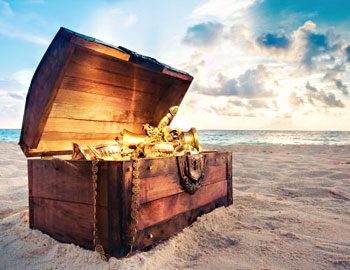 And what’s the best place to observe these arts than at the museums! Museums are repositories of the artistic, cultural, tangible and intangible heritage of a country. India being a country of much-celebrated history and past, has innumerable artefacts of beauty and importance. To explore and honour this diversity of artefacts, India Post has issued four commemorative stamps. Let’s see these national treasures on stamps that are exhibited in the museums from across the country. 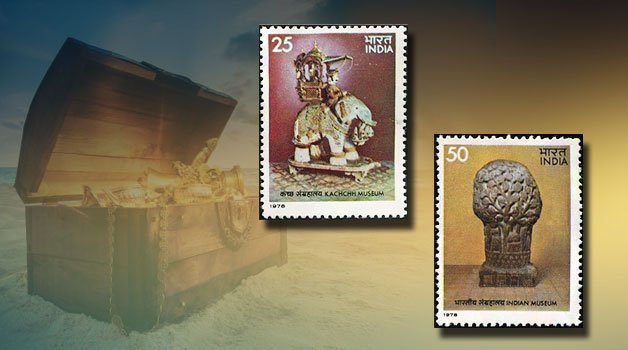 a) Airavat: The 25p stamp depicts the “Airavat” from the Kutch Museum, Bhuj. This Airavat which was made in Mandvi in the 18th CE is associated with the Hindu Lord of thunder and lightning, Lord Indra. Airavat or a white elephant with seven trunks and big ears is his vahana (mount). Lord Indra features in the ancient lores of Hinduism, Buddhism, and Jainism. The figure of this mythological white elephant with seven trunks, mounted on wheels is from a Jain temple in the Gujarat region which is well-known for wood carvings and wooden architecture. Its body is painted in the local kamagiri style with flowers and creepers.

Founded in 1877, the Kutch Museum is one of the oldest museums of India. It has the largest existing collection of Kshatrapa inscriptions as well as examples of the extinct Kutchi script (the language is written with Gujarati alphabets now) and an interesting collection of local coins.

b) Kalpadruma: This 50p stamp shows a “Kalpadruma” which is a unique wooden sculpture from 2nd century BCE. Discovered by Sir Alexander Cunningham who was known as the Father of Indian Archaeology, this Kalpadruma is said to have once decorated the capital of a column at Besnagar, Vidisha district in Madhya Pradesh. Today it finds a protected residence in India’s very first museum, the Indian Museum, Calcutta! This Kalpadruma, sometimes also called as Kalpavrishka, is from the Shunga period and is said to represent the wish-fulfilling tree of ancient traditions. It is decorated with treasures such as sankha (conch shell), Padma (lotus), two vases pouring coins and four purses with strings tied around their necks. The column, of which this capital was a part, may have adorned a shrine of Kubera, the God of Wealth.

Founded in 1814 by the Asiatic Society of Bengal in Kolkata (Calcutta) India, The Indian Museum is the largest and oldest museum in India. In 2014 Indian Museum completed its bicentenary (200 years)! 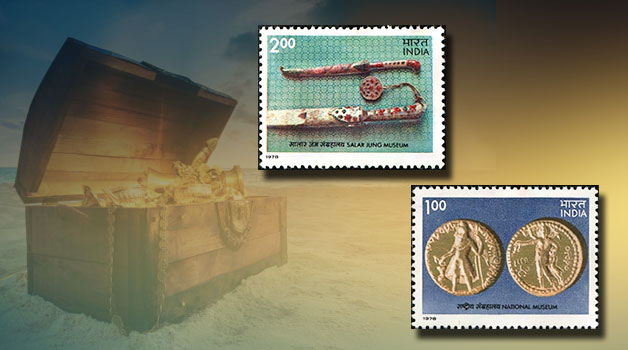 c) Dragger and Knife: The Rs. 2 stamp shows two jewelled arms that are now exhibited in the Salar Jung Museum, Hyderabad. These beautiful objects are believed to belong to the Mughal Emperor Jehangir and his wife Nur Jahan. Though a lack of inscription on either the object makes it difficult to prove the ownership, the arrangement of precious stones and the exquisite workmanship point to typically Mughal workmanship of the 17th century. The handles of both the dagger and the knife are made of white jade encrusted with flowers of ruby and leaves of emerald. The pendant attached to the dagger is shaped like a flower in white jade and encrusted with floral motif carved out of rubies and emeralds.

The Salar Jung Museum is the third largest museum of India, housing around 1.1 million objects of national importance in their collection!

d) Kushan Gold Coin:  This Re.1 stamp has a Gold Dinar of Kanishka I dating to 1st CE depicted on it. Kanishka I was one of the greatest rulers of Kushana dynasty (127 CE–150 CE). Kanishka I being famous for his military, political, and spiritual achievements has been vital for constructing the dynastic history. His coins, mostly issued in gold and silver, are one of the best specimens you can ever see! This coin from the National Museum, New Delhi depicts on its obverse Kanishka I standing facing left offering oblation in a fire altar, holding goad in one hand and spear in another. A bactrian inscription “ϷАОΝΑΝОϷАО ΚΑΝΗϷΚΙ ΚΟϷАΝО” meaning king of kings, Kanishka Kushan is seen around the king. The reverse bears the deity Oesho (Shiva) standing with four arms, holding an elephant goad and a water pot in lower right hand, and thunderbolt in upper right hand, trident in upper left hand and an animal by its horns probably a goat in the lower left hand. Bactrian inscription to right “OHϷo”.

Since its establishment in 1949, the National Museum has a lot of artefacts and presently holds approximately 2,00,000 objects of a diverse nature, both Indian and foreign, covering a time span of more than five thousand years of Indian cultural heritage!