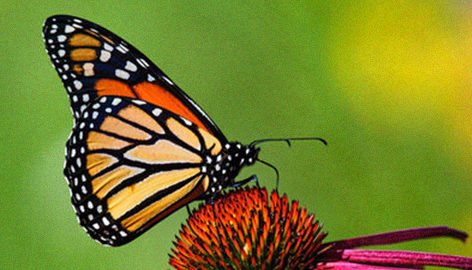 A butterfly is one of the most beautiful insects we have ever seen on Earth. These tiny little flying creatures are known for their beautiful vibrant colors and we all just can’t take our eyes off them! In an attempt to commemorate the butterfly’s species unique to India, India Post had issued various stamps. Today we take a look at eight beautiful stamps of India featuring butterflies. 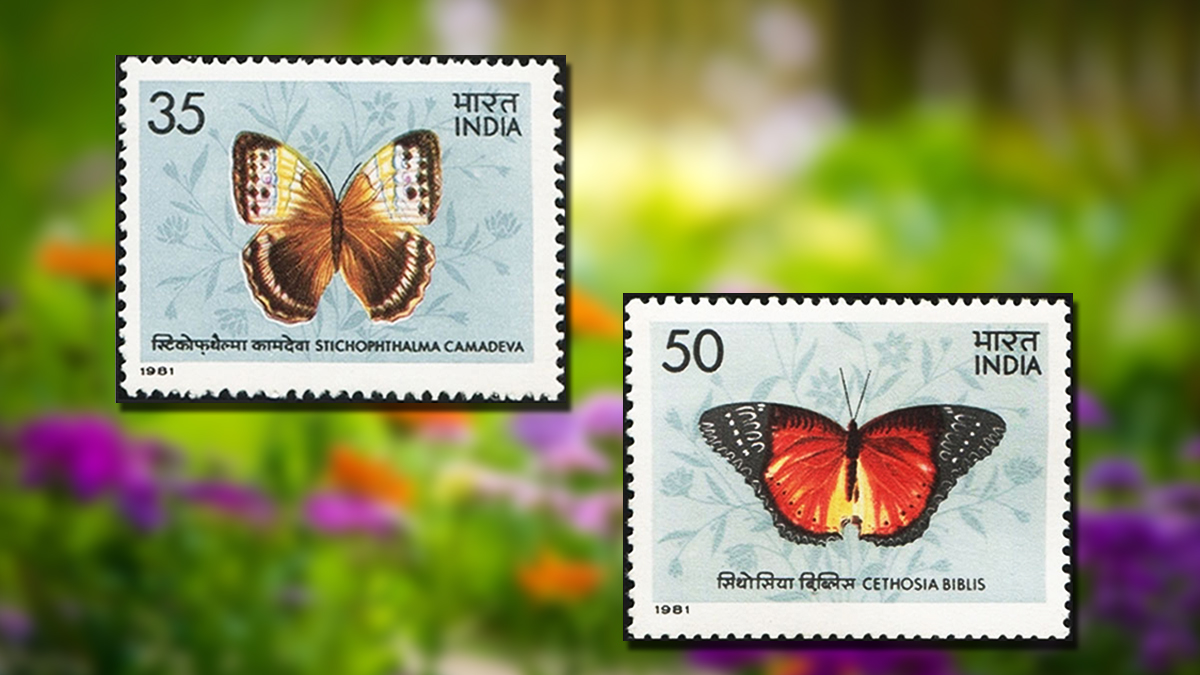 Regarded as the Northern Jungle Queen, Stichophthalma Camadeva is a butterfly found in South Asia, most notably in India, Myanmar, and Thailand. It frequently forested hilly regions of Sikkim. The marking and colors on its wings are predominately shades of brown on the upper side and yellow on the under.

These Butterflies belong to the Morphinae subfamily of the brush-footed. Their hind wing’s topsides are primarily chocolate-brown, shading into a pale bluish white toward the wings’ margins. The ratio of chocolate-brown to pale bluish white on the hindwings is relatively reversed on the forewings. This beautiful butterfly featured on Indian stamp issued 1981.

Beautiful species of Heliconiine Butterfly, Cethosia Biblis can be found in Indian subcontinent westwards to South East Asia and East Asia.  This glorious butterfly is also known as the Red lacewing because of the intricate patterns on its wings. It is a medium-sized butterfly, with a wingspan reaching about 8 to 9 cm. In the males, the dorsal sides of the wings are bright orange-red, framed by a black outline with the spots. The undersides range from bright red to pale brown, interlaced by black and white.

In India, it is found in Andaman and Nicobar Islands, Assam, Sikkim and the adjoining regions. Out of all the stamps of India that were issued in 1981, one of the features this colorful Butterfly.

Cyrestis Achates is a rare species of the Nymphalidae family which generally found in South East Asia. It lays eggs on the underside of Banyan and related species of Ficus, on which the larvae feed in large groups.

This is a well-known number of the map butterflies because the wing markings imitate the lines of latitude and longitude of a world map. It settles on the underside of leaves with wings spread like a grounded airplane.

Cyrestis Achates has been depicted on one of the latest stamps of India Featuring Butterflies. If you like collecting stamps of India featuring butterflies on them then you should have this one in your collection.

Another beautiful creature, Teinopalpus Imperialis is a renowned member of swallowtail butterfly. Also known as the Kaiser-e-Hind, it is a superb green, black and orange tailed butterfly which is generally found in Nepal, Bhutan, and Eastern Himalayas in India. It is also found in northern Myanmar, northern Vietnam and in the Sichuan province of China. This butterfly is restricted to mountainous wooded districts, where it flies high in the canopy of broad-leafed evergreen forest.

The females with a wingspan of 11-12 centimeters are slightly larger than the males and have three wing tails instead of one. The Kaiser-i-Hind is much sought after by butterfly collectors for its beauty and rarity. This beautiful butterfly was also depicted on a stamp issued in 1981.

The best way to protect this species is to protect the forest habitat where it remains and impose collecting restrictions. 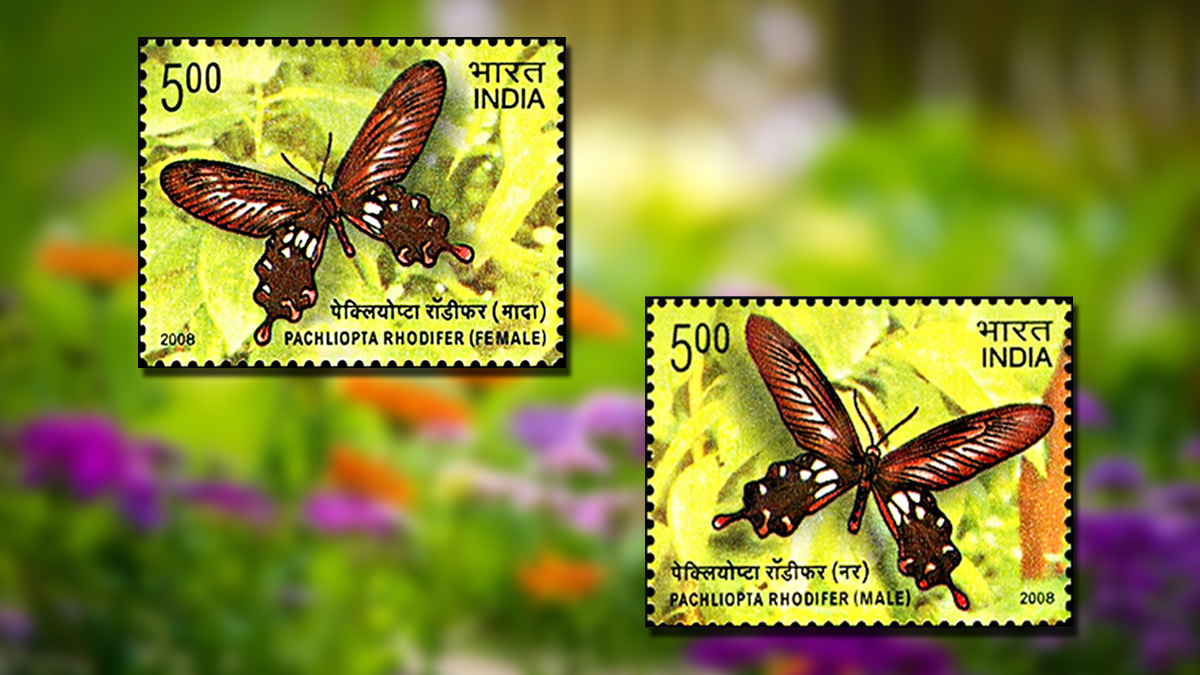 The Andaman club tail, Pachliopta Rhodifaer (Butler), is one of the endemic butterflies of the Andaman and Nicobar islands. This elegant red bodied swallowtail, with its unique red spatulate tail, previously was known only from the image.

Wing expanse of male 12mm while that of the female is 140mm. the body of the male is red upper side black; forewing has pale streaks extending up to of cell; antediscal spot extends well below vein. The female is similar to the female of Andaman Mormon and flies together in forest paths. This endemic species used to be very common in the ’80s in south Andaman but nowadays it is rarely sighted.

Indian Postal Department has issued a miniature sheet consisting of 4 commemorative postage stamps on the Endemic Butterflies of Andaman & Nicobar Islands. Pachliopta Rhodifer (male and female) is one of them. 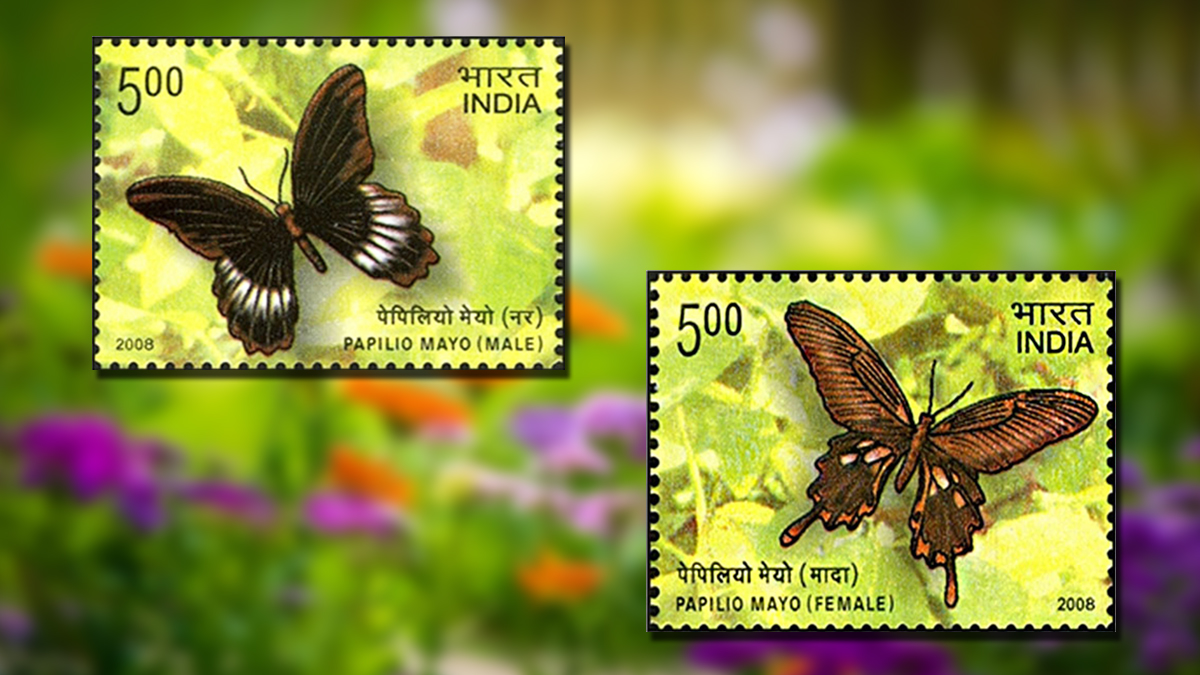 The second commemorative stamp in the series of Endemic Butterflies of Andaman & Nicobar Islands depicted the Papilio Mayo. The scientific name honours Richard Bourke, 6th Earl of Mayo, who was assassinated at Port Blair the year before the butterfly was discovered.

Also known as the Andaman Mormon, this species is protected by Indian Law. The wingspan is about 11-12 cm. The basic of Papilio mayo is black. A broad cyan band dominates the hind wing. Next, to the body, there are two red spots. In the middle of the wing, there is a fine band of red and blue scales. At the inner edge, there are two red eyes.

If you are someone who likes to follow themes while collecting, then your “butterflies” theme cannot really miss out on these majestic stamps of India featuring butterflies. The magnificent beauties of these butterflies with their endless variety of hues and patterns have provided the theme for poetry and lore. Their grace and beauty have inspired artists of all ages. It is unfortunate that many species of butterflies are in danger of disappearance due to the ruthless devastation of their habitat by man. It is with a sense of serious concern for them that the India postal department brings out a set of stamps on butterflies endemic to the Indian Subcontinent.

Happy collecting, come back for more such informative articles on stamps, notes, and coins only at Mintage World!