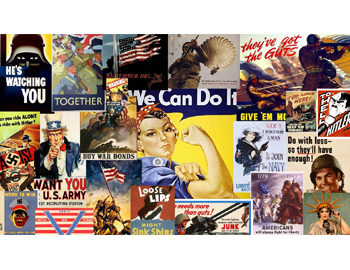 Ideas, information and rumour just need an easy and common communication medium to reach to the masses. This kind of schemes is tried by nations, individual or a group to form, control, or alter the attitudes of others through communication with the intent that in any given situation the reaction of those so influenced will be manipulated as the propagandist desired. The most common method used to propagate these notions is through banknotes called Propaganda Banknotes. In the previous blog, we discussed the different banknotes used as a piece of communication. Lets further discussed on these propaganda banknotes that are as also affect the world history and acted as a weapon in the war tactics. It is also interesting to observe how these notes were upgraded and how many countries used them as a medium to propagate their propaganda strategies.

The message on such banknotes can be conveyed in funny, serious, accusing or blaming manner, the idea is to change the opinion of the people regarding certain event or person, organization and Government. It can also be against a nation itself, the tool is simple, but its fatality rate is tremendous. From these propaganda banknotes, one can only say that, do not underestimate their power of gossiping! 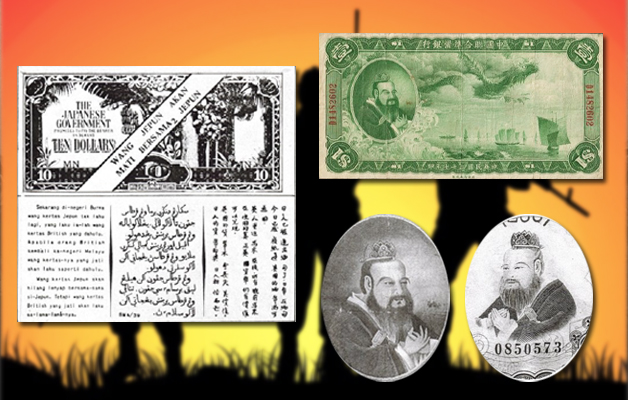 At the end of World War II to fasten the fall of imperial Japan, the Allies commenced air-dropping propaganda notes over Japanese occupied territory in a large separated geographic location in Southeast Asia.

The first action of propaganda banknote activities started when it was an airdrop over Singapore and the Malayan States during1944 and 1945. The British selected the Japanese Government 10 dollar Malayanoccupation note for their propaganda message. Printed on Psychological Warfarepresses in Calcutta, India, these notes when ready were delivered to various Royal Air Force bases in India and Burma. From there they were delivered over the target area by the 231st Wing of the RAF.

The purpose of the propaganda message was to undermine Malaysian confidence in the Japanese and their money. The obverse of the genuine Japanese occupation 10dollar note was altered by adding a diagonal stripe to the photogravure facsimile which read in Malaysian “Wang Jepun Akan Mati BersamaJepun” (Japan and its Japanese money will soon disappear). The reverse of the facsimile contains three columns of text, in Malay, Arabic and Chinese. The translated text illustrated on the banknote reads “Japanese notes are no longer being used in Burma. The only legal, money now being used is British. When the British return to the Malay States, their currency will become valid again as before. Japanese notes will forever disappear together with the Japanese, but genuine British notes will be used forever”.

Chinese Cause their captors to ‘Lose Face’

The Japanese desired to expand their influence on all Asia and initiated a full-scale attack on ill-prepared Chinese in 1937. To do this they staged an “incident” at the Marco Polo Bridge outside Peking, provoking Chinese troops to fire upon the Japanese, thereby justifying the subsequent invasion and occupation of North China. Japan’s North China Expeditionary Army quickly overran the Northern provinces. A puppet government, known as the Provisional Government of North China, was then set up to administer the area. The newly created Federal Reserve Bank of China was its financial arm. The banknotes initially were printed by the Bureau of Engraving and Printing in Peking. These well-executed notes are fine examples of the engravers’ art. They depict many well-known Chinese places, including the Forbidden City, the Marco Polo Bridge, Great Wall of China and the Summer Palace. By using so many images associated with Chinese culture, the Japanese no doubt was currying favour with their newly “liberated” subjects.

After invading North China in 1937, the Japanese puppet government set up the Federal Reserve Bank of China as its financial arm. The 1938 series of notes featured Confucius hurling an insult at the Japanese by using an indecent gesture with his hands. Confucius was traditionally shown with his hands clasped in prayer, as seen at right. 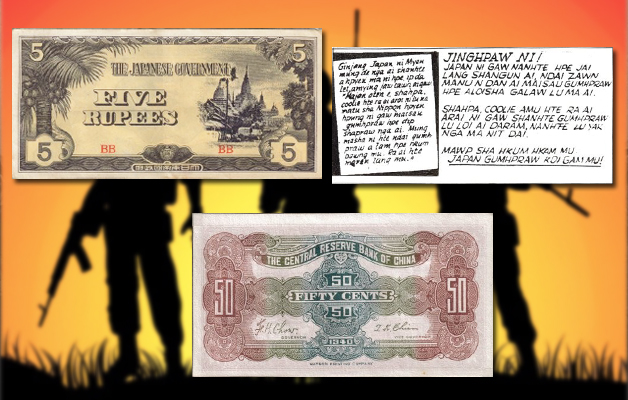 The United States was soon directing its propaganda at the Japanese homeland. Four different replicas of the Japanese 10 yen note then in circulation were produced. All have the same block and serial number – block 1124, serial number 450941. These notes were extremely well made and when falling face up on the ground appeared quite genuine. These bills were eagerly picked up by the Japanese, who must have thought it was their lucky day. It was not until the finder turned them over, however, did he realize that he had not found real money but a piece of propaganda instead. The propaganda messages were directed at the civilian population and concerned, such subjects as the cost of food, taxes and the value of the yen.

The four notes differed only in the message on the reverse. They are known by their code numbers found in the lower right corner – number 2009, 2016, 2017 or 2034. These notes, the brainchild of the Military Intelligence Service in Hawaii, were airdropped over Japan in large quantities. Hence it is still possible to encounter specimens today. The messages they contain are worth repeating as they give us a good insight into how we attempted to undermine Japanese morale.

Toward the end of the war in the Pacific theatre, United States psychological warfare units desired to inform the remote Kachin hill people of Burma that their Japanese money was worthless. To do this they created bogus Japanese Government 5 rupee notes with various propaganda messages on the reverse. These were then airdropped to the Kachins from Allied bases in Burma and China.

Chinese Cause their captors to ‘Lose Face’ part II

Central Reserve Bank of China notes is famous for its clandestine propaganda messages. In an effort to boost morale during the worst of times, Chinese engravers working for the Japanese cut hidden messages into the engraving plates. This was done at the risk of their lives. The 10 yuan note of 1940 has a series of bisected turtles as part of the border design. These animals were held as loathsome by the Chinese – an obvious reference to their contempt for the Japanese oppressors. In another example, the Chinese engraver secreted a propaganda message into the obverse and reverse plates used in printing the 50 cent note dated 1940. With the aid of a magnifying glass, it is not too difficult to find a number of Chinese characters hidden in the bushes and trees surrounding the mausoleum and among the scroll-work and borders on the back. Similar secret marks have been found on the 5 cent note of the same series. When arranged in the proper order, the letters “C”, “G”, “W”, “R” and “S” hidden on the reverse spell out the message “ Central Government Will Return Soon”. Circulation of massive amounts of this currency under the very noses of their Japanese oppressors, without discovery, must have boosted morale considerably among the suffering peasants. One can only hope that that responsible escaped detection and punishment by the Japanese. 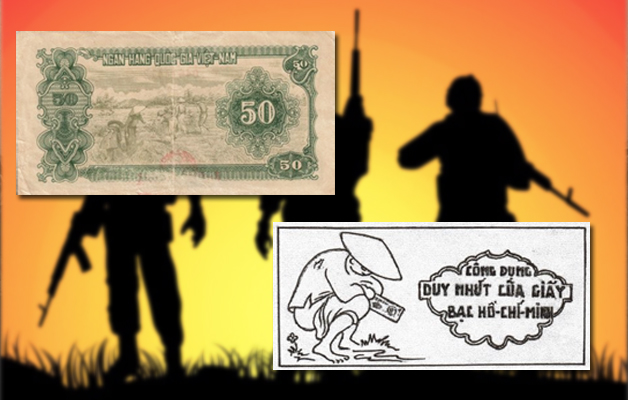 As soon as World War II came to an end, and long before the United State entered the war in Viet Nam, France attempted to re-establish control over its former Southeast Asian colonies. From 1946 onwards the French army was actively engaged in suppressing the Vietminh communist factions in Viet Nam, Laos and Cambodia in an effort to save French Indochina.

The French propagandized this North Vietnamese 50 dong note by creating a facsimile in which the image of Ho Chi Minh was dropped from the front of the note. A crude picture of a peasant with a North Vietnamese banknote in his hand was substituted instead. The propaganda message left no doubt as to what he should do with it.

There are innumerable examples of the propaganda banknotes even used after the World War. Throughout Asia, there were various countries that issued these propaganda banknotes. Duplicity and propaganda had been around since ancient times. One can use many things for the propaganda, but the most brilliant way to convey one’s message is to use a medium that is used by people on daily bases, a medium that can be easy without any kind of problem. There are many historical facts attached to these notes because in war a message conveyed an idea formed can turn the tide of all the wars. So it’s essentially the most common way of communication was used.

THE USE OF BANK NOTES AS AN INSTRUMENT OF PROPAGANDA
PART II
John E. Sandrock