Coins, Stamps, and Banknotes not just make great collectibles but also offer a solid platform that stimulates the curious minds. However fascinating is keeping a collection, having more than one hobby can be a little bit exhausting and expensive. What if two hobbies are spliced into one? The Curacao Post has brilliantly combined Notaphily with Philately together which yielded an amazing result. World’s most peculiar hobbies i.e Notaphily – the study of banknotes – and Philately – the study of postage stamps are brought together by Curacao’s Post. ‘Curacao’s Stamps with Banknotes’ is an interesting chapter for those who wish to collect both Notes and Stamps in one go.

Curacao is a land of mystery to many. This tiny country is a part of Lesser Antilles Island in the southern Caribbean Sea and the Dutch Caribbean region. It is a constituent country of the Kingdom of the Netherlands. The unusual name of this country has even more unusual story behind it. In the 16th and 17th centuries, sailors on long voyages would get scurvy from lack of vitamin C. According to some accounts, Portuguese sailors who were ill were left at the island now known as Curacao. When their ship returned, they had recovered, likely cured of scurvy, probably after eating fruits with vitamin C. From then on the Portuguese referred to this place as ‘Ilha da Curacao’ (Island of Healing).

Though the Portuguese traveled in and out of this Island from time to time, the history of Curacao goes way back in time: to 1634, to be precise, when the Dutch established the colony of Curacao. The Dutch West India Company (formally Geoctroyeerde Westindische Compagnie) was given a charter for trade between the Netherlands, the West Indies, and Surinam. Thus, the Dutch West India Company became accountable for delivering mail between the Netherlands and Curacao. However, it was the British who provided a post office at Willemstad to serve Aruba, Bonaire, and Curacao and began the occupation of Curacao in the mid-1807. Over the time, the stamp of Curacao underwent many changes along with the changing administrations.

A new constitution in effect in May 1948 gave Curacao the greatest autonomy possible while still retaining Dutch rule. At that time, Curacao and related islands were renamed “Netherlands Antilles.” The little Island named Curacao became a constituent country of the Kingdom of the Netherlands until the dissolution of the Netherlands Antilles came into effect on 10 October 2010. Curacao became a country within the Kingdom of the Netherlands, with the Kingdom retaining responsibility for defense and foreign policy as well as issuing of the legal tender. Today, this tiny country issues its own stamps bearing its own country name. Here’s the further discussion about Curacao’s Stamps with Banknotes. 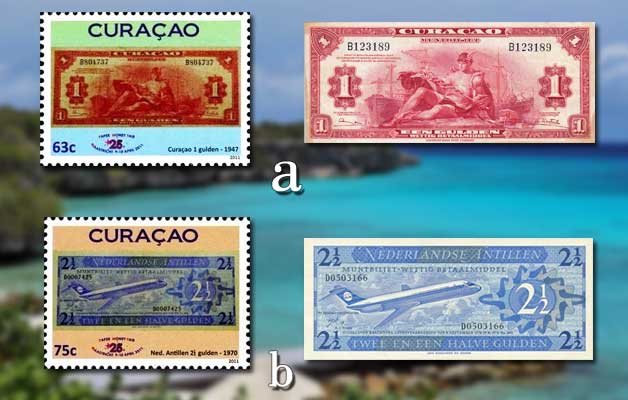 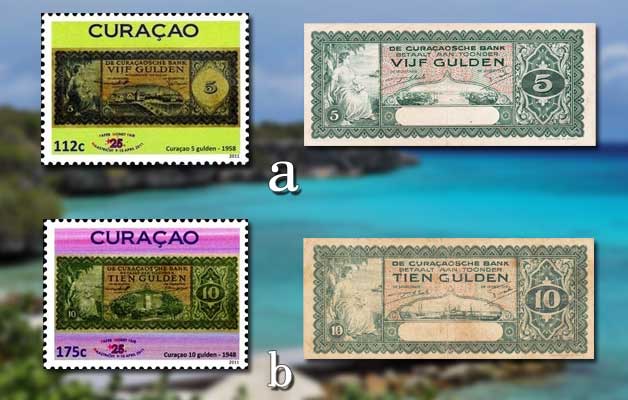 Note: The notes basically have the same design with few changes like the denomination as well as center design. This note is a testimony of the development of the country on the basis of infrastructure. 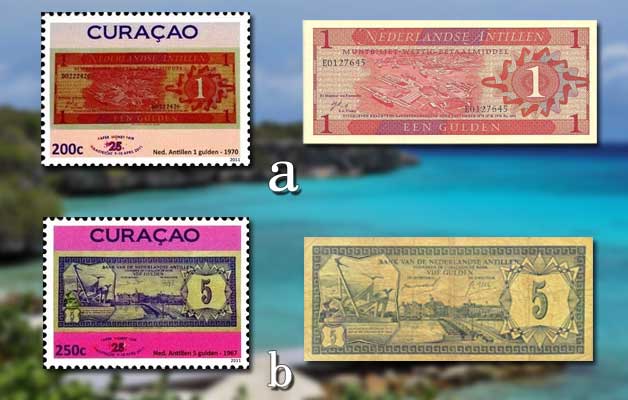 Note: Monument “Steunend op eigen kracht” or the Monument for Autonomy symbolizes the autonomy of the 6 islands of the Netherlands Antilles. The 6 birds represent the 6 islands viz. Curacao, Aruba, Bonaire, Sint Maarten, Saba, and Sint Eustatius. The 5 gulden note of 1967 donates the principal island i.e. Curacao. 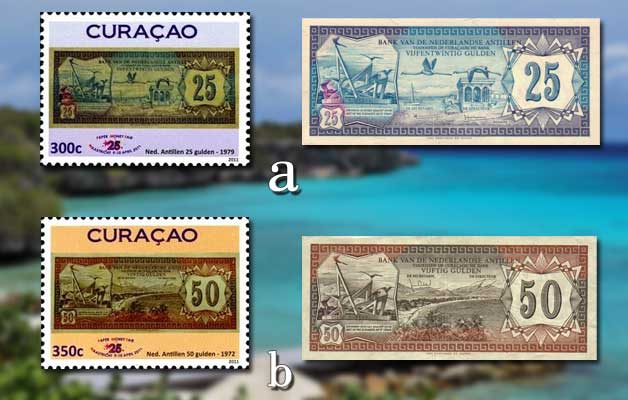 Note: This set of stamps indicate the islands of Bonaire and St. Maarten on the 25 Gulden and 50 Gulden banknotes respectively. 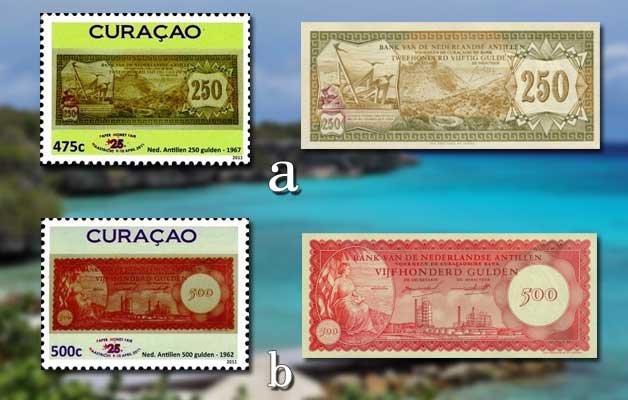 Note: This set of stamps indicate the islands of Saba on the 250 Gulden banknote.

For the last 8 years, Post Curacao issued a number of stamps showcasing the uniqueness of the country. Even when Curacao is advancing towards the glorious future, the country is holding on to its past legacies. “Curacao’s Stamps with Banknotes” is a solid enough proof that the country is proud of its bygone era. On 11th April 2011, when the country was barely 1-year old ten stamps were published in the new (now independent) Curacao with images of older banknotes that were in circulation in the Netherlands Antilles. Curacao’s Stamps with Banknotes is a mirror that reflects the face of the country, its culture and last but not least its accomplishments.