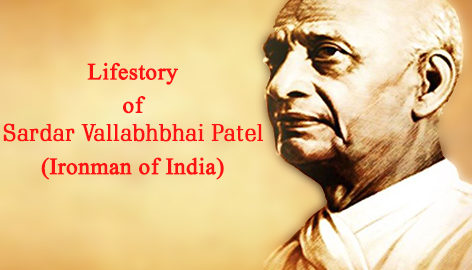 “My only desire is that India should be a good producer and no one should be hungry, shedding tears for food in the country”. Once in a generation there comes an intellectual leader and visionary, who aims for the skies while feet firmly on the ground, mind made of diamond and fists made of iron, whose passion and sharp mind sculpted today’s India. This is the Life Story of Sardar Patel narrated with the help of stamps and coins issued by the Government of India.

Born on 31st October 1875 in (Nadiad) Gujarat, he lived a simple life and had very good diplomatic skills. By profession, he was a lawyer but when he met Mahatma Gandhi he gave up his profession and took part in the Indian struggle for Independence. As he rose to fame and influence as a lawyer at Ahmedabad, Patel was elected one of the city’s Municipal Commissioners in 1915. It was about this time that he made his acquaintance with Mahatma Gandhi, which was a fateful event of his great career. Modern Indian history is incomplete without Sardar Vallabhbhai Patel. His vision, his work, and his principles were highly remarkable in Independent India. 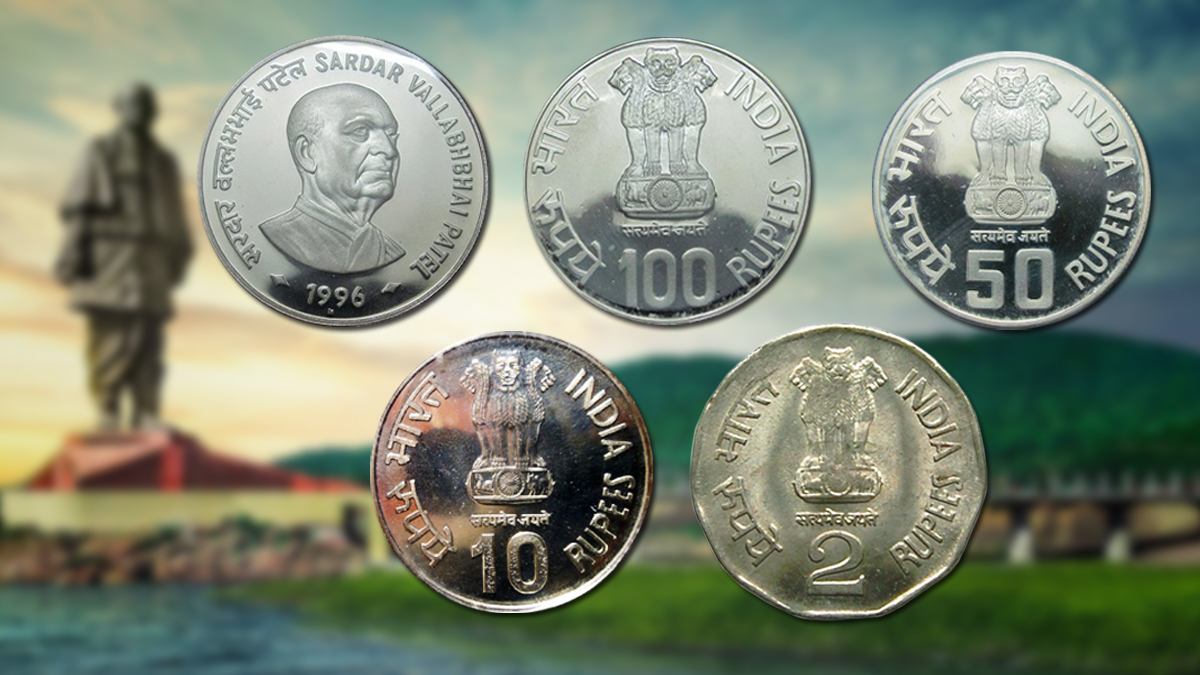 The government of India issued a set of commemorative coins to honor this great Indian Leader on the centenary of his Birth. This set was issued in the year 1996 and was comprised of four denominations viz; Rs.2, Rs.10, Rs. 50 and Rs.100. Out of these coins, the Rs.2 denominated coin is in circulation. The reverse of the coins depicts the bust of Deputy Prime Minister Vallabhbhai Patel facing right. The legend surrounding his effigy reads “SARDAR VALLABH BHAI PATEL” in Devanagari on left and Roman on the right. The year of issue is seen at the bottom. On the other hand, the obverse depicts Lion Ashoka pillar capital with the motto “Satyamev Jayate”. The denomination value can be seen below the lion capital. All of this is flanked by “BHARAT RUPAYE” on the left and “INDIA RUPEES” at the right.

Sardar Vallabhbhai Patel was an important leader of the Indian National Congress during India’s struggle for independence against British rule.  The “Freedom Struggle” Chapter of the Life Story of Sardar Patel is quite vast. He lent his active co-operation to Gandhiji for the first time in the Kaira Satyagraha of 1918. The historic agitation against Rowlatt Act initiated by Mahatma Gandhi in 1919 brought Sardar Vallabhbhai Patel into prominence as a popular leader in Western India. Then came Non-co-operation in 1920, which Vallabhbhai Patel wholeheartedly joined by giving up forever his highly lucrative practice.

Here on the Life Story of Sardar Patel keep on expanding Further, he successfully led several Satyagrahas such as Nagpur Flag Satyagraha, Bardoli Satyagraha Movement, the Civil Disobedience Movement, and the Quit India movement.  In September 1946, Sardar Patel becomes a minister of the Indian Interim government formed then with Sri Jawaharlal Nehru as Prime Minister. 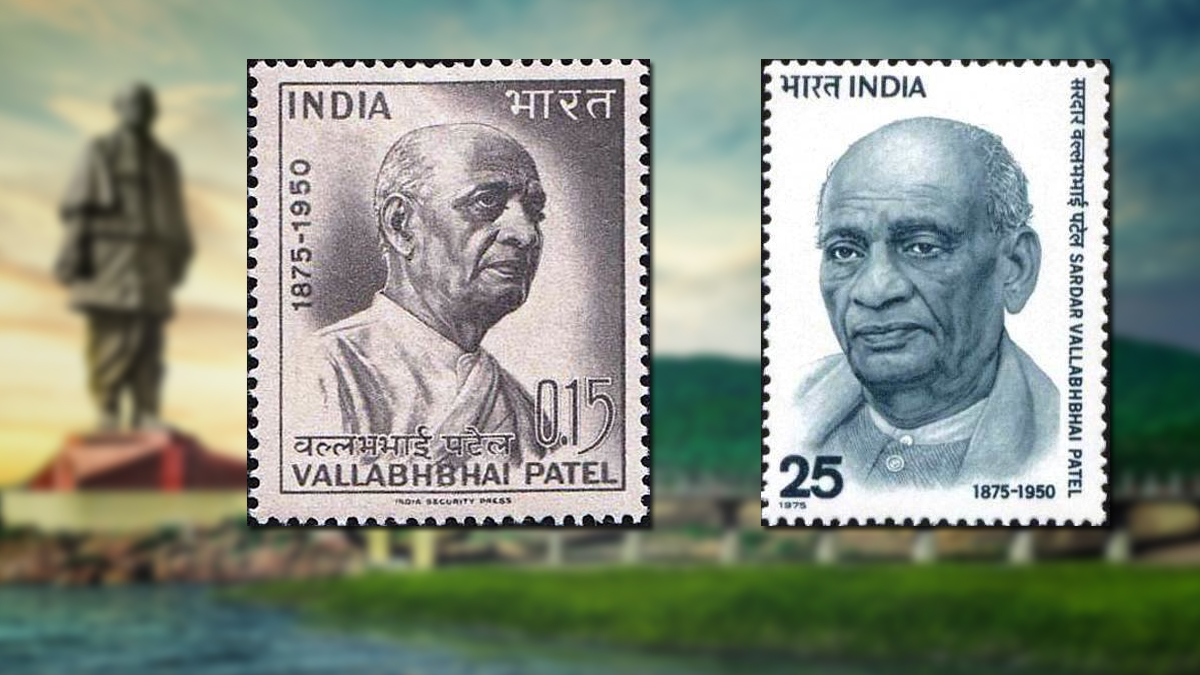 India Post also commemorated the Birth Anniversaries of the “Iron Man of India”.

1) In the year 1965, India Post issued a 0.15 Indian rupee coin to commemorate the 90th Birth Anniv of Vallabhbhai Patel. The stamp depicts the 3/4th right-facing portrait of Sardar Patel with his name inscribed in both Roman and Devanagari at the bottom.  The name of the Country is at the top corners and the denomination value at the bottom right corner, whereas the years 1875-1950 are on the left of the stamp.

2) The other stamp was issued in the year 1975 to honor the Birth Centenary of Sadar Patel. The stamp depicts 3/4th Facing bust of Vallabh Bhai with his name inscribed in both Devanagari and Roma on the right with the year of his birth and death besides. The Denomination value of 25 Paise along with the year of issue is seen on the bottom left corner of the stamp while the name of the country in Roman and Hindi is seen at the top left corner.

At the time of the transfer of power from the British to the Indian Union on 15th August 1947, Sardar Vallabhbhai Patel, the Indian ‘Iron Man’, became India’s Deputy Prime Minister and took charge of the Home and States Departments of the free Indian Government. When our country became independent in 1947, Sardar Patel was appointed as the Deputy Prime Minister of the country. He took over the role of a Deputy PM at a time when Indian history was in a very critical stage. After Independence, there were around 562 Princely States which were creating a major issue to merge with India. By using the policy of ‘Saam-Daam-Dand-Bhed’ (friendship, give-and-take, punishment, and divide-and-rule) and to the astonishment of his critics and fellow politicians, almost within a year, he drew a new map of India with every Princely State being a part of the Indian Union and thus, paved the way for cultural unity and harmony.

Sardar Patel, as the unifier of India, was honored on a couple of stamps of India.

1) In December 1997, the father of United India was featured on an Rs. 2 stamps, issued to commemorate the integration of the Princely States in the Indian Union. The stamp depicts a beautiful sketch of Sardar Patel along with a group of freedom fighter waving flags. The portrait of Sardar Patel is flanked by his autograph on the left and in name in Roman and Hindi along with the year 1875-1950 on the right. The name of the country and denomination value are inscribed on the top left and right corners respectively.

2) The other stamp was issued to commemorate the First National Unity Day which is celebrated on the Birth Anniversary of Sardar Patel. This stamp worth Rs.10 depicts the Statue of Unity erected at Gujarat along with his smiling portrait.  The inscription on the stamp reads “Salute to the Unifier of India” and “National Unity Day”

The Life Story of Sardar Patel doesn’t end here. Sardar Patel also shaped up Unified National Administration in India. Due to his efforts, we do have the Indian Administrative Service, the Indian Police Service, and the Indian Forest Service for the people. We cannot deny the fact that Sardar Patel had the vision to create a strong and vibrant administrative system. On the other hand, Sardar Patel’s views about border securities proved to be of great value. Patel conceptualized some of the greatest policies to keep our country secured from border countries’ attack. However, his concerns were not taken seriously by Nehruji and we had to pay a heavy price in the 1962 Indo-China war. Not only that, certain precautionary measures are taken at that point in time, as pointed out Sardar Patel could have definitely saved our country from the constant fear of terrorism today. 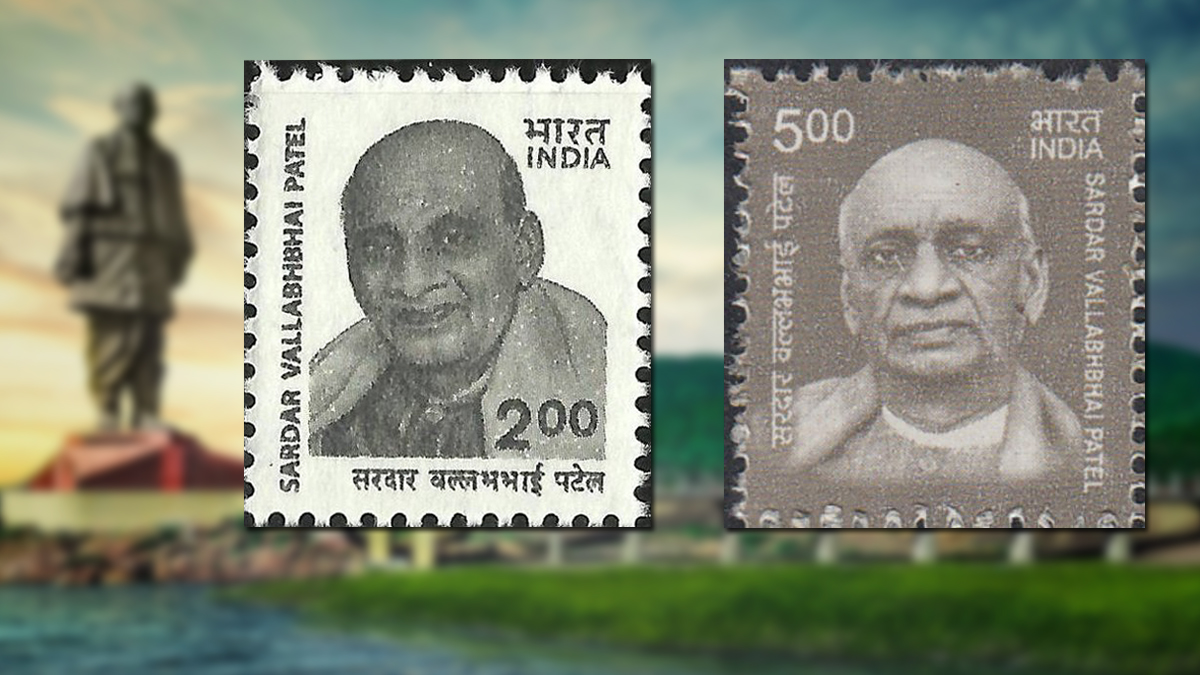 This magnificent personality of the Republic of India has also been honored with the issuance of two definitive stamps; one in the year 2000 and 2016 with the denominations Rs.2 and Rs.5 respectively. The stamps, like others, show a portrait of Sardar Patel along with his name, denomination value, and name of the country.

Variously hailed as the Iron Man of India, Mahatma’s Muscle Man, Lenin of Bardoli, Chanakya-cum-Bismarck and savior and architect of New India, Sardar Patel was a robust statesman, which was responsible for shaping India’s destiny during as well as after the freedom struggle. The Life Story of Sardar Patel is certainly inspiring!