The forest is considered as the piece of land with many trees, animals and other flora and fauna vertebrates. We all depend on the forest, sometimes in the air we breathe or in the woods to make our furniture. Forest provided habitat not only for animals but also for all living organisms. The ecosystem of forest plays a vital role in offering watershed protection, prevent soil erosion and mitigate climate change. Forest also plays a vital role in stabilizing the climate; providing food and water for all living organisms, wood products, and medicines; and for supporting the world’s biodiversity. We all depend on forests, whether directly or indirectly for our livelihood. Besides forest plays an important role in our day-to- day life we can see that the quantity of forest in getting existent. Keeping this in mind the importance of Forest America had issued coins with the theme of forest. So, today we will discuss some of the commemorative coins of the USA that depict American National Forests on coins.

The United States of America had issued all these coins with the theme of American National Forest on Coins under the ‘America the Beautiful Quarters Program’. All these coins have a common obverse with the portrait of George Washington (the first president of the United States of America from 1789 to 1797) facing towards left; with the inscription ‘UNITED STATES OF AMERICA’ at the top’ inscription ‘LIBERTY’ and ‘IN GOD WE TRUST’ written to the left and right side of the coin and ‘QUARTER DOLLAR’ written at the bottom.

The White Mountain National Forest also includes Franconia Range, Sandwich Range, Carter-Moriah Range and Kinsman Range in New Hampshire, and the Mahoosuc Range straddling the border between it and Maine.

The reverse of this coin depicts Mount Chocorua the easternmost peak of the Sandwich Range, framed by birch trees. It is an iconic view of the White Mountain National Forest system lands.

The Mount Hood National Forest quarter dollar was issued in the year 2010. The reverse of the coin depicts the image of Mount Hood with Lost Lake in the foreground. 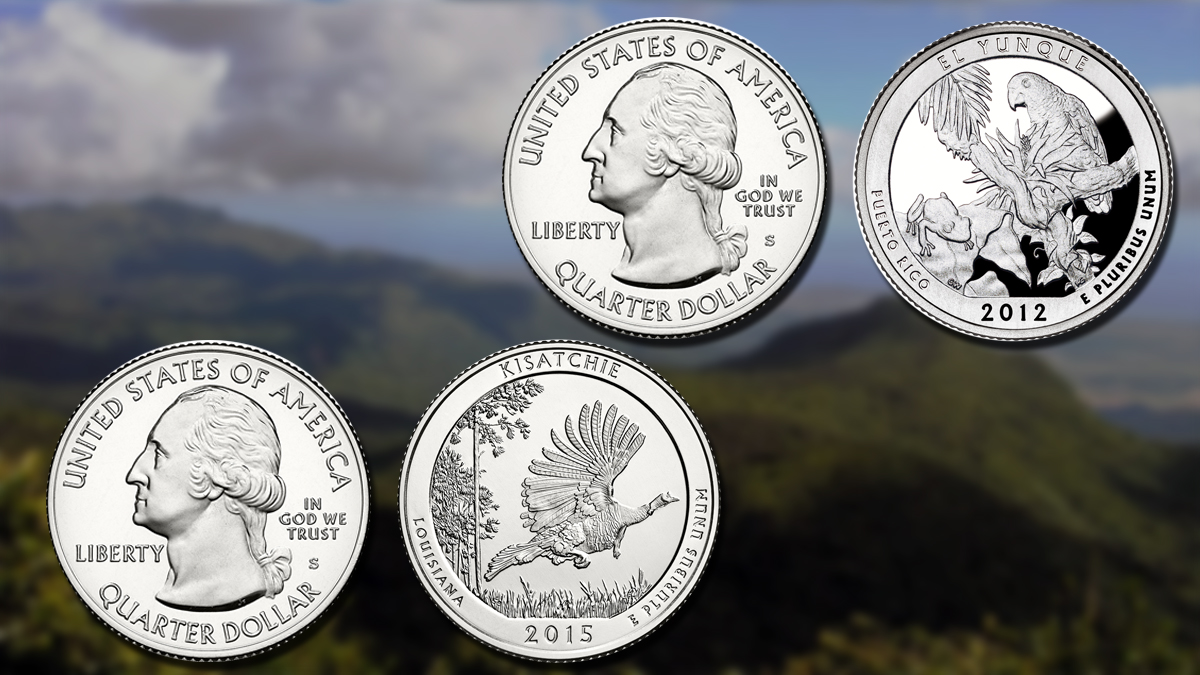 The word El Yunque in attributed to the Spanish word; it is taken approximately from the Taino Language. The word ‘Yu-Ke’ means white lands or the word ‘anvil’ which is Yunque in Spanish. This is the second tallest mountain within El Yunque is also named El Yunque.

El Yunque National Forest is located on the slopes of Sierra De Luquillo Mountains. This forest has the number of traits from which the jungle-like territory’s flora and fauna can be appreciated. The reverse of this coin depicts Coqui tree with a frog sitting on a leaf and a Puerto Rican Parrot behind an epiphyte plant with tropical flora in a background.

Kisatchie National Forest is the only National Forest situated in Louisiana, United States. It is located in the forested piney hills and hardwood bottoms of seven central and northern parishes. This National Forest is divided into five managed units called Ranger Districts that total more than 604,000 acres of public lands.

The most beautiful landscape of this forest is fishing and hunting. Some rare habitats such as hillside seepage bogs and calcareous prairies are also found in this forest. This forest also provides a buffer for Kisatche Hills Wilderness. Kisatchie Hills Wilderness is a nationally designated wilderness area that contributes to protecting biodiversity in the coastal plain region of the United States.

The United States of America had issued a commemorative coin with the theme of Kisatchie National Forest in the year 2015. The reverse of this coin depicts wild turkey over Bluestem grass with Longleaf pine in the background.

The United States of America had issued a commemorative coin with the theme of Shawnee National Forest in the year 2016. The reverse of the coin depicts Camel Rock with natural vegetation in the foreground and a red-tailed hawk soaring in the sky overhead.