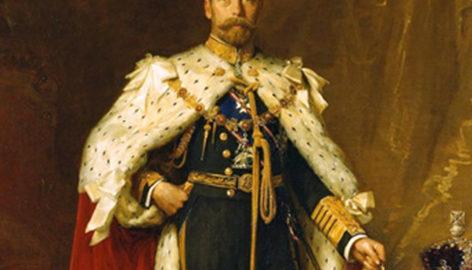 The Revolt of 1857 ended the East India Company rule and the Queen assumed authority over the India. For the next 90 years the British Government ruled about 60% of India directly and the other 40% indirectly through native princes who followed British policies. During this time India went through many changes that were not just political and administrative but also witnessed changing economy and society.

Following the shifting of power from Company to British Government, a new series of coins were issued. From 1862 till Indian independence in 1947, coins were minted under the direct authority of the Crown. The British Indian coins were minted in Gold, Silver and Copper with different obverse and reverse die varieties which are helpful in their identification. The most peculiar feature of the British coinage is that they issued coins in two systems i.e. Fractional System and Decimal System.

Coins were issued in the name of four British Kings and Queens, namely: Queen Victoria, King Edward VII, George V and George VI. In this blog we see a few coins of King George V. The coronation of King George V took place on 22nd June 1911, but George Frederick Ernest Albert of the House of Saxe-Coburg-Gotha was the unpromising son of Edward VII.

George V was not born to become a King, but his fate had some other plans….

Young George could have enjoyed a long career in the Royal Navy, lived a life as ordinary as it could get for a royal and spent his time collecting stamps. As the 2nd son of King Edward VII, he was second in line and unlikely to succeed to the throne. But fate had some other plans…

An unexpected and early death of his elder brother in 1892 put George directly in line for the throne. As the Prince of Wales, George was educated in the state affairs preparing him for his future role as the King. After the death of King Edward VII, George ascended to the throne on May 6, 1910, and was crowned on June 22, 1911.

The newly crowned King George V was the King of the United Kingdom and the British Dominions, and Emperor of India until his death in 1936. King George V and his wife, Queen Mary, visited India in 1911, the only monarch to do so as King-Emperor.

His reign saw some challenging times, all of which radically changed the political landscape. Constantly fraught with difficulties, he had to face some challenging shifts in political, social and economic ideologies. The Indian national movement too was gaining impetus, the world was still recovering from 1st World War as a second and far more disastrous war was lurking around the corners.

In spite of all this, he was adored by the public and in 1935 the king celebrated his Silver Jubilee, an occasion of great public rejoicing. He died on 20 January 1936 and was succeeded by his son Edward VIII.

With the increase in price of silver during the 1st World War, his reign saw introduction of new base metal coins to join the earlier issues in copper, bronze, silver and gold. The coins were minted with the effigy (portrait) of King George V on Farthing, Penny, Pence, Shilling, Florin, Crown and Sovereign. During his reign, the coins issued for use in commonwealths had different denominations, for e.g. In India coins were issued in the denominations of rupee, half rupee, quarter rupee and two annas (in silver), and 1/12 anna, half  pice, quarter anna, one anna, two anna and four annas (in copper).

King George’s coinage had a few beautiful varieties. Let’s see the ones that made news because of their designs, execution and rarities! 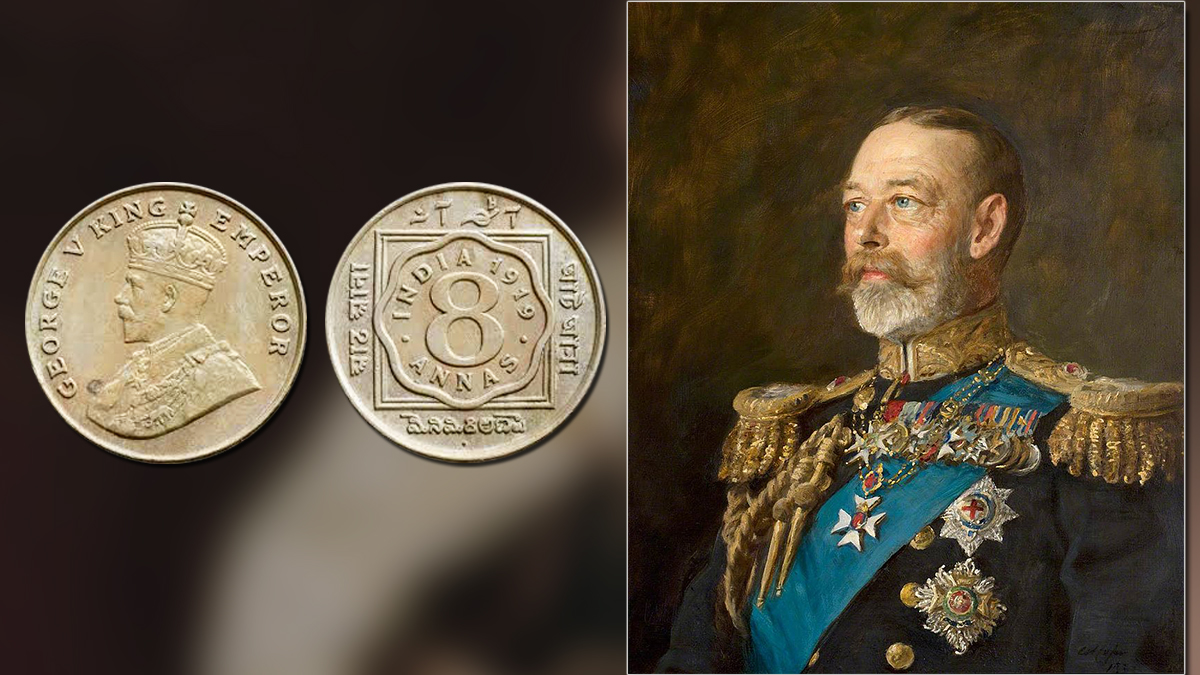 This 8 Annas or ½ rupee Copper-Nickel coin weighing 7.77 g has on obverse the right-facing profile of King George V with the Imperial crown. The inscription around the bust reads “GEORGE V KING EMPEROR”. The reverse of the coin bears a scalloped circle within double squares. But the unique feature of this 8 Annas is that it has the denomination written 5 different languages!

The languages are Persian, Bengali, Telugu, Devanagari and English inscribed in the margins between square and the raised rim of this coin. This coin was minted in Bombay during 1919 and was introduced to replace the silver half rupee coin due to the increasing price of the silver. It was not very popular so it was discontinued and withdrawn from circulation but till 1920 it was only minted in Bombay.

A unique variety of King George coin is a 4 Annas Cupro-Nickel coin minted in 1919. This unique coin is probably one and only example of a Triangular shaped pattern coin. Minted in Calcutta in the year 1919, this triangular coin possibly has rounded corners.

This coin has one its obverse bust of the king wearing a crown facing left. A legend reads “George V” to left, “King Emperor” to right and “India” below. The reverse has “4 Annas” within a triangle with denominational value in 4 languages around it” Urdu on top, Telegu below, Nagari to left and “Bengali” to right. [1] 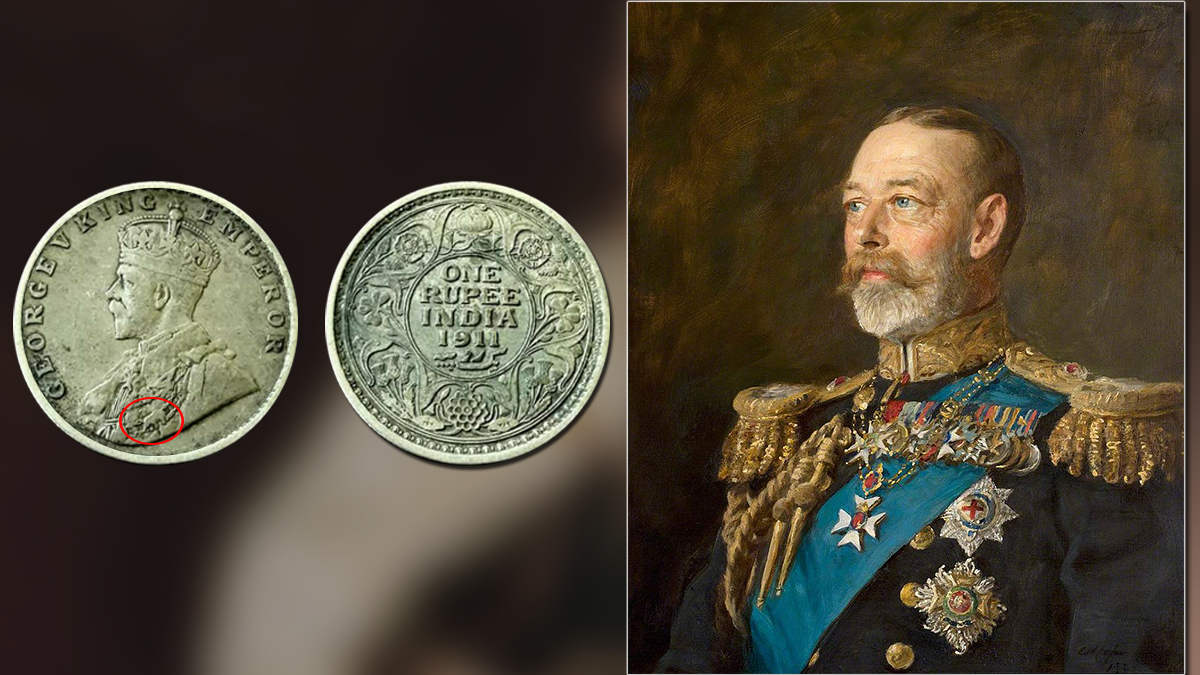 In an attempt of fitting an elephant on small coins the trunk of the elephant was shortened, its legs made stout and body fatter. The trunk ended up looking like a pig’s snout. The elephant that was to adorn on the King’s robe now looked like a pig! Such coins came to be known as the “Pig Coins”. The British withdrew these new coins from circulation and melted the withdrawn coins. Subsequent coins issued from 1912 onwards featured a redesigned obverse side. This time it was clearly an elephant, with proportionate trunk, tusks and legs.

Very few pieces of the “Pig Rupees” remain and they are now much sought-after collector’s items. Can you spot the pig/elephant on this coin?

Round with central piercing:

A rare coin from King George V is a Cupro-Nickel pattern coin. This coin minted in 1918 is a round coin with a central piercing. This unique coin was minted in Calcutta and is probably the only known specimen in this variety.

The obverse has the legend “George V King Emperor” above the hole and below the whole there’s “INDIA 1918”. The reverse has a large numeral “4” to left of the central hole. The word ANNAS above, and the value in Nagari below with denominational values written in Bengali, Urdu and Telugu around.[2]

No image of this specimen is available.

Yet another extremely rare specimen of King George’s coin is a Cupro-nickel star shaped coin. This is a coin that has 8-pointed-star shape and the denominational value of the coin is of 2 Annas. The coin was minted in the year 1919.

Displayed in the Alipore Mint cabinet, this is a pattern coin minted in Calcutta. Unfortunately, there are no pictures available of this coin too, but the obverse depicts the crowned bust of the King facing left. The legend around reads “George V King Emperor”; tucked in four points of the star are a) a lotus flower at top, “19” to left and “19” to right and “INDIA” below. The reverse of the coin is blank.[3]

Unlike other British monarchs, King George V had a very distinct personality. He was a hardworking person. King George V was greatly admired by his people and he had immense devotion towards Great Britain. Some historians have called him a ‘dull’ man, but it was only because his ordinary lifestyle did not match up to a King’s status. In 1932 he started the tradition of the Royal Christmas broadcast which has continued ever since. He is also someone who revived the Philately as a hobby.

He died on January 20, 1936. He was succeeded by Edward VIII, who abdicated the throne in just 11 months. King George V’s second son Albert ascended to the throne as King George VI.