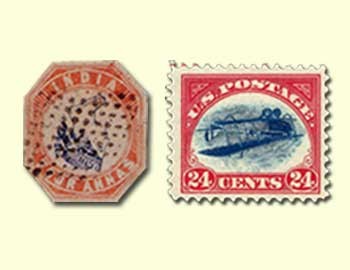 To err is human. And the Almighty says you would be punished for committing every mistake. But the world of Philately overrides this rule. Error stamps have been issued all over the world but inverted stamps hold a special place in every stamp collector’s heart.  Let’s take a look at some of the most famous inverted stamps of the world.

One of The Most Famous Inverted Stamps: The Inverted Jenny

Back in 1910s, the United States Post Office was fiddling with the idea of introducing air mail. As an extension of this intension, they issued a stamp in 1912-13 featuring an aeroplane with a tagline “aeroplane carrying mail”. The air mail finally took flight on 15th May, 1918 between Washington, D.C., Philadelphia, and New York City. The normal postage service could be opted for 3 cents while a 24 cent stamp was required to avail the special air mail service. The stamp depicted the biplane named Curtiss Jenny JN-4HM which was specially modified for this service. Only six such aircrafts existed.

There was a great urgency in producing these stamps as the engraving began on 4th May and printing was initiated on 10th May in sheets of 100 unlike the usual standard of 400 numbers. The stamp was printed in two colours and hence had to be printed on a flat-bed printing press twice. An error in the process of printing stamps issued in 1869 and 1901 resulted in the inverted pennies. Out of three misprinted sheets, two were destroyed and one was fell in the hands of an unknown person. Stamp collectors all over the world crave to have this piece of magic with them. The frames were printed first and the planes were then printed over them upside down. In some examples, the plane is off centre to overlap the frames.

The inverted jenny is one of the most coveted stamps in the world of Philately. Over the years this stamp has been sold at several auctions and fetched handsome returns. On May 31st 2016, a rare inverted jenny stamp was sold for $1,175,000.

In more recent news, a gentleman named Keenil O’Neil from Ireland found an Inverted Jenny that was missing for more than six decades. He received a bunch of gifts from his grandfather, two months before he passed away in which one of them was the beautiful red and blue stamp. It was supposedly from the block of four known to collectors as the McCoy block, which was stolen from its exhibition frame in 1955 during the American Philatelic Society convention in Norfolk, Va. Young Keelin, admitted that he was the was the finder of the stamp while attending World Stamp Show-NY 2016 in New York City. The American Philatelic Research Library took ownership of the stamp on 2nd June. It is the 76th stamp of the total 100 stamps that were printed and the 4th one of the famous block of four that is yet to be recovered. If you are a fan of error stamps then you might already know this Sachin Tendulkar of inverted stamps.

These one-dollar error stamps were issued by the United States Postal Service between 1975 and 1981. First issued on 2nd July, 1979, the lamp candle holder, candle outline and text are inverted, keeping the flame in consideration. Only 95 such stamps exist in the world. As these $1 stamps were printed in sheets of 400, three additional panes of 100 stamps certainly existed at one time, but no trace of these has so far been discovered.

Even before the discovery of these stamps, they were already in circulation at the McLean, Virginia post. Five of them were sold with the portion of the selvage featuring the unattached plate number. An employee of the CIA purchased a pane of these stamps and only several days later the error was discovered. He along with nine other colleagues acquired the error stamps for themselves. Eventually each of them kept a single inverted stamp and sold the rest for $25,000. The sale was kept a secret until it was leaked out publically by the media. However the CIA asked the nine employees return their inverts to the agency and threatened to terminate them in case they don’t. Four returned their stamps, four refused, while the ninth claimed that he had lost his stamp. A block of four stamps was sold in 2004 for $60,000.

This one would also count in as one of the most famous error stamps or inverted stamps of the world.

In 1901, the United States Post Office issued a series of six commemorative stamps to celebrate the Pan-American Exposition held in Buffalo. Each of these stamps featured a black and white image of some means of rapid transportation with an ornate coloured frame around it.

Due to the two colour printing, 1 cent, 2 cents and 4 cents stamps were printed with inverted vignette. Out of these, the 1 cent and 2 cent inverts reached post offices but the 4 cent invert was printed by mistake and never went for sale. After the discovery of the 1¢ and 2¢ inverts, third Assistant Postmaster, Edwin C. Madden wanted to find out about additional errors. He instructed the Bureau of Engraving and Printing to send any of the inverted stamps to him. Since none were found, the Bureau produced four sheets of them from the 4 cent plates and sent 400 copies with the word “specimen” handstamped in purple ink on about half of the stamps. Between 1901 and 1904 Madden distributed 172 four cent inverts as gifts to friends and relatives. He was not charged of any wrongdoing as there was no money involved. A pane of 100 was taken by the Government Collection of American Stamps in the Washington National Museum. 97 of these stamps were traded and exchanged for examples of rare U. S. issues missing from the museum’s collection.

One single stamp of each value was sold at auction in April 2009 for a total cost of $199,000 and a block of four of each invert value realised $1,146,000. Wished you had one these pricy error stamps or inverted stamps in your collection?

Experts state that only 30 of these error $2 blue and black stamps exist in the world today. The black central Vignette of the gateway is inverted. In 1915, the first Peking printing produced the error stamp being offered, and a second Peking printing in 1923. The invert is listed in the 2016 Scott Classic Specialized Catalogue of Stamps and Covers 1840-1940 with a value of $250,000. Cherrystone is offering the stamp with an estimated net realization of $100,000.

One of the world’s first multi-coloured stamps, the 4 Anna stamps in red and blue were first printed in 1854 with an invert error showing the head “upside down.” The earlier multicoloured stamp, the Basel Dove stamp was issued nine years before this one. They were lithographed using the two basic colours by the Survey Office in Calcutta. The paper was first imprinted with the red frames and left to dry overnight. The blue heads were overprinted on them the next day. The First Printing began on October 13, 1854 with 12 stamps per sheet and a total of 206,040 stamps. At least six sheets were fed upside down into the machine. The error was discovered during a Philatelic Society of London’s 1874 meeting. After a confusion whether the error came from the first or the second printing, the error was finally reported in January, 1912 by Mr. Séfi in the West End Philatelist. A total of 28 known examples exist today, all of which were used as postage. Two or three are cut square, 25 are in an octagonal shape and one was exhibited in the World Philatelic Exhibition in Washington in 2006. In 2013, a fine example of this rare invert was auctioned in London on 23rd January.

This error stamp or inverted stamp will go down as the pride of India!

Now you know that to err could not only be human but can be sometimes lucky too!

To know more about stamps of India and stamps of the world, visit our online museum Mintage World.

View all posts by Team Mintage World →
One thought on “Inverted Stamps: Some Errors In Life Can Bring In Luck”