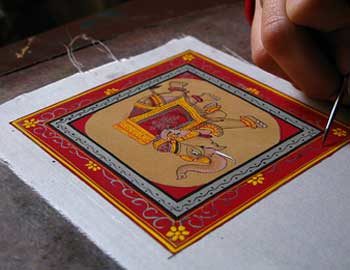 India has been a riot of colours with each region developing a culturally unique style of paintings! Miniature Paintings undoubtedly are the best of all. Starting from merely being the illustrations for religious texts, Miniature Paintings have stolen many hearts with its varied topics of depiction. Originally the sacred texts were written on long narrow strips of palm leaves bound together in form of a bundle. Due to the size of the palm leaf that was usually one foot long and less than 3 inches wide, the area available for painting the illustrations was limited. The illustrations, therefore, are miniature in size and hence came to be known as “Miniature Painting”. These manuscripts were meant to be held in one’s hands and viewed from a close distance.

Around 14th Century C.E. Paper began to provide an alternative to palm leaves as a writing support for the manuscript in India. For some time during the initial transition from palm leaves to paper, the format of the text and illustration remained the same as that of palm leaf manuscripts. And later during the Sultanate period, the dimensions of the paper folio was increased to approximately 9 inches long and 6 inches wide. There were certain changes in the style and subject matter too.

Various styles of miniature paintings developed in different regions of India mainly under the patronage of the local rulers, nobleman, and religious institutions. Styles such as Western Indian, Mewar, Bundi, Kota, Malwa, Bikaner, Kishangarh, Thikana, Deccani, Pahari, etc evolved and contributed to the already colourful and illustrious culture of India. Most of these painting styles derive their names from the region or place where they developed, except for a few such as the Mughal and Sultanate styles, which get their names from their patron dynasties. Every local style has its own regional characteristic and some regions still carry on the rich tradition of miniature painting in parts of India.

India Post in 1973 has commemorated some styles of Indian miniature paintings on stamps. Let’s have a look at these beauties. 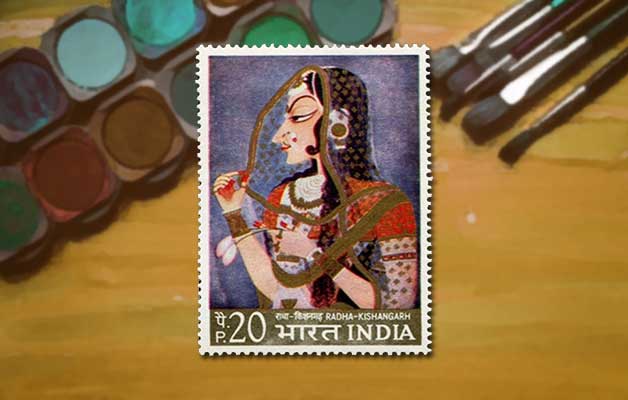 Kishangarh’s Radha: This “Mona Lisa of India” is an excellent example of Kishangarh School of Rajasthani Miniatures. Painted by a famous artist called Nihal Chand, the lady depicted here as “Radha”, was said to be a singer and poet in the court of Savant Singh by the name ‘Bhani-Thani’ (possibly pseudo). Interestingly Bani-Thani featured as the female character and Raja Savant Singh as the male character in many of Nihal Chand’s paintings. This 20 Paisa commemorative honours this beautiful art on stamps!

Rajput painting, also called Rajasthani painting, evolved and flourished in the royal courts of Rajputana in India. Rajput paintings depict a number of themes, events of epics like the Ramayana. In the late 16th century, Rajput art schools began to develop distinctive styles, combining indigenous as well as foreign influences such as Persian, Mughal, Chinese and European. The Rajasthani painting consists of four principal schools that have within them several artistic styles and sub-styles that can be traced to the various princely states that patronised these artists. 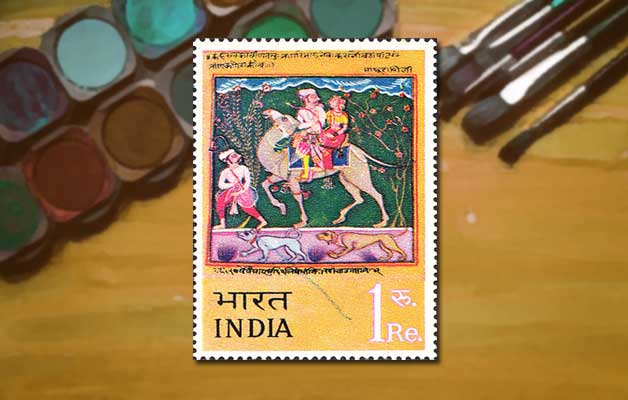 Musical ‘Maru Ragini’: Famous for their varied themes ranging from religious depiction to capturing various moods of nature and humans, “Raga Mala” style of Indian miniatures are the most famous! Colourfully personifying each “Raga” or a musical mode, these miniatures are a perfect fusion of art and classical music.  This Re. 1 stamp depicts the famous musical folklore of ‘Dhola-Maru’ meeting after a long time by the grace of their faithful camel. Set against bold primary colours this painting is painted by artist Nasir-Ud-Din.

Ragamala Paintings are a series of illustrative paintings from medieval India based on Ragamala or the “Garland of Ragas”, depicting various Indian musical modes called Ragas. They stand as a classic example of the amalgamation of art, poetry and classical music in medieval India. Ragamala paintings were created in most schools of Indian painting, starting in the 16th and 17th centuries, and are today named accordingly as Pahari Ragamala, Rajasthan or Rajput Ragamala, Deccan Ragamala, and Mughal Ragamala. The above one is from Rajasthan’s Mewar style of Miniature paintings. 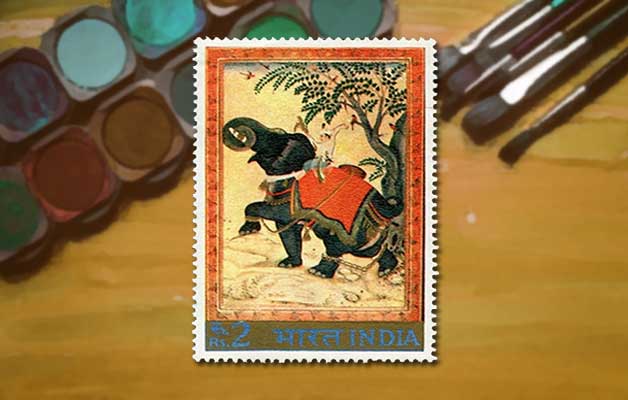 The second Mughal, Humāyun, was forced into Persian exile, but when he returned to India in 1555 he brought two Persian masters, Mir Sayyid Ali and Abd al-Samad, to establish a Mughal atelier, and that’s when the story of Mughal miniatures starts in India. Mughal paintings later also spread to other Indian courts, both Muslim and Hindu and later were incorporated into the Sikh courts too. The mingling of foreign Persian and indigenous Indian elements gave this painting style a fresh perspective.

Majestic animal Tamed: Being a true admirer of art, Jahangir’s reign saw an impetus in Mughal miniature painting styles. Finer brushstrokes, pastel colours, portraitures and detailing of nature and animals characterised the miniatures of this period. Depicted on this Rs. 2 commemorative stamp is a beautiful painting of artist Zain-Al-Abidin. It features a chained ceremonial elephant with a red-saddle cloth and a Mahut (rider) or King holding an Ankush (goad). The in-depth featuring of birds and tree leaves are a proof of the Jahangir period of Mughal Miniatures. 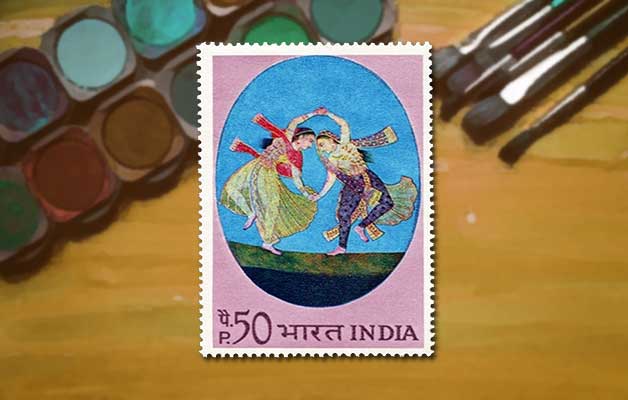 Dancing Duets: The art of Miniature paintings developed mainly because of the royal and the religious patronages. Under the Mughals, a beautiful blend of Persian craftsmanship with Indian ethnicity infused some realism into the miniatures. However, Aurangzeb being a devout Islamic did not patronize art and the Mughal school of miniatures saw a set back with religious Islamic quotes and calligraphy finding the foreground. This painting on 50 Paisa stamp, depicting a dancing couple is one such uncommon Mughal Miniatures from Aurangzeb’s period. Lack of royal patronage made the Mughal artists migrate to other courts and through this migration, the art of Mughal miniatures influenced the other styles.

Miniature paintings are not only about colours, lines and styles. The artists recorded important events and details of daily life, so when you look at these paintings you will see scenes of court life and activities of rulers and noblemen, hunting scene, battles and wonderful study of birds, animals, flora and fauna, portraits of the emperor and his courtiers. These paintings record the minute details that the artists observed around them. So by just looking at a miniature painting, you can tell the class or ranking of the subject or by the design of the garments, its print you can tell the region where the painting came from etc. Hence paintings are an important source to know the history, socio-cultural and political life of a particular region or period. You can also see various architectural details and also various religious ideologies.

The art of miniature paintings which brought name and fame for the state and the country from all over the world is dying due to the apathetic attitude of the government. It is still not too late to start a school of paintings employing local artists, who have the technical know-how, skills, techniques, indigenous colours and handmade papers.