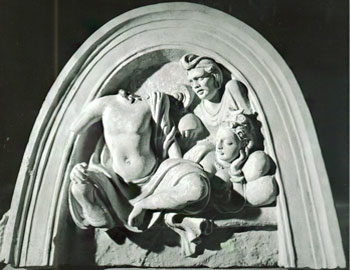 Afghanistan, which stands at a crossroad of the ancient civilizations in the East and West, has kept a unique treasure in different parts of its land. In this blog, we will explore the Cultural Heritage of Afghanistan which has been destroyed or is at a risk of ruin from armed conflict.

Hundreds of Archaeological sites, monuments and unique cultural and historical objects relating to different periods, such as Greco Bactrian, Kushan, Sassanid-Ephtalits, Hindu Shahis, and Islamic, were unearthed in this country. A large portion of these objects was kept in the Kabul National Museum and numbers of them were preserved in the depot of the Archaeological Institute.

However, from 1978 to 1992 the cooperative relations between the scientific and cultural organizations of the western countries and Afghanistan in the field of archaeological activities were cut off. Later the central government became so weak that it was not in a position to protect public and state properties. From1992-1994, not only were the governmental departments plundered, but more than half of Kabul was destroyed and changed into a traumatized city. More than 60,000 innocent people were oppressed and killed. Furthermore, over 70% of the Kabul National Museum and100% of the objects was stolen and looted.

Illegal excavations and extensive clandestine digging started at most historical sites and thousands of valuable objects were transported. On the basis of 1980 statistics, there were then more 2,800 archaeological sites and historical monuments which later became a good source for looters.

Here are the lists of oldest Postage Stamps which depict the Cultural Heritage of Afghanistan which have been destroyed or at a risk of destruction. 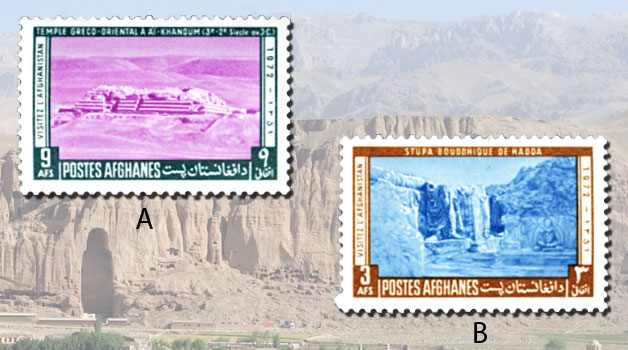 Previous scholars have argued that Ai Khanoum was founded in the late 4th century BC, following the conquests of Alexander the Great. Recent analysis now strongly suggests that the city was founded in c. 280 BC by the Seleucid king Antiochus I. The city is located in Takhar Province, northern Afghanistan, at the confluence of the Oxus river (today’s Amu Darya) and the Kokcha river, and at the doorstep of the Indian subcontinent. Ai-Khanoum was one of the focal points of Hellenism in the East for nearly two centuries until its annihilation by nomadic invaders around 145 BC about the time of the death of Eucratides, a Greco-Bactrian King.

Ai-Khanoum also yielded unique Greco-Bactrian coins of Agathocles, consisting of six Indian-standard silver drachms depicting Hindu deities. These coins display early Avatars of Vishnu: Balarama-Samkarshana and Vasudeva-Krishna, and are thought to correspond to the first Greco-Bactrian attempts at creating an Indian-standard coinage as they invaded the northern parts of India.

French and Russian archaeologists worked on the site between 1964 and 1978 but the Soviet invasion of Afghanistan forced the excavations to be abandoned. Tragically, Ai-Khanoum was heavily looted and much of it was destroyed during the ensuing conflict.

The three Afghanis stamp (B) from the same issue depicts another important cultural heritage of Afghanistan, Buddhist Stupa at Hadda, close to the Khyber Pass in Kandahar province. Over 20,000 Buddhist sculptures fusing Buddhist and Hellenic artistic traditions from the second or first century BC were excavated at the site.

Much of this site was destroyed in the Afghan civil wars between 1989 and 1986, which followed the Soviet withdrawal from Afghanistan. 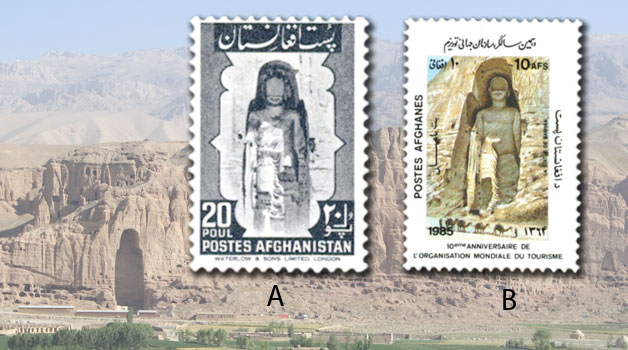 March 21, 1951, 20 Poul (A) and September 27, 1985, 10 Afghani (B) both depicts the largest of the Bamiyan Buddhas, situated in the Hazarajat region of central Afghanistan. Part of the historic Silk Road trade route linking India and China, Bamiyan was an important Buddhist holy site. In 629AD, Chinese traveller Xuanzang described Bamiyan as a bustling centre with tens of thousands of monks.

The name Bamiyan derives from the ancient Dari (or Dari Persian) word Bamikan, the “middle roof” and is first mentioned in the 5th century A.D. as the kingdom of Fan-Yang (Bamiyan) in Pei-che Chinese texts. Bamiyan was moulded by man to become a resting place for travellers, a meditation heaven for Buddhist monks, a reputable artistic school, and finally, one of the world marvels.

Known collectively as the Bamiyan Buddhas, the two monumental sculptures have amazed both Buddhist and non-Buddhist visitors for more than a thousand years. The smallest Sakyamuni Buddha measured 35 m and the largest 55 m tall was once renowned as the tallest Buddhist statue in the world. These statues represented a classic blending of Greek and Buddhist art. 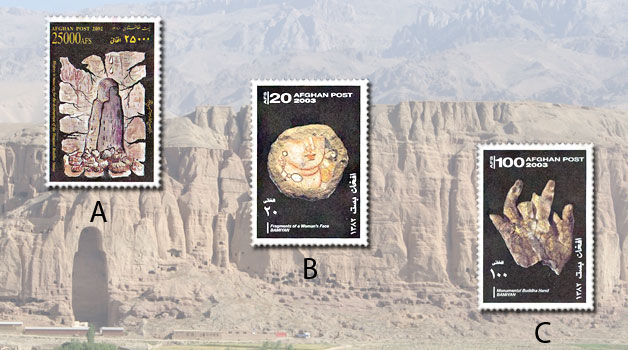 But In 2001, the extremist branch of the Taliban destroyed the two colossal Bamiyan Buddha statues. The following year UNESCO issued a 25,000-Afghanis Bamiyan postage stamp(A), abstractly illustrating one of the empty Buddha niches buried in the statue’s fallen rubble.

In 2003, the Afghan government issued a series of postage stamps called ‘Heritage of Afghanistan’, in which four postage stamps depicting fragmented Buddhist artefacts. Two of the stamps illustrated broken fragments from a Bamiyan fresco and statue.

20-Afghanis stamp (B) depicts Fragment’s of a Woman’s Face and 100-Afghanis stamp (C) depicts Monumental Buddha Hand. The fragmentation of the Buddhist iconography presented in the postage stamps commemorated, both abstractly and literally, the country’s colossal cultural heritage loss at the hands of the Taliban.

The destruction and damage sustained by many important heritage sites throughout these regions are sobering. These endangered sites are among the greatest cultural treasures in all of Asia. It is a sobering thought that many of the cultural heritage sites depicted on postage stamps from these nations might not be with us for much longer.