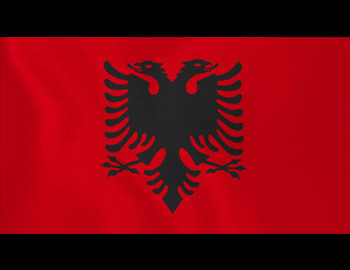 Situated on the eastern shoreline of the vast Adriatic Sea, Albania is a land of eagles. Its area is slightly larger than Manipur state and consists of mountainous highlands and coastal lowlands. The natives call themselves Shqipetar (Son of Eagle) and are recognized by ethnologists as pre-Balkhan people who were perhaps the decedents of the Pelasgians and Illyrians. Their coinage, just like its scenic beauty is diverse and elegant. So let’s dive right through and trace the journey on how the coins of Albania took its form.

Until 1912, Albania was a part of the Ottoman Empire, and its monetary system consisted of the Ottoman lira which was divisible into non-decimal units such as altilik, beshlik, yuzluk and the like. A monetary reform in 1881 greatly simplified the system leaving the piaster divisible by 40 para. From its independence in 1912 until 1925, there were no coins of Albania or the country did not have an independent monetary system of its own. It relied on French francs, Italian liras, and Greek drachms – monies of the Latin Monetary Union – in addition to Austrian kronen.

In 1925, Albania introduced the franga, a derivative of the franc. The franga, formally known as the franga ari, was divisible into 100 qindarka, a term derived from the Albanian word njeqind, meaning ‘one hundred’. The currency monetary unit, the lek, is derived from the abbreviation of the Albanian spelling of Alexander the Great; it replaced the franga as the standard monetary unit in 1946 at an exchange of five lek for one franga. Although the English singular and plural forms for the lek are the same, the spelling of the Albanian-language plural for lek is either leke or leku, depending on the number it is associated with.

The first lek coins of Albania were issued in 1926 under President Ahmed Zogu who in 1928 proclaimed himself King Zog I. Albanian gold coins came in denominations of 10, 20, 50 and 100 franga ari and portrayed the head of King Zog on the obverse and double-headed imperial eagle, a biga or the king’s coat of arms on the reverse. Albanian silver coins were issued in 1, 2 and 5 franga ari and illustrated a helmeted female goddess, Bust of King Zog or a standing eagle with open wings on the obverse. Prow of an ancient ship, king’s coat of arms or a man with a plow can be seen on its reverse side. Bronze coins were introduced in 5 and 10 quindar leku together with nickel in 1⁄4, 1⁄2 and 1 lek. These coins depicted distinct neoclassical motifs which are said to have been influenced by the Italian king Victor Emmanuel III who was an avid coin collector. These issues depict the mint marks “R”, “V” or “L”, indicating Rome, Vienna or London.

After the invasion of Italy in 1939, a new series of coins of Albania in denominations 0.20, 0.50, and 1 lek in stainless steel, and silver 2, 5, and 10 lek were initiated. In 1940, the production of aluminum-bronze 0.05 and 0.10 lek was stopped. The coins depicted the portrait of Italian King Victor Emmanuel III on the obverse and the Albanian eagle with fasces on the reverse. In 1947, the communist party rooted their stronghold and withdrew the older coins from circulation. A new coinage of zinc 1⁄2, 1, 2 and 5 leke was introduced which portrayed the socialist national crest. In 1957, this coinage was again minted and used until the currency reform of 1965.

The second lek series began with the aluminum Albania coins (dated 1964) of 5, 10, 20 and 50 quindar and 1 lek which featured the socialist state emblem. To commemorate the liberation from fascism, a new series of aluminum coins were released in the same denominations. Designs of the three smallest denominations remained the same but they featured dates ‘1944-1969’ on the obverse. Patriotic and military images were used on the 50 qindarka and lek coins. In 1988, aluminum coins were revamped for the third time and issued. However, the 50 qindarka and 1 lek coins were approximately of the same weight, size, and appearance, making it difficult to identify. Hence aluminum-bronze 1 lek coins with legend ‘Republika Popullore Socialiste e Shqiperise’ were introduced. A copper-nickel 2 leke coin was also released in 1989. These newly introduced coins remained in circulation during and shortly after 1991 revolution.

The third lek series was introduced in 1995 and 1996 in denominations of 1, 5, 10, 20 and 50 leke, with 100 leke bimetallic coins added in 2000. These coins portray a pelican, eagle from the flag of Albania, Berat Castle, Liburni ship, a portrait of Illyrian King Gentius and bust of Queen Teuta respectively. In 2001, commemorative coins were also initialized under the theme of Albania’s integration into the EU.

So now you know the outline of the coins of Albania. Do stay tuned on the Coins of the World series. Lots of interesting facts coming up! By the way, which country would like to know about next?