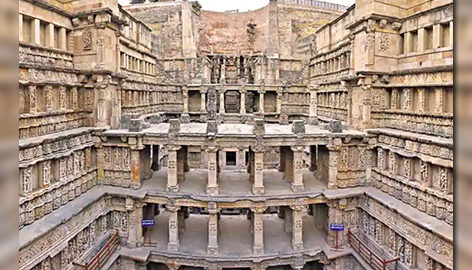 India has a magnificent history. All of it is beautifully reflected in the architecture and monuments that the country is adorned with. Some of them are as old as a thousand long years.  Historical Monuments printed on Indian Currency will give you an overview of the country’s illustrious past. Let’s take a tour then! After the demonetization of the Rs 500 and Rs 1000 currency notes on November 8, 2016, we’ve seen 7 new currency notes from the Reserve Bank of India (RBI).  The new Indian banknotes with value 100, 200 and 500 rupees depict three of the most beautiful Historical Monuments. 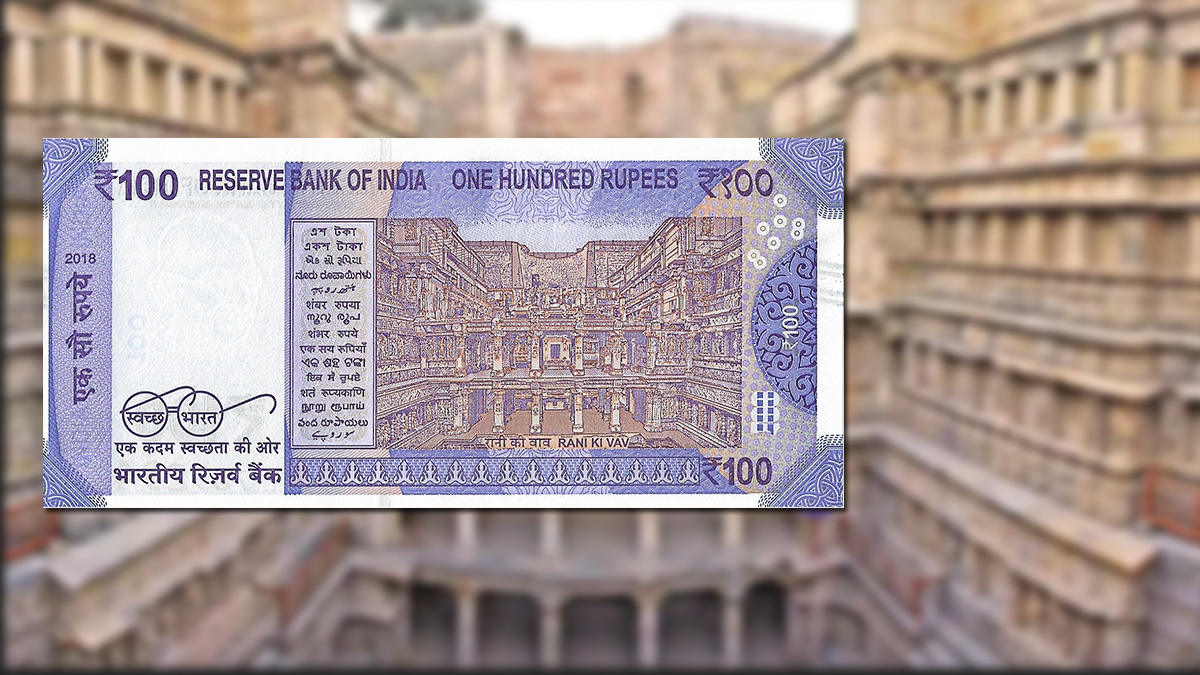 Rani Ki Vav or ‘Queen’s Stepwell’ is a distinctive form of water storage system located in the small town of Gujarat called Patan, on the banks of River Saraswati. Being one of the prominent attractions of Gujarat, Rani ki Vav is visited by a lot of tourists. The architecture and historical relevance of this beautiful stepwell are commendable.

This astonishing structure is built in the complex Maru-Gurjara architectural style. The unique stepwell is constructed by Chaulukya dynasty Queen Udayamati in memory of her late husband, King Bhima I. It is 64 m long, 20 m wide & 27 m deep and is known for its stepped corridor and pillared multi-storey pavilions. It has a 30-kilometre tunnel, currently blocked by stones and mud, which is connected to the town of Sidhpur near Patan.

There are more than 800 elaborate sculptures being carved on the inner walls of the stepwell. The central theme is the Dasavataras (the 10 incarnations of Lord Vishnu). The other sculptures are of sages, apsaras (celestial dancers) and Brahmins. Some sculptures show Nagkanya, Yogini beautiful women and fairies, showcasing 16 different styles of make-up (Solah-Shringar).

A masterpiece of architecture, Rani ki vav is the only stepwell declared as a UNESCO World Heritage site. It is also featured on the Lavender coloured 100 Rupees Banknote issued by Reserve Bank of India. 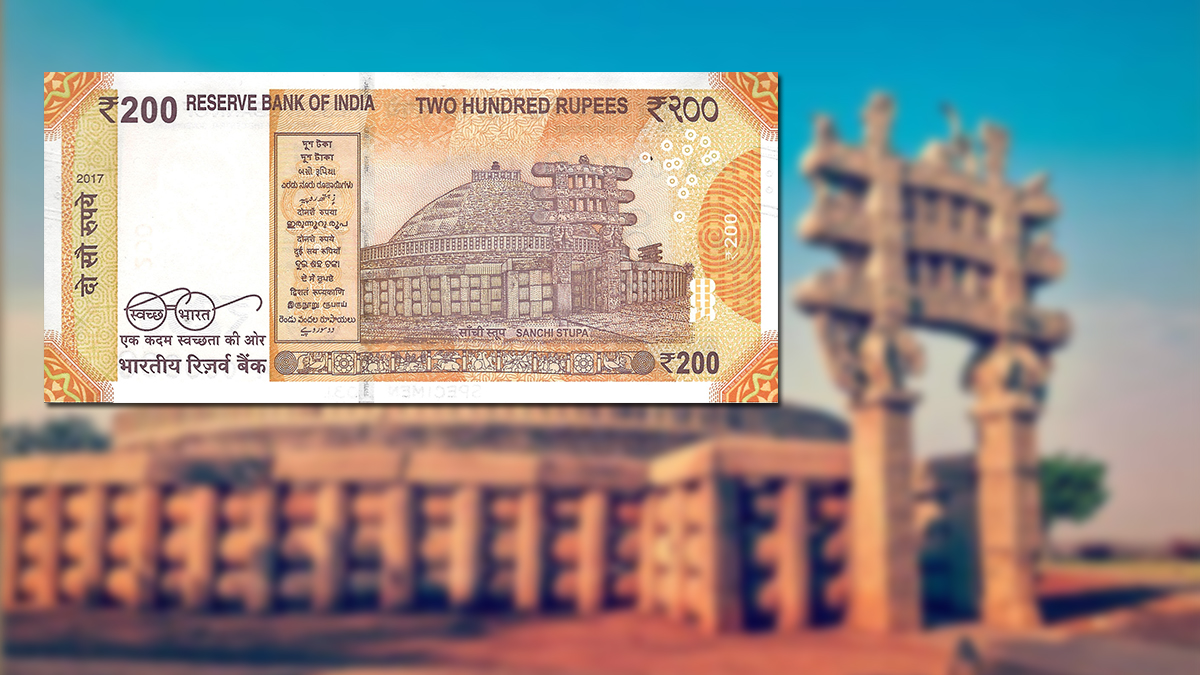 For the first time in history, India gets a banknote of Rs.200!

This new denomination illustrates on its reverse a famous Buddhist monument, the Sanchi Stupa, depicting our country’s diverse cultural heritage. Based in against a Bright Yellow colour, this note has other designs and geometric patterns merging with the overall colour scheme.

The moment we hear Sanchi Stupa, our mind goes back to 300 BCE to Ashokan Period. The Great Stupa at Sanchi is one of the most important Buddhist monuments reflecting the gems of Buddhist art and architecture. This Stupa is located in Sanchi Town, Madhya Pradesh, India. It is the oldest stone structure in India and was built during the Mauryan period.

Originally commissioned in the third century BCE by Emperor Ashok, this huge hemispherical dome has a height of 12.2816.46 m (54.0 ft) and consists of a central chamber where the relics of Lord Buddha are placed. It was further expanded by the Shunga rulers.

When we are talking about Historical Monuments printed on Indian Currency, this particular Buddhist monument has a special significance. 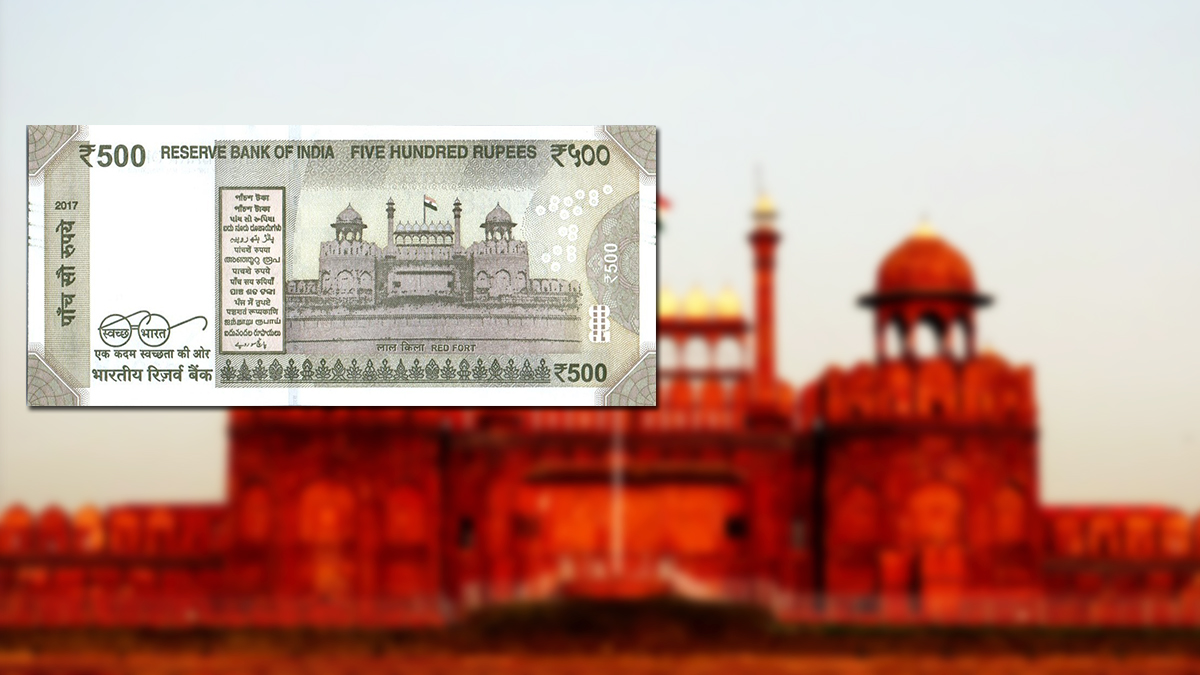 The Red Fort was built as the palace fort of Shahjahanabad: the new capital of the 5th Mughal Emperor of India, Shahjahan. It gets its name from its massive enclosing walls of red sandstone.

On the auspicious day of Muharram, the construction of Red Fort began. Supervised by the emperor Shahjahan himself, the foundation of the fort was laid on 13th May 1638. Built-up by red sandstone, the name Lal – Quila speaks for itself.

In 1638, Shahjahan transferred his capital from Agra to Delhi and laid the foundations of Shahjahanabad, the seventh city of Delhi. Enclosed by the stone walls and gates, the royal residence – Lal Quila or Red Fort stands impenetrably by the North Frontier of the City.

The imperial apartments consist of a row of pavilions, connected by a water channel. The fort complex is considered to represent the zenith of Mughal creativity under Shah Jahan and although the palace was planned according to Islamic prototypes, each pavilion contains architectural elements typical of Mughal buildings that reflect a fusion of different architectural tradition.

The Red Fort not only is a fine specimen of architecture, but also a sturdy witness of the history of India. Being the capital place of the Mughal Empire, the Red fort silently speaks about the rise and fall of the Empire, celebrations of festivals, and periods of crisis and declarations of the wars. The fort also witnessed the zenith of the Mughal Empire as well as the domination by the Maratha Empire and finally the captivity by the British. The Fort still stands valiantly and proudly sees the hoisting of “Tiranga” on 15th of August every year since 1947.

This Heritage Monument of utmost importance appears on the new INR 500 notes! It is an incredible specimen in Historical Monuments printed on Indian Currency series.

India is one of the most beautiful countries in the world and is best known for its colourful culture and fascinating heritage. These beautiful architectural wonders truly represent the respective nation’s cultures and traditions. This new Banknote has a special significance when we mention about Historical Monuments printed on Indian Currency. Please wait for our next Blog to know more about other charming Indian monuments.

Till then keep collecting…