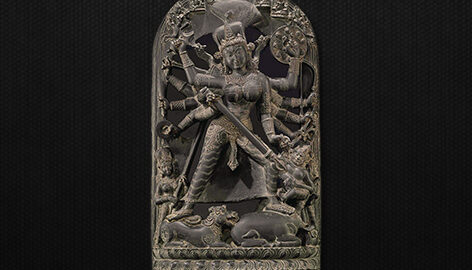 “Adi Shakti, Namo Namah; Sarab Shakti, Namo Namah; Prithum Bhagvati, Namo Namah; Kundalini Mata Shakti; Mata Shakti, Namo Namah. “ All alone supreme energy was roaming in the darkness wising to a share her loneliness. Its desire leads to the creation of the universe. This Supreme Being created living and nonliving things which becomes the pinnacle of continues creation. She made the flora, she created the fauna and created mankind. We call her Maya, Adi-Shakti, Parvati or Goddess Durga, this power has many names, she is the power behind the continuous creation. Vedas calls her the energy that resides in the Kundalini (belly button) of human’s, the warmth in the living being breath, the speed of the planets and also the energy resides in the Lord Shiva Trishul and Lord Vishnu Sudarshan. This Supreme Being is worshipped in form of mother goddess in ancient civilization around the world. Many Posts commemorate goddess Durga on stamps to celebrate this ancient and living tradition of the mother goddess.

In India, the cult of the mother goddess is active since Indus valley civilization or even before that. The triangle shape fertility stone found in India can be traced back to the Stone Age. The active worship of mother goddess is evident in the Harappan culture from the early stage. Later, the earliest temples were also dedicated to mother goddess-like Sapta Matrikas and Chausath Yoginis temples. India has an active cult and long-standing tradition of Goddess worship. Later, the Devi Mahatymaya and Devibhagawati Purnana also throw light on the growing Shakti cult worship in the subcontinent.

Today India, Nepal, Bhutan and other Southeast Asian countries have their tradition and culture influenced by the Shakti cult. There are different festival celebrated the different form of goddess Adi-shakti. Western India celebrated Navaratri and eastern Durga Ashtami

The first stamp depicts the goddess Durga face. It depicts the grand festival of Durga Ashtami celebrated in West Bengal.  The stamp was part of series commemorating the Goddess festival celebrated in eastern India. India Post issued this stamp in 2008

The Third image depicts the terracotta sculpture of Goddess Durga on stamps in her Mahishasur Mardini form. This stamp was issued by India Post to commemorate the State Museum in 1989. 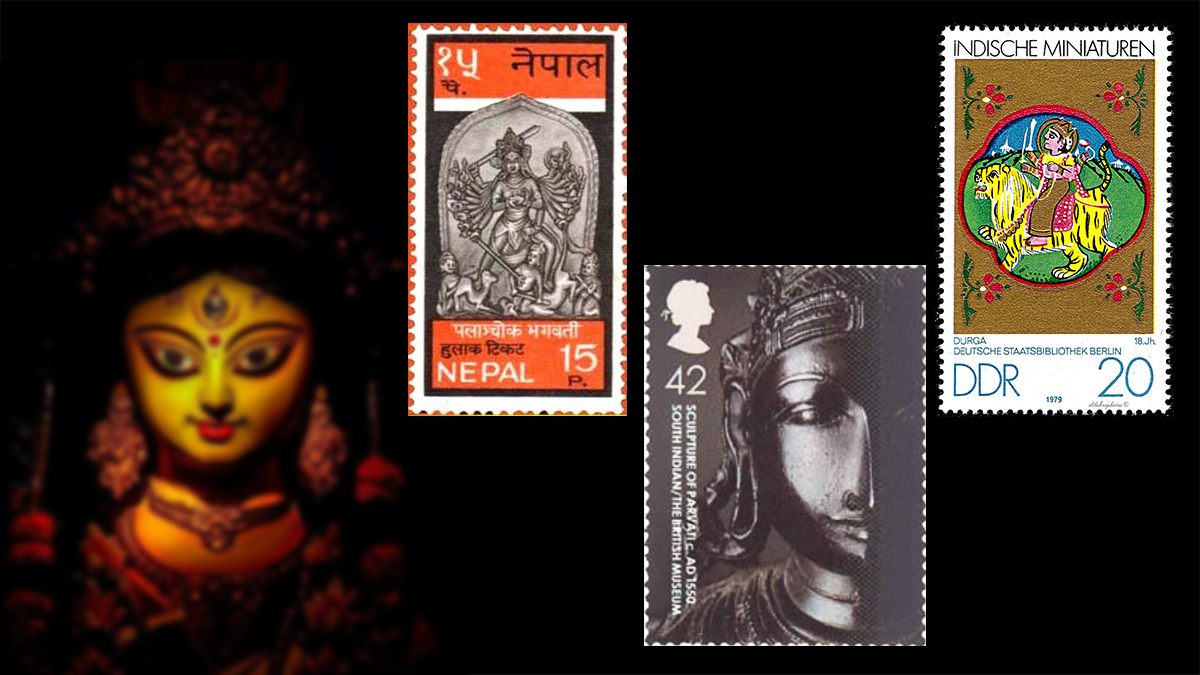 All over the world different civilization has their theory of creation and own form of the mother goddess. Most the most prominent cult is found in India but many countries have commemorated goddess Durga on stamps.

The stamp is issued by the Nepal Post, the country of Nepal has two Shaktipeeth out of the 51 Peeths. Nepal is highly influenced by these Peetha, the stamp depicts goddess Bhagwati in her ferocious form.

The second stamp is issued by the Royal Mail, they depict the face of the Bronze sculpture of Goddess Parvati, consort of Lord Shiva.  This sculpture belongs to the Chola period. It is one of the phenomenal postage tickets in goddess Durga on stamps series.

The third stamp issued by Germany in 1979. It depicts the miniature painting of 17th century depicting Goddess Durga on stamps.

Goddess Durga or Adi-shakti is the same divine power with a different name. The energy form of the divine being is called Adi-shakti and humanoid form is called Goddess Durga. When she created the universe with Adi-Purusha she is called Maya. When she ends the universe with Lord Shiva, she is called Kalaratri. She is also called the energy that transforms Shava to Shiva. It is quite hard to explain her being because she has so many forms but each form of her depicts every role played by the woman in her life. Adi-shakti represents creation. Without her everything is Nirguna(without essence) and Nirakar(without shape).