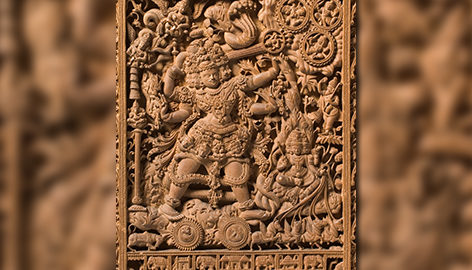 Deities are worshipped in various forms from time immemorial.  Beliefs and reverence for supernatural powers have driven humans to worship various forms. They may be natural elements personified, saints and divine personalities considered next to god or the God Himself.  These deities are found depicted on Indus Valley Seals, on walls of ancient ruins and at places of worship.  After the advent of coins, deities were depicted on coins. Different groups of people believe different things about God and thus have formed their own ideas. Each religion specified a fixed role for the various gods that adorned their pantheon. The royalties of those times had an array of gods mentioned in their inscriptions, depicted in their art like the paintings, sculptures and more importantly on their coinage! These gods and goddesses which feature on the coins are a very important link and evidence of the religious beliefs of those particular kings and the change in the patterns of the deities appearing on the coins also give an insight into the acceptance and merger of different religions and an attempt of the kings to blend in with the locals of the newly acquired foreign lands. Deities on Tripura Coins give insightful information on the beliefs, society and religious practices that existed during the time.

Dangling in the Bay of Bengal, the State of Tripura is the third smallest state of India. Though, small in size, the state has a colossal past. The state of Tripura is tucked in mythology, and a history of over 2,500 years and 186 kings. The diversity of cultural streams and faiths, ancient temples, an epic history, spellbinding archaeology, handicrafts, traditional arts and music, bountiful biodiversity, and flushing meadows are but a few of the experiences of Tripura. The testimonies of the esteemed past of the State of Tripura are in numbers. The Coinage of the Kingdom of Tripura possesses those stories which are beyond words and the depiction of Deities on Tripura Coins tells the influence of the religious thoughts on the mythology prevailed in the region.

The state of Tripura an erstwhile was one of a strong regional power in the history of entire North East India. Tripura has its own Glorious history and uniquely diverse culture. Scientists and researchers believed that Kirat Race and Borok Race came from different parts north and settled down in the vast region of present Tripura. By its own capability, the Kingdom of Tripura was able to extend over the region from east Bengal to Burma, and its capital was Ratna Pur. According to the researchers and historians, the starting of coin currencies of the Tripura Kingdom began approximately by 15th century AD. The time witnessed the repeated Muslim invasions in India. The state of Tripura succeeded in maintaining its political identity against the Muslim Invasions. Depiction of Deities on Tripura Coins was possibly the way to keep the religion intact.

The most unique of the Depiction of Deities on Tripura Coins is the Aradhanarishvara. The royal lineages of Manikya dynasty were the follower of Shaivite beliefs and it was beautifully illustrated on their coinage. The concept of Ardhanarishvara goes beyond gender equality. It is about accepting the dual form of human nature called ‘masculine’ and ‘feminine’ sides. The masculine side represents the physical strength, calm state of mind and determination but the feminine side represents development, love, and protection. This concept can also be adopted by a society or an individual because this Ardha Nara-Nari represents the rule of creation. 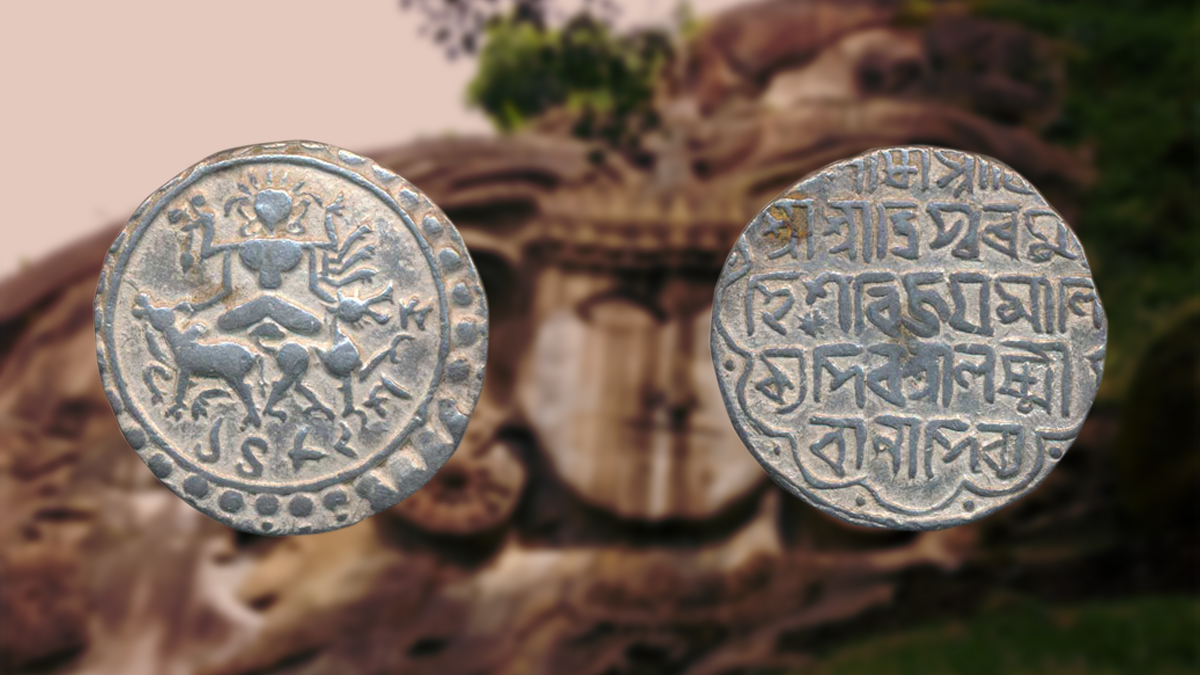 This form of Ardhanarishvara is also about a new start and development. Hence, this silver tanka was minted to commemorates a ritual bath that King Vijay Manikya I took in River Lakhi (Brahmaputra’s tributary) which was undertaken during a raid into Muslim Territory. This Tanka of Tripura depicts the Ardhanarishvara in a seated form with a bull in left and lion on right and Saka date in exergue within a designed border. Its reverse side depicted legend in Bengali “Lakshya Snayi Sri Sri Tripura Mahesh Vijay Manikya Deva Sri Lakshmi Rani Devyah” in five lines across the flan within the twelve arched borders.

Apart from Shiva, Tripura coins depict the Vaishnav sect. Vaishnav Deities on Tripura Coins include Krishna and Vishnu! Lord Krishna is believed to be the incarnation of Lord Vishnu. From his birth to when he turns young, his stories are mesmerizing, magical and inspiring. He is also known as Govinda, Mukunda, Madhusudhana, Vasudeva, etc. Not just in our religious texts, but our beloved lord Krishna is depicted on various Coins of Tripura also. One of the best examples of Krishna being depicted on coins is the coins of Tripura. 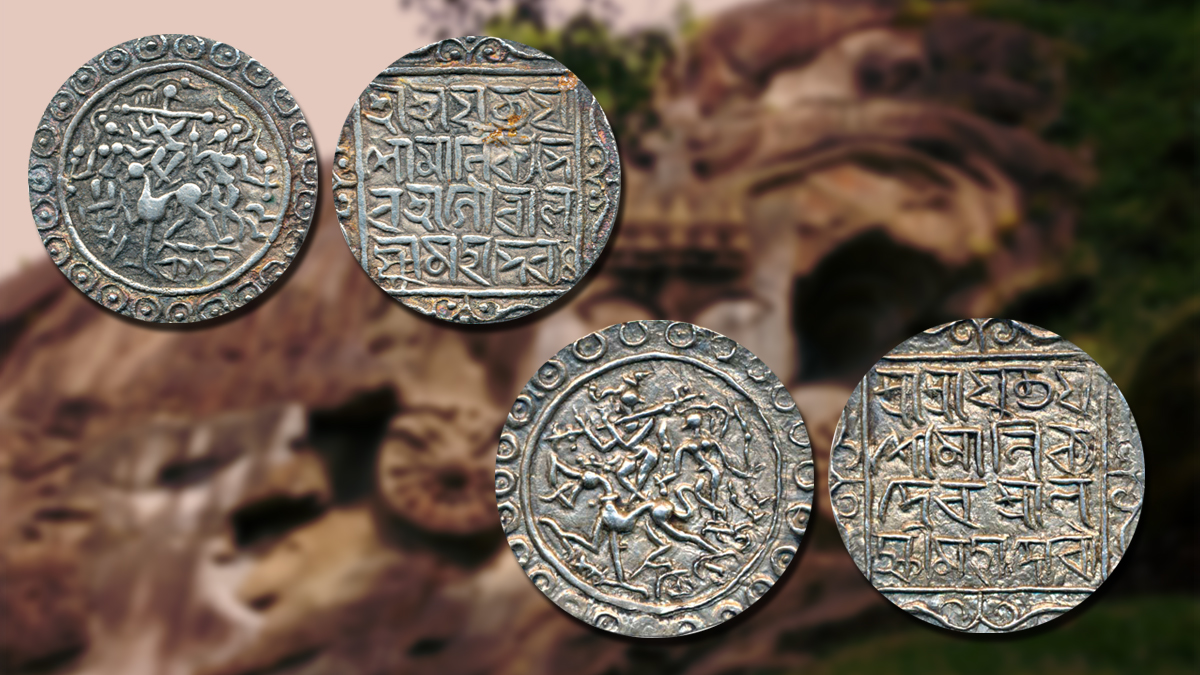 Manikya kings such as Vijay Manikya, Yasho Manikya, and Anant Manikya issues coins depicting Krishna. The coins depict Krishna Krishna standing on a lion or a cow facing left, playing the flute. He is surrounded by gopis. One of the best specimens of Ananta Manikya’s coins is the one which has Krishna on it. It is a silver Tanka which weighs around 10.72g. The obverse of the coin portrays Lord Krishna playing the flute, standing on a dais with female attendants on either of his sides holding flowers.

Vishnu is also one of the Deities on Tripura Coins. Being the protector of the universe, Vishnu is one of the most worshiped gods in India. Vishnu and his Avataras are the subjects of various artistic and literary creations. Similarly, the worship of Vishnu was popular in Tripura. 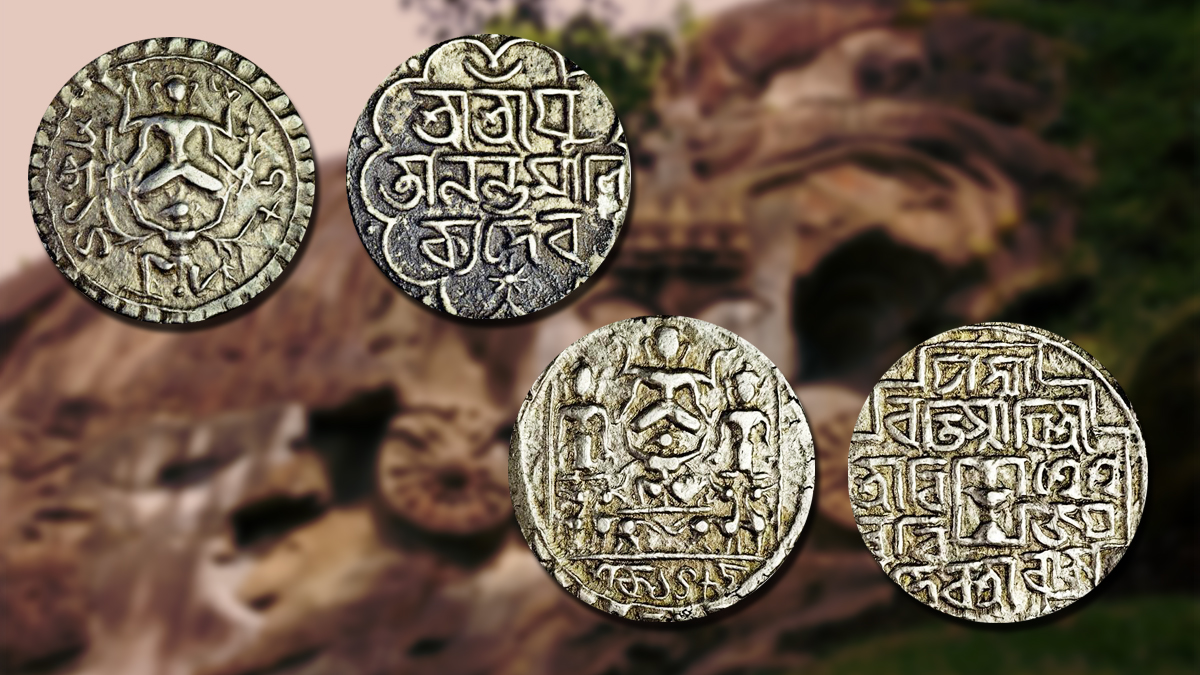 Vijay Manikya and Ananta Manikya issued coins depicting Vishnu. The coins depict Vishnu seated cross-legged supported by Garuda advancing left with two attendants, all supported by four animals. The year of issue is inscribed in exergue. Some coins portray the most peculiar feature of the coin that is Shiva-lingam in a small square in the center on the reverse. The coin portrays both the belief and co-existence of Vishnu and Shiva.

Dharma Manikya was the Last King of the Manikya Dynasty. During this time onwards the kingdom of Tripura gradually became politically unstable; naturally, the number of coins issued also decreased. Over the years, they tended to become more like ceremonial issues. The epithets of the later coins became stereotyped; the invocations changed only according to the religious beliefs of the rulers. By the end of the 18th century, these hand-struck coins gave place to ‘semi machine’ issues. By the second half of the 19th century, the coins were struck fully by machines in their own mints. Although Tripura coins were issued continuously for about five hundred years, their circulation was mostly confined to the territory of the state or to surrounding regions. Most of the coins are silver, but a few are in gold. Tripura coins are some of the finest specimens of regional calligraphy, numismatic execution, and iconographic representation in the whole history of the coinage of this subcontinent especially the depiction Deities on Tripura Coins.