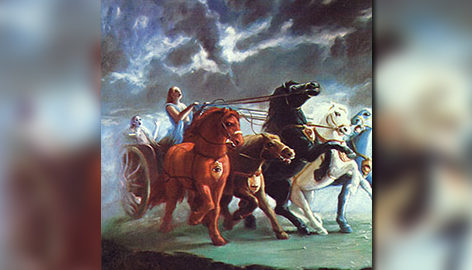 Ancient civilizations used chariots for war, racing, processions, and travel. Its evidence is reflected through the coinage of the Roman civilization.  On these ancient coins the chariots are illustrated being driven by emperors, important personages and even gods and goddesses. The chariots are usually pulled by the horse but in this coinage, we also get chariots pulled by serpents, elephants, bulls, etc. The excitement related to the chariot is quite archetypal. The Latin words ‘Carrus’ is the root of the English word ‘chariot’. The descriptions of Roman historian and the excitement expressed in there writing was phenomenal when they talk about the chariot racing around the Circus Maximum in Rome.  Some of the animals were particularly assigned to pull the chariot for the important people of the empire. So let’s explore the amazing illustration of chariots on Roman coins. 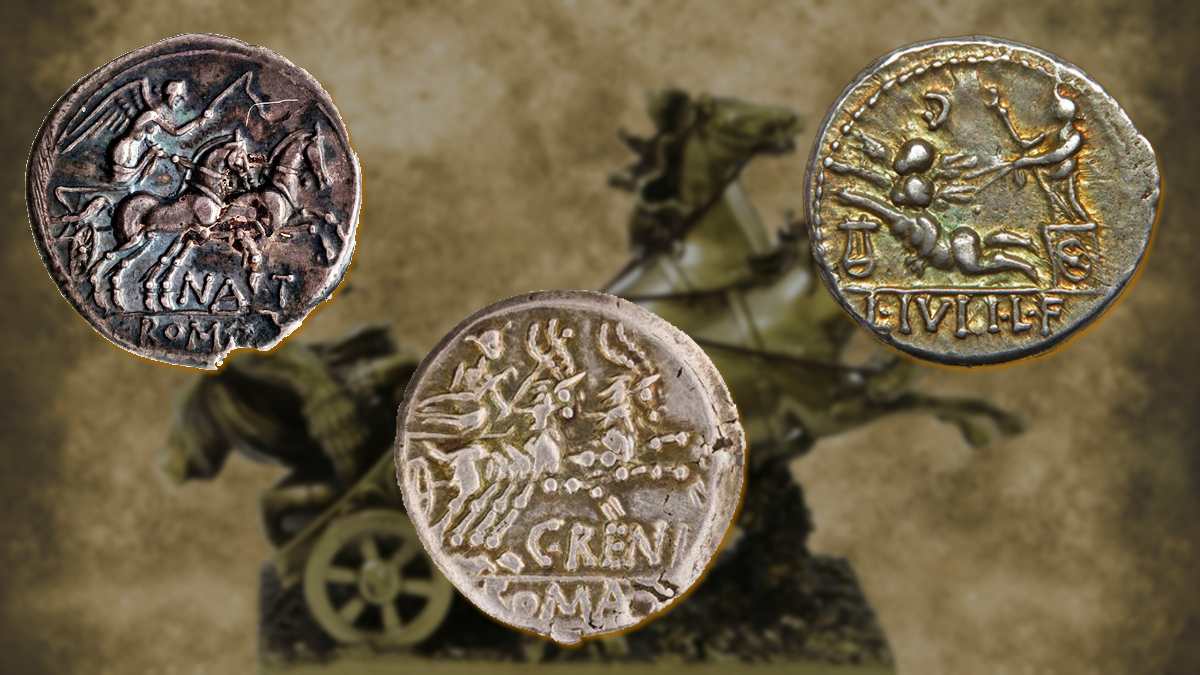 Biga: Chariot pulled by two horses or other animals

The above-shown image consists of Roman coins illustrating two animals pulling a chariot, this vehicle is usually called a Biga. It was used in Rome for sport, transportation, and ceremonies. The most common animal on this chariot was a horse, but on art or architecture or even on ceremonies it was replaced by other animals. The driver of the biga was called Bigarus. In general philosophy, biga represents the moon. These presentations are a quite fascinating aspect of chariots on Roman Coins

The first coin features two horses pulling chariot on coins which is a common icon in republic coinage. On the roman coin are two yoke chariots by the goddess Luna because it is scared for her. The above-shown denarius depicting two-horse chariots were drawn by the goddess Victory. The philosophical theory relates the duality of the horse with a metaphor of the charioteer soul divided by genesis and epigenesis.

The second coin depicts the Biga of goats, in Roman culture goat represents victory, intelligence, and even voraciousness. The Roman god Faunus was also a half-goat. Goat blood was used in religious scarifies. In the above coin, Juno is riding the Biga of goats.

The third silver denarius depicts the goddess Venus riding on a Biga pulled by Cupids. In Roman Mythology the God of affection and desire was Cupid. Cupid is said to be the son of the goddess of love Venu.

There are also Biga of Hippocampus drive-by Neptune, Hercules driving the Biga of Centaurs. There are also elephants and Stag Bigas. 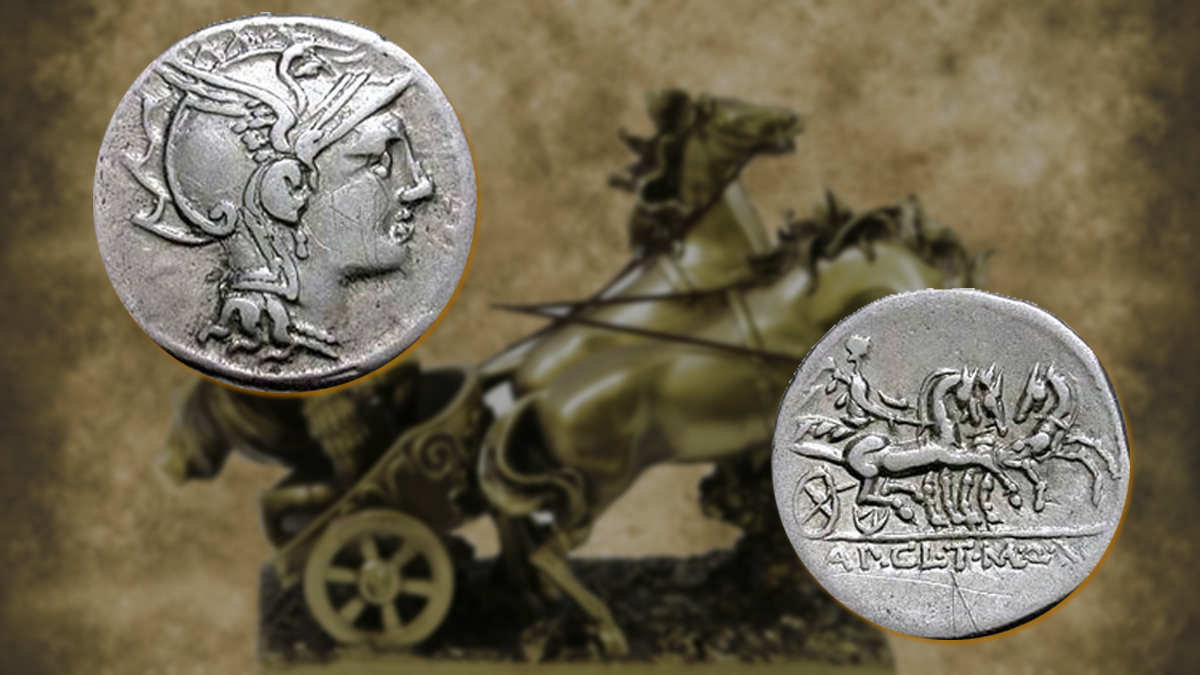 Triga: Chariot pulled by three horses or other animals

A three-horse chariot ridden by goddess has been a rare sight on the Roman architecture. In ancient Greece, this chariot might be used for war, but in terms of racing its reference was never found. Yet, the popular chariot of Achilles and Iliad was drawn by two immortals and one mortal horse.

The driver of a trig was called Trigarius since the yoking of three horse chariots was uncommon. The Etruscan racing used the third horse as a trace-horse on the turns. The Isidore of Seville portrayed Triga has infernal gods and the three horses represent the three ages of human being childhood, youth and old age.

Roman rarely race three-horse chariots, during Emperor August reign Dionysius mentioned triage racing. The first-time Triga appeared on Roman coinage around First Punic War with goddess Victory driving it. The denarius of the Roman Republic issued in 111-110 BC depicted Victory driving Triga on the reverse side; it also illustrates the initials of the three moneyers Appius Claudius, T. Manlius (Malloleius or Mallius) and Q. Urbinius in the exergue.

The above-shown silver denarius coin depicts Victory driving the Triga pulled by three horses.  The depicting of this chariot is a rare sight on both Roman architecture and coinage. The reference shows that Triga was used in war, but in games was quite less. The Etruscan used three horses in a race and the third horse was used as a trace-horse. Triga is most scarcely represented on the coin and have a great aspect on the theme of chariots on Roman coins. 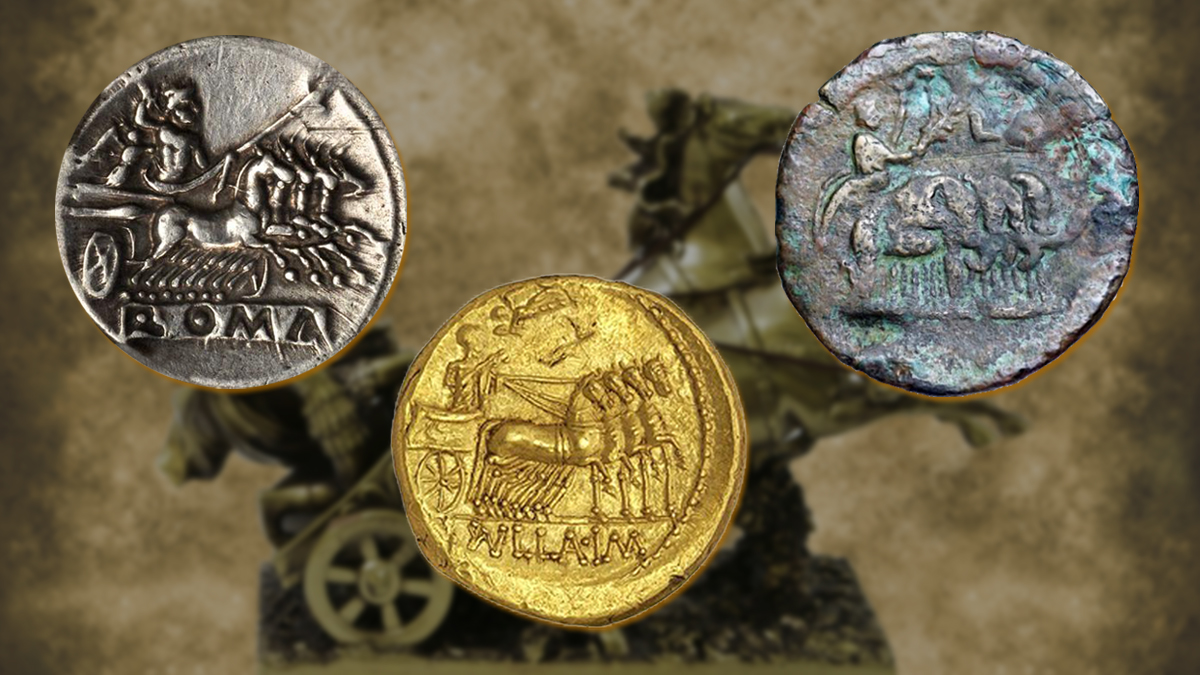 Quadriga: Chariot pulled by four horses or other animals

The Quadriga is pulled by four horses often pulled by a male deity, but few goddesses are also featured begin driving this chariot. God Apollo is often depicted driving the four-horse chariots on Roman coins. In the above-shown silver didrachm (https://www.mintageworld.com/media/detail/4548-didrachm-of-roman-republic/) goddess Victory is driving the horse chariot. Quadriga appeared on all most all Roman pantheons including sol, Minerva, Libertus, Jupiter Mars and even the deified emperor’s. On the coin of Phoenicia, the god of the seas Poseidon was driving quadriga pulled by the Hippocampus.

The second coin in the image depicts gold Aureus of moneyer Sulla, L. Manlius Torquatus. It illustrates Triumphator is driving a quadriga (Four horse chariot) holding reins in the left hand and caduceus in the right hand. He is crowned by Victory flying behind it. Legend ‘ L·SVLLA·IMPE’ or ‘L·SVLLA·IMP’ is depicted around it within the dotted border.

The third coin is Ar drachm of Roman Alexandria, Egypt. It was stuck under Emperor Trajan around Circa Ad 98-117. The Emperor is illustrated driving the Quadriga of elephants. The Emperor is laureate-headed, wearing a toga, holding an eagle-tipped scepter and a branch. 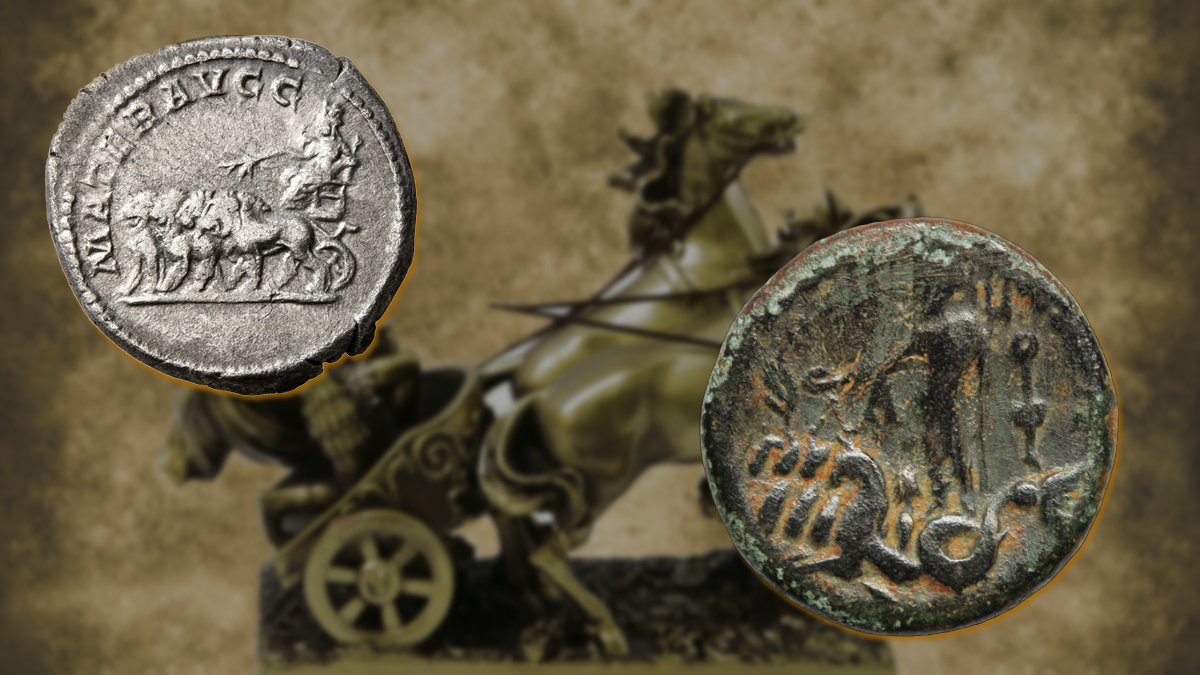 The first coin in the above-shown image depicts the quadriga of a lion. The lion quadriga is driven by Phrygian great goddess ‘Cybele’ – she is the guardian of vegetation and fertility and was quite venerated in ancient Rome.  This Ar denarius depicts Julia Domna as Cybele seated on the quadriga of the lions holding branch in her right hand. The motif of Goddess Cybele in a quadriga drawn by the lions is common. One of the most famous depictions of this scene is on the Parabiago Plate found near Milan in 1907.

The second coin depicts Hippocampus, This marine mythical creature is depicted typically with an upper-body of a horse and the lower body of a fish. The reverse side depicts the Roman god Neptune holding the reign of Hippocampus quadriga and ridding towards the right with brandishing a trident. Above it ‘I’ is illustrated and below legend ‘Q.CREPER.M.F/ROCVS’ is inscribed. 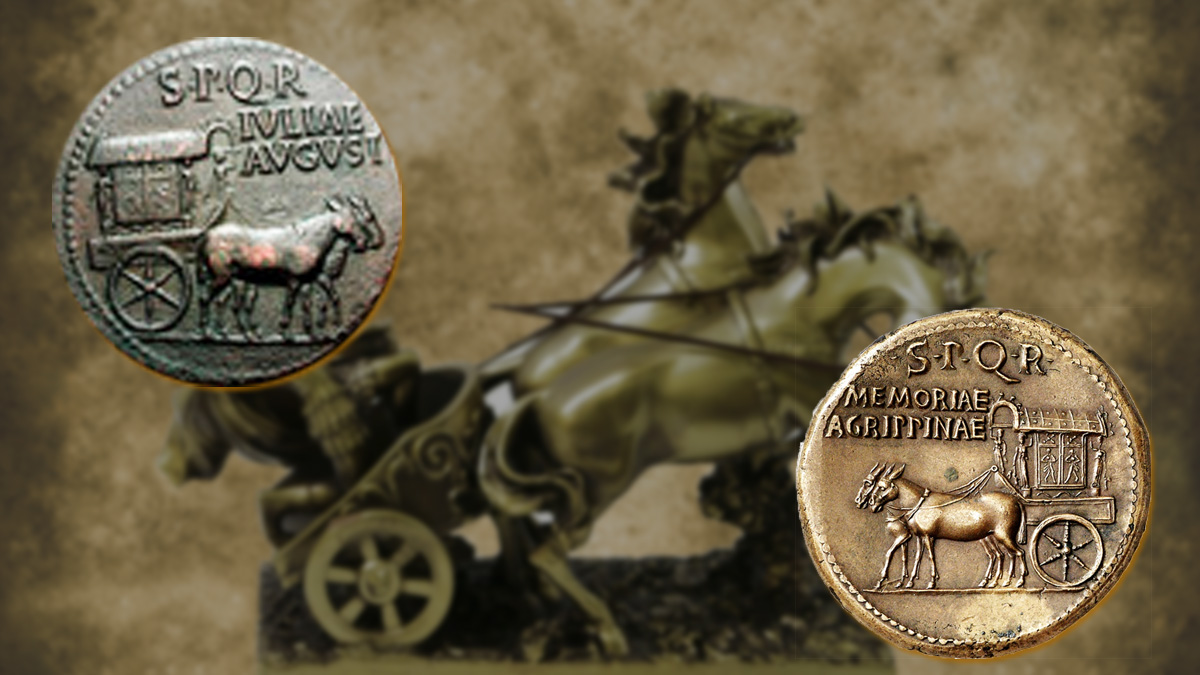 Carpentum is a cart or chariot serving the rural purpose and other public spectacles. It is a two-wheeled carriage enclosed with an arched or sloping cover overhead. This cart is commonly pulled by a pair of mules, but rarely by oxen and horses.

Romans first used carpentums for traveling. Later on, women used this cart to illustrate their rank on festivals with the special permission of the Senate. Later on, the emperor used it on certain occasions.

The first coin is a Sestertius of Tiberius issued around 22-23 CE depicted carpentum. The privilege of riding on this chariot was only given to the Vestal Virgins and a few females. This coin may refer to the fact in 22 CE when the senate granted Livia the right to sit with the Vestals at the public games and she may also be granted to ride off the carpentum.

The second coin is similar to the first coin the only difference is the craft is facing towards right rather than left. There is also a highlight about the Roman chariots that are the six-horse chariot called seiuga. It required a high degree of skill from the drive to handle this. This chariot was hardly used for racing; even the iconography of this chariot on the coin was absent.

It is also interesting to note that around 2,000 years ago, Circus Maximum used to host around 250,000 people in Rome to watch chariot races. With dozens of races each day, the races consisted of 5 to 12 laps around the almost one-mile long track.

Animals on the Roman coin by T.R McIntosh