On 15th August 1949, a new series of  Postage stamps were put to sale, it depicted archaeological and historical interest.  These stamps constitute free India’s first definitive series stamp and were intended to replace the King George VI stamps. The idea behind designing the stamps was to promote the idea of nation and its pride. To promote the notion that India had a great past. These definitive stamps depicted paintings, monuments, stone and metal sculptures. 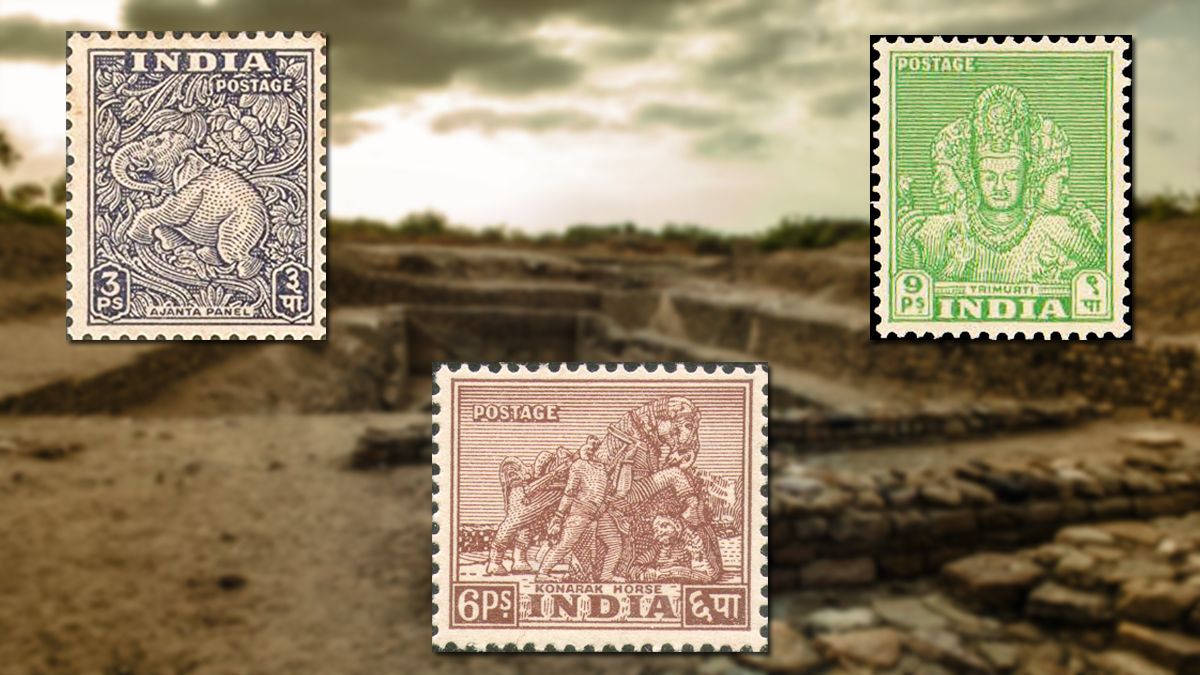 As part of the first series of definitive stamps issued after independence, this Ajanta elephant on 3 pies definitive Indian stamp holds the position of the most favourite and sorted after stamp of this series.

The elephant shown in this stamp is taken from the 1st cave of Ajanta. This Tempra painting famously called the Ajanta Frescos is studied and knows all over the world. This painting reflects a running elephant with a dense jungle full of flowers and trees.

The elephant has a significant place in the Buddhist culture and text. The dream of the Mahamaya is describing a white elephant enters the womb of Gautam Buddha’s mother indicating the arrival of a great being.

The great Temple of Sun god ( Suryadev) was built on the eastern shore of India. This Black Pagoda was built by King Narasimhadeva I of the Ganga dynasty in the 13th century. It’s believed that a workforce of twelve hundred artisans and architects have invested some of their best skills to create this wonder.

The temple is built in the shape of a chariot the horse is located a little far from the main temple sanctum. This definitive stamp was used for fee certification of posting. It was used for blind literature packets up to 2lbs for inland and foreign posting. These 6 paisa definitive stamps were printed in Nasik press in purple-brown colour.

The elephant caves in Western India have found one of their most perfect expressions. Elephanta Caves are popularly known as Gharapuri meaning ‘Place of Caves’. Finely carved from black basalt rock they are dated back to the 5th to 8th century BCE.

The Trimurti is the most attractive sculpture in Cave no 1. The statue of Eternal Shiva (Sadashiva or Trimurti) at Elephanta is rich in multiple associations and meanings, an attempt to render the Godhead in a visible form. Shiva’s majestic central face (Tatpurusha-Mahadeva) is calm and detached, the eyes closed in meditation. His right-facing head, Vamadeva-Uma, is peaceful and feminine, with an out-thrust lower lip, contemplating a lotus. His left-facing head, Aghora-Bhairava, is fierce and masculine, scrutinizing the head of a cobra.

India Post has frozen the Trimurti Sculpture by issuing a stamp of 9 Pies definitive stamps in 1949! This UNESCO recognized World Heritage Site, the Trimurti sculpture with the Gateway of India in the background, is the logo of the Maharashtra Tourism Department (MTDC). Percy Brown described Trimurti as “the creation of a genius”. 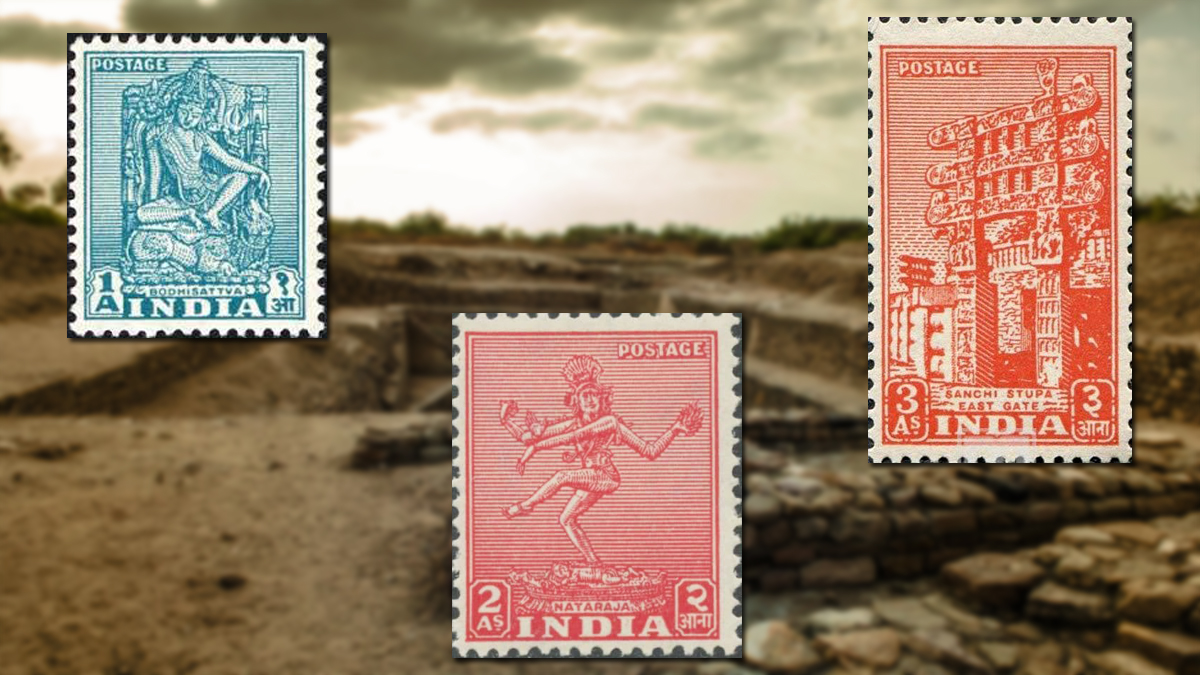 The sculpture of bodhisattva, Avalokitesvara. The term “bodhisattva” refers to a person that has been awakened by the Buddhist spirit.

Bodhisattva’s body shown tan, darkened only by the locks of curly hair, is delicate and elegant. He is adorned with pearls and other attributes of traditional Indian jewellery. On his head sits a magnificent crown, which at some point was most likely colour in extreme detail. His eyes are lowered in a meditative state. His calm, spiritual face sets the tone and mood of the room. In his right hand, he holds a lotus blossom, which may represent his spiritual awakening.

These definitive stamps were later re-issued as the first stamp was wrongly reversed (left hand raised instead of right hand) in the 1 Anna value stamp which was rectified in the fresh issue of 15 July 1950. These second supplementary issues were necessary as the foreign postal routes were increased the surface route from 1st December 1950. The rate for postcards was increased from 2 Anna to 21/2 Anna and letter 31/2 to 4 Annas.

If you are interested in finding the error stamps, you can go online to obverse that. Many images of Indian stamp online is available. It will be a great way to know about the error stamp of India.

To recognise and respect Indian art, India post issued the definitive stamps on Nataraj of Thiruvalangadu in 1949 at the second anniversary of Indian Independence.

This Nataraj on a stamp is shown with four hands representing the cardinal directions. He is dancing with his left foot elegantly rose and the right foot on a prostrate figure — ‘Apasmara Purusha’. His upper left-hand holds a flame and the lower left hand points down to a dwarf, who is shown holding a cobra. Nataraja’s upper right-hand holds a ‘dumroo’ that stands for the male-female vital principle, the lower hand shows the gesture of assertion: “Be without fear”.

Any form of dance that connects a dancer with the cosmos represents the message of Nataraj and understands the enjoyment and bliss of dancing. Famous dancer and musician Michal Jackson describes this in his word as “Consciousness expresses itself through creation”. This world we live in is the dance of the Creator. Dancers come and go in the twinkling of an eye but the dance lives on.”

Sanchi Stupa is one of the oldest structures in India; it is one of the most important monuments of Indian Architecture. The moment we hear Sanchi Stupa, our mind goes back to 300 BCE to Ashokan Period. This Stupa is located in Sanchi Town, Madhya Pradesh, India. It is the oldest stone structure in India and was built during the Mauryan period. With over 2000 years of Indian history, this monument remains a living example of the art and architecture that flourished during the rule of Emperor Ashoka.

India Post depicted the gate of the Sachi Stupa on this definitive stamp. This stamp was used for the foreign ‘acknowledgement of the delivery fee. It was also used in Airmail posts for Persian Gulf countries.

A special Independence Day cover was put to sale on 8th august 1949 with this definitive stamps series to celebrate the second year of independence. A special cachet which was exclusively used on the day was bought out to supply to the following post office of Agra, Ahmedabad, Ajmer, Allahabad, Ambala, Banaras, Bangalore, Bombay GPO, New Delhi, Nagpur, Lucknow, Indore, Calcutta, Hyderabad, Poona, etc. these series was issued as the republic definitive Indian stamp rather in commemorative stamp to replace the old stamp system of British India.  Every section of the old British authority was replaced by democratic India