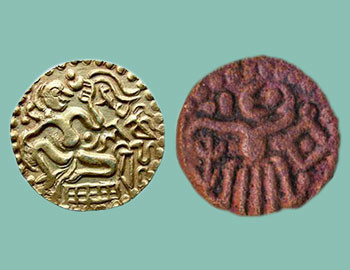 It was like, after looking at the prosperity of Kerala, God decided to settle down here and make this his own country. History of the southern part of Indian subcontinent dates back to the prehistoric period in 5,000 BC, which is why the coinage from this idyllic part of the country saw a lot of interesting transitions under different independent dynasties that ruled the region. When you’re exploring the coins of India, you can’t miss out on these beautiful coins.

Archaeological excavations like the Laterite rock-cut caves, Hood stones, Hat stones, Dolmenoid cists , Urn burials and Menhirs have revealed the native development of the ancient Kerala society right from the Paleolithic age which then continued through the Mesolithic, Neolithic and Megalithic ages. Studies also indicate that there was a possible relationship with Indus Valley Civilization during the late Bronze Age and early Iron Age.

The honey pot for trading

Popularly known as the land of spices, Kerala was a major attraction for Babylonians, Assyrians and Egyptians as early as 3000 BC. The Malabar Coast was used extensively for exporting spices across different parts of the world. This fact is proved by the hoards of Roman Gold and silver coins and finds of Greek, Chinese and Arab coins that were discovered. A rare hoard of Roman silver from Nedumkandam and an AKSUM copper coin from Karur, the capital of Chera empire were also unearthed.  Kaarshapanam coins are some of the ancient coins of India that were excavated at Kottayam, Eyyal and Ankamali prove Kerala’s connection with the of Magadha Mauryan period.

Named by Ashoka the Great

Kerala was referred as Keralaputra on a rock inscription by emperor Ashoka in 3rd century BC. Keralaputra was one of the five independent Tamil kingdoms during Ashoka’s time, the others being Chola, Pandya, Tamraparni and Satiyaputra. Researchers believe that Keralaputra is an alternate name of the Cheras, the first powerful dynasty based in Kerala. The Cheras ruled western Malabar Coast, the Cholas ruled in the eastern Coromandel Coast and the Pandyas in the south-central peninsula. The unknown Greek Mariner and author of ‘Periplus’ discovered the earliest gold coins of Kerala, called Parasuraman Panam. These coins of India had a unifaced hold spherule and they resembled the coinage of ancient Tamizhakam. Vellichakram (silver Chakram) had been in circulation throughout Kerala right from the last phase of 16th century, which is evidenced by the hoard obtained from the Siva temple at Kasaragode.

Archaeological excavations at Kaveripattanam reveal that Chola coins were found in square and some other shapes which are classified as unique coins of India. These coins were characterised by the emblem of the Cholas which features a standing tiger with its tail upraised on one side and an elephant on the other side. Some circular lead coins dated to ‘circa’ second century A.D were influenced by Satavahana, bore a unique symbol and the legend ‘Atinan etiran Chandan’ meaning Atinan, the successor of Chanda on one side. The other side bore the regular emblem.

Coins struck by the Chola ruler, Raja Raja Chola during their second regime in medieval India differed in fabric, style and in the gold purity. The coins of Chola Empire are considered as some of the most unique coins of India that were issued in gold, silver and copper. The Chola ruler, Uttama Chola struck silver coins with the royal emblem of “Tiger facing two fishes” on the obverse side. The coins also contained the Nagari legend “Uttama Chola”. During his reigning period, Raja Raja struck gold fanams that bore the legend Yuddha Malla on the obverse. Apart from these coins, silver and gold ‘kahavanus’ were also struck by the king. This type of coins bore the standing king on the obverse and the seated king on the reverse side of the coin. Rajendra Chola struck coins including the legend “Sri Rajendrah”.  The succeeding generations followed an identical pattern “Standing King on the obverse” and “Seated King on the reverse”. The coins sometimes bore the legend “Raja Raja” and sometime the legend “Ku“. Chola coinage also extended to some parts of Sri Lanka in 993 when Raja Raja Chola sent a large Chola army which conquered the Anuradhapura Kingdom, in the north.

Silver punch marked and die struck copper coins were issued by the Pandyas in the early period. There were constant tiffs between Pallavas and Pandyas in the area of Tanjore district.

They ruled for some time in the ninth century A.D and then were conquered by the Cholas again during the eleventh twelfth centuries A.D. A few gold coins were issued by Pandya rulers in the 13th century. These coins of India bore the image of a fish, sometimes singly, sometimes in pairs along with symbols like a bow, a conch, a discus etc. Some of the coins had the inscription of the words ‘Pandava Narapa’ in Kannada attributed to Maravarman Sundara Pandya I (1216-1235 A.D.) or to Jatavarman Sundara I (1215-1270 A.D). Coins with the inscription ‘Sri Pandya Dhananjaya’ in Nagari or in Telegu were attributed to Maravarman Sundara Pandya II (1238-1253 A.D). The inscription on the silver and gold coins during the Pandyas, were in Sanskrit and the copper coins had the Tamil legends. Besides the fish emblem, the copper coins of the Pandyas, also featured the Chola standing figure or the Chalukyan devices associated with a fish. The constant variations in symbols as per different dynasties probably indicated the conquests and defeats of the Pandiyan Empire.

In the 7th-10th centuries, after the revival of the Kingdom, the predominant symbols used were one or two fishes, and the Pandyan bull. The inscription on the silver and gold coins is in Sanskrit, and most of their copper coins have Tamil legends.

Second Innings of the Chera Dynasty

Kulasekhara dynasty of Mahodayapuram or the second Chera Kingdom existed from c. 800–1102 and was ruled by King Kulasekhara Varman. His kingdom comprised of the whole of modern Kerala and a small part of modern Tamil Nadu. During his regime, Kerala witnessed a flourishing period of art, literature, trade and the Bhakti movement of Hinduism. A Keralite identity, distinct from the Tamils, became linguistically evident during this period. Kannur silver panam narrates a story about the Muslim matrilineal Head of State. The regional heritage of Kozhikode and Kochi can be uniquely identified by coinage in these regions, namely gold panam and silver puthan respectively.

There were a series of Chera-Chola wars in the 11th century which considerably hampered foreign trade in Kerala ports. Buddhism and Jainism vanished.  Caste system emerged, breaking the society into pieces.  Kulasekhara dynasty finally was conquered in 1102 by the combined attack of Later Pandyas and Later Cholas. In the 14th century though, Ravi Varma Kulashekhara (1299-1314) of the southern Venad kingdom was able to gain power back again over southern India, for a short period of time. After his death, due to lack of central administration, the state was split into about thirty small local territories under Nair Chieftains. Out of them, the most powerful were the kingdom of Samuthiri in the north, Venad in the south and Kochi in the middle.

In the 12th century, the copper coins of the Venad Chera are reminiscent of the “Octopus king” coins of Raja Raja Chola. However the most distinguishing feature of these coins of India is that the king is flanked by a battle axe.

The Travancore Royal family ruled the kingdom of Travancore princely state. It comprised most of modern day southern Kerala, the Kanyakumari district, and the southernmost parts of Tamil Nadu. Maharaja Marthanda Varma is popularly known as the founder of ‘modern Travancore’. Travancore and the princely state of Cochin merged on 1 July 1949 to form the Indian state of Travancore-Cochin. On 1st November 1956, Travancore-Cochin joined with the Malabar district of the Madras State (modern day Tamil Nadu), to form the Indian state of Kerala. The last Maharajah was Chithira Thirunal Balarama Varma and the last Dewan was PGN Unnithan.’

State of Travancore minted a special Travancore rupee from 1600 to 1946, which unlike the other coins of India minted by the British, was subdivided into 7 panam, each of 4 chakram, each of 16 cash. Different denominations of silver coins were issued like 2 chakrams, 4 chakrams etc. in 1901. This coinage continued until 1949, after which the Indian rupee took over.

The Numismatics Museum at the Koyikkal Palace

If you want to learn more about coins of Kerala, visit this museum which exhibits are some of the oldest coins like – Ottaputhen, Erattaputhen, Kaliyugarayan Panam etc. The place also houses a Venetian coin named Amaida which is believed to have been presented to Jesus Christ. Other coins displayed include Karsha which are nearly 2500 years old and are considered as rare coins of India. You can also take a look at the world’s smallest coins Rasi, out of which Sreekrishna Rasi, is the one issued by the local kings of Kerala around the 10th century. The Anantharayan Panam is the first modern gold coin of Travancore which was circulated in the 15th and 17th centuries, Kochi Puthen are coins minted by the Kochi Kingdom which also had Indo-Dutch Puthen (1782 AD) as variations. Apart from that, the silver coins minted in Travancore Lekshmi Varaham, a wooden board with small niches used to count small coins called Rasi Palaka etc are also exhibited here.

To learn more about coins of India, Mintage World is the place to be.