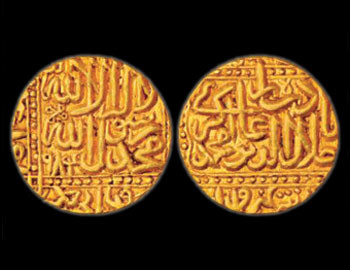 Akbar was the third ruler of the Mughal Dynasty in India from 1556 to 1605.  He succeeded Humayun and went on to become one the greatest Mughal Emperors to conquer almost the entire Indian Subcontinent north of the Godavari river. Coins of Akbar also reflect the power of this mighty emperor and they are the most exquisite and varied among the ones that were minted by other Mughal emperors. He was the one who made his mark with the help of Mughal military apart from political, cultural, and economic reforms that he introduced. His religiously and culturally diverse policies helped him gain support of the non-muslim sections of the society. He was the one who revolutionised Mughal style arts, painting, and architecture. Akbar preached about Din-i-Ilahi, a beautiful amalgamation of Islam, Hinduism, Zoroastrianism, and Christianity. He trusted his subjects, irrespective of their caste or religion and offered them important positions in the administrative and military setups. He got rid of the sectarian and celebrated all kinds of festivals. 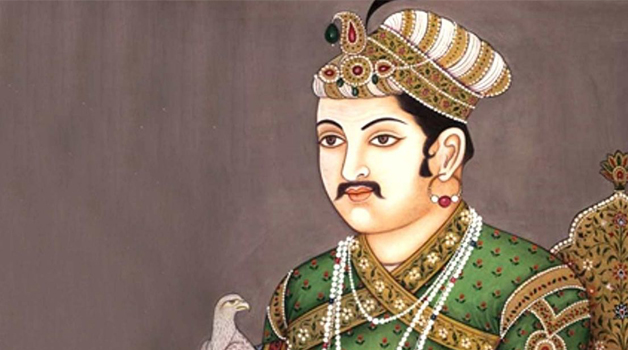 Like his ideology, coins of Akbar also reflect secularism. The Hindu symbol of Swastika appears on many of his coins along with the “Kalima” (Islamic affirmation of faith). He also issued gold half mohurs with depictions of Rama and Sita on them. Some silver coins also had the words “Rama” and “Gobind” on them.

He appointed one of the most skilful engravers Moulana Ali Ahmed for minting his coins and took personal interest in coinage. In AH 987 two interesting silver rupees were minted from the Lahore, Ahmadabad and Tandah mints of the Jaljalala types which instead of “Allah-u-Akbar” bore the slogan “Akbar-u-Allah”. He wanted to test the reaction and wanted to associate divinity with his personality. He never issued these coins from the capital Fatehpur as it could have lead to opposition from the fundamentalists.

Jaljalal type coins of Akbar bore ilahi dates and many of them features the Persian month of issue as well. Experts believe that Akbar might have struck almost 10,000 different types of coins and all of them were produced using handcrafted dies. Considering the designs, the same calligrapher and die-makers were involved in minting coins from a particular area.

Symbols on Coins of Akbar

The most interesting aspect of coins of akbar are the symbols used on them. A duck was depicted on gold mohur from Agra mint and a rupee from berar mint. A Hawk was depicted on a commemorative coin that was issued to celebrate the victory over fort Asirgarh. Kalpi rupees feature a fish and a tortoise can be seen on coins form Hazrat Delhi Mint. A Trishul symbol appears on one of the Agra rupees and the Surya or the sun appears on one of the rupees from Hissar Firooza mint.

Different gold coins were issued by Akbar in varying weights and denominations. The heaviest of them were the Sihansah which were equivalent to 101 lal jalali mohurs or thousand rupees. The smaller denominations were rahas, atma, binsat, chahargosha, chagul, ilahi, aftabi, lal jalali, Adl gutka. People were allowed to get their won gold, get them refined and stamped on a payment of seigniorage of 5 ½ percent. Giant coins of Akbar were generally bullion coins which were minted to celebrate a special event or given away as souvenirs.

Kalima type coins were issued from the beginning of his rule to Ilahi 30. The obverse featured “Kalima” (The muslim affirmation of faith) in the centre with four caliphs. The reverse had the name and title of the emperor with a pious wish, the name of the mint and the date. Except for the uniquely shaped mehrab coins, all others were circular in shape. In AH 985, Akbar put forth the idea of issuing square shaped coins which took some time to be implemented. On the 30th year of his reign, gold coinage of Akbar went through another significant change. Instead of Kalima, the Ilahi creed inscription “Allah-hu-akbar jaljallalah” appeared on the obverse which translates to “God is great. Glorified be his glory”. Instead of the Hijri year, Ilahi year appeared, sometimes along with the Persian Month. Mintage World has detailed information about five mohur gold coins, the unique 3 mohur gold coins and other beautiful gold coins issued by Akbar. The 5 mohur gold coin of Akbar weighed around 54.2 grams and was die-struck at Agra mint. The obverse has the inscription “Jalal Al Din Muhammad Akbar Badshah Gazi” in arched square “Al sultan Al Azam Al Khaqan Al Mukarram Khallad Allah Tala Mulkahu Wa” Sultanate, mint name Agra and Year 971 on left of square. The 3 mohur coins of Akbar weighed around 32.3 grams

Akbar’s first copper coins were similar to those of Humayun. The obverse featured the name of the mint along with “Falus”, which literally meant money. The reverse featured the Hijri Era year in words and sometimes in numerical as well. During the first few years of his regime, some coins he minted featured his name. Some coins even bore the Suri pious wish “Al Amir Al hami Uddin wa ‘l Diyan”. Akbar was very young when he came into power and the state was managed by Bairam Khan. Silver coins did get some attention but copper coins were modified to feature Akbar’s name by the locals. In the final 20 years of his regime, Hijri dates were replaced by Ilahi years, the month of issue was also indicated on most coins. Falus was replaced by “Tanka Akbar Shahi” or “Neem tanka Akbar Shahi” (half tanka). The copper dan was introduced later which was associated with Akbar’s system of weights. The Akbar dam weighed 20.9 grams and was exchanged at 40 per rupee. The Akbari unit of weight “The Ser” was fixed at 30 dams. The fractional units of copper coins were Adhelah, Paulah, Damri. Mintage World has detailed information about different kinds of copper coins of Akbar. Many copper coins of Akbar featured the swastika symbol.

Just like the stature of this powerful emperor, his coinage was also regarded to be highly innovative and artistic in comparison with other Mughal rulers. Coin collectors all over the world are fond of collecting some of these gems.

Coinage of Akbar- The connoisseur’s choice by Andrew Liddle