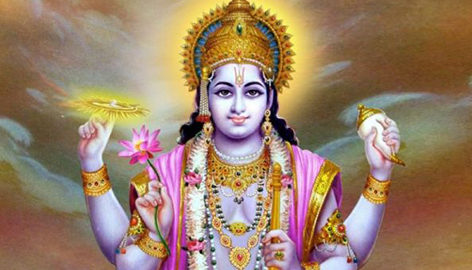 Hindus worship a lot of Gods and Goddess. But the most fundamental of Hindu deities are the Trinity- Brahma (The Creator), Vishnu (The Preserver or Sustainer) and Mahesh (The Destroyer). The peace-loving deity of the Hindu Trinity, Vishnu, represents the steadfast principles of order, righteousness, and truth. He is said to descend in form of an avatar to restore cosmic order.

These Avatars play a major role in shaping human evolution through centuries. They have been an inspiration for many works of art. Jayadeva’s Geet govinda is perhaps the most unique literary work. 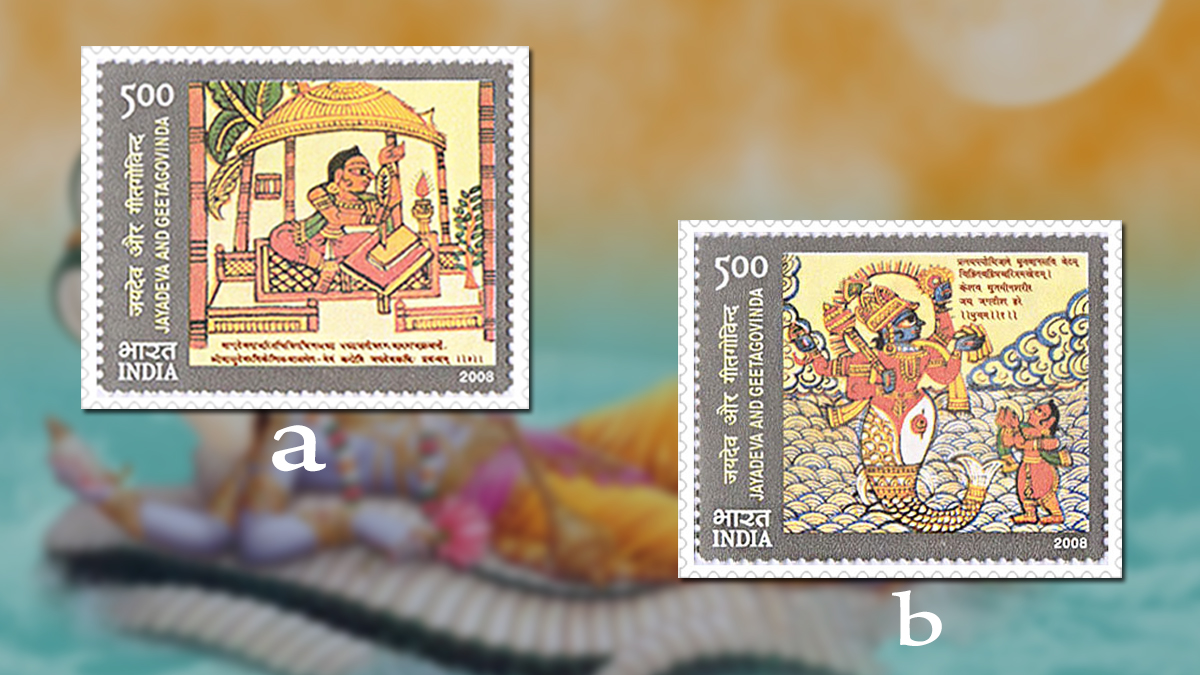 The Geeta Govinda is a work composed by the 12th-century Indian poet, Jayadeva. It describes the relationship between Krishna and the Gopis of Vrindavana, and in particular the relation with Radha. The Geeta Govinda is organized into twelve chapters. Each chapter is further subdivided into twenty-four divisions called Prabandhas. The prabandhas contain couplets grouped into eights, called Ashtapadis. Composed in Sankrit, Geeta govinda is has been translated in many languages, adopted in numerous illustrations, performed in variety of singing styles and dance forms!

It’s not a wonder that the Department of Post, India, too has issued commemorative stamps on this treatise. India Post issued a beautiful Miniature sheet depicting 11 stamps; with 10 avatars of Vishnu and one stamp depicting the celebrated poet, Jayadeva.

When the world was about to get extinct, Manu, the king was instructed by the Gods to rescue the life form on earth. And hence he chooses 1 male and 1 female from every species, collects plants of different species and loads them all on the big ship. The whole world was washed up in the rains and as a result, there was no land to stay. A fish (Matsya Avatar) comes to the rescue. The ship was then tied to the horn of the fish and the fish pulls the ship with great speed towards the Himalayas and keeps the ship safe there till the flood water recedes. The new era starts and the king helps in the procreation for the new era.

The second stamp depicts this scene of King Manu and Matsya Avatar of Vishnu. 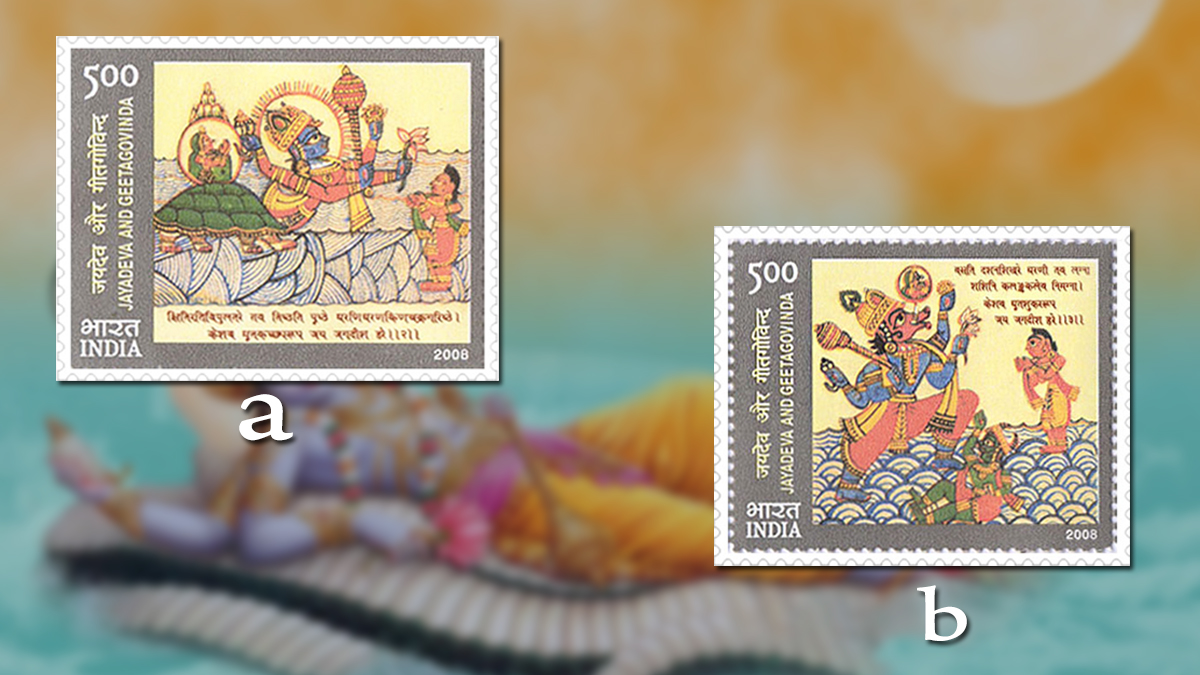 The sage Durvasa once presented a garland of flowers to Indra (The King of Gods), who carelessly gave it away to his elephant who trampled it. Due to this, Durvasa who was famous for his short temper cursed all the Gods (Devas) that they would lose all the strengths. Caught in the curse all the Devas went to Lord Vishnu. Vishnu asked them to churn the ocean of milk, Shirsagara, for the nectar (Amrita). The Devas and Asuras started churning the Ocean of milk, in order to get amrita, the nectar of immortality, with serpent Vasuki as the rope and the mount Mandara as the churning staff. But as churning proceeded the mountain began to sink. To stop the mountain from sinking into the ocean Lord Vishnu took the form of the large turtle or Kurma and kept the mountain afloat on its back.

This how the Lord Vishnu takes his second avatar! This Avatar of Vishnu, the Kurma Avatar is depicted in one of stamp commemorating Jayadeva’s Geetgovind.

The story of the Varaha Avatar goes like this. There was a demon named Hiranyaksha. He had a boon from Lord Brahma that no god, human, demon would be able to kill him. This made him prove that he is immortal and no one can kill him. So, he started displaying his powers everywhere. Once Hiranyaksha stole the Goddess Bhudevi (earth) and hid her under the oceans. Seeing this, all the Gods were alarmed and went to Lord Vishnu for help.

Vishnu remembered that Brahma had forgotten to grant Hiranyaksha immortality against Varaha, the two-tusked wild boar. Vishnu changed himself into a Varaha and dived into the ocean. Seeing Hiranyaksha there, the Varaha challenged him to a fight. Soon, Vishnu beheaded Hiranyaksha and brought back the earth from the depths of the ocean. 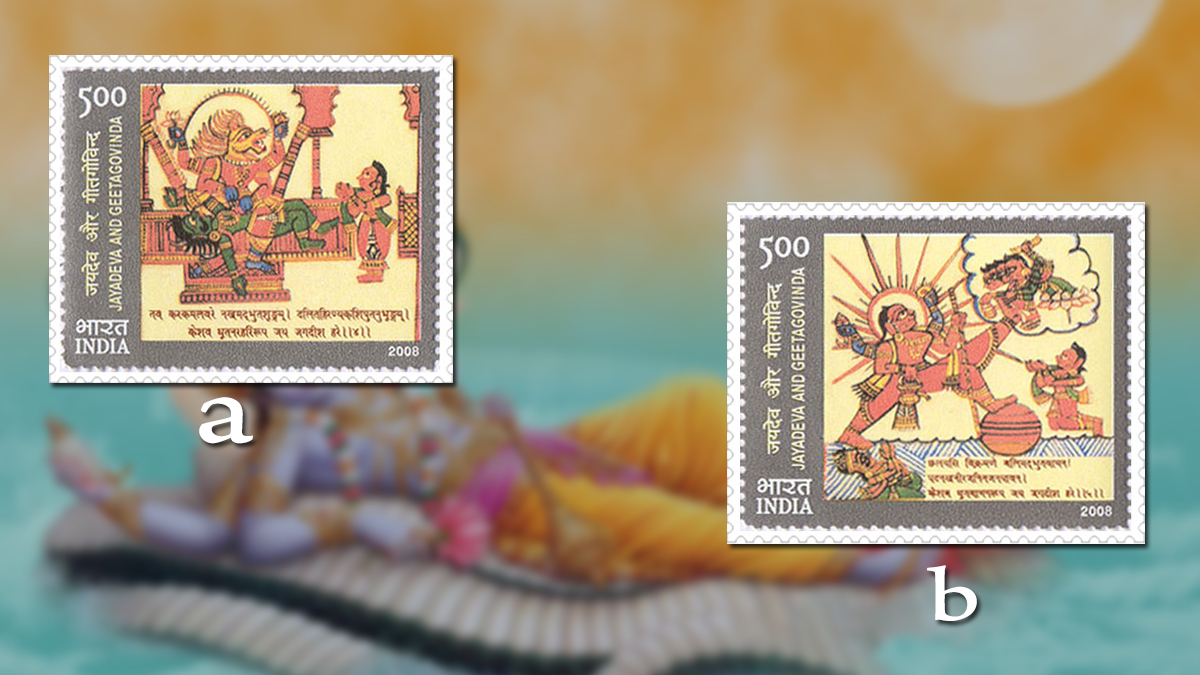 Most of us are very familiar with the fourth avatar of Vishnu ‘Narsimha’ (‘Nara’ means man and ‘Simha’ means a lion). Hiranyakasyapa, a demon, after a great penance was given a boon by Lord Brahma that he be neither killed by a man or beast nor in daylight or at night and neither inside or outside a building. After this, Hiranyakasyapa started considering himself as the Supreme of all Gods.

His son Prahlada was the great devotee of Lord Vishnu and this angered Hiranyakasyapa. He attempted various ways to kill his son but each and every time Prahlada managed to escape. When asked how Prahlad was evading death, he said his Lord was saving him. Frustrated, Hiranyakasyapa asked Prahlada to show his Lord Vishnu on which Prahlad replied that he is everywhere. This further enraged Hiranyakasyapa and he knocked down a pillar and asked if Lord was present there.

Suddenly lord Vishnu, in a furious form having the body of a human and face of a lion, emergies from a pillar which was neither inside the house nor outside, at evening, which is neither night nor day. Hiranyakasyapa was killed by this Narsimha avatar!

This scene of Narasimha killing Hiranyakasyapa is beautifully depicted on a commemorative stamp of Jayadeva’s Geeta Govind. It has fine jewel-like colours with very fine details on it.

The fourth descendant of Hiranyakashyap, Bali, with devotion and penance was able to defeat Indra. This humbled the other deities and King Bali extended his authority over the three worlds. The gods appealed to Vishnu for protection and he descended as the dwarf Vamana. During a yajna of the king, Vamana approached him and Bali promised him for whatever he asked. Vamana asked for three paces of land. Bali agreed, and the dwarf then changed his size to that of a giant. He stepped over heaven in his first stride and the netherworld with the second.

Bali realized that Vamana was Vishnu incarnate. In deference, the king offered his head as the third place for Vamana to place his foot. The avatar did so and thus granted Bali immortality. Then in appreciation to Bali and his grandfather Prahlada, Vamana made him ruler of Pathala, the netherworld.

Vamana taught King Mahabali that pride should be abandoned for advancement in life, and that wealth should be appreciated as it can easily disappear. Hmmm… the moral is something which is applicable to us even today, isn’t it?

A commemorative stamp was issued which depicts a whole story of Vamana avatar on a tiny stamp.

Hidden behind every Avatara is a message/moral that is conveyed.  Dashavatara is not a topic of mere mythology but has serious inferences woven with it. The stories of Dashabatara open up a vast world of Indian belief system, culture and philosophy. Stay tuned and keep watching this space for next part of Incarnationas of Lord Vishnu on stamps!