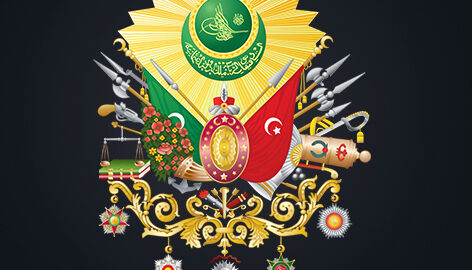 Ottoman Empire created by Turkish tribes in Anatolia (Asia Minor) that grew to be one of the most powerful states in the world. The Ottoman period spanned more than 600 years and came to an end only in 1922 when it was replaced by the Turkish Republic and various successor states in southeastern Europe and the Middle East. The term Ottoman is a dynastic appellation derived from Osman I (Arabic: ʿUthman), the nomadic Turkmen chief who founded both the dynasty and the empire about 1300. The original coinage of the Ottoman Empire consisted of small silver coins (akche, called asper by Europeans). Gold coins were not struck before the end of the 15th century; before and after that century, foreign gold, mainly the Venetian ducat, was used. A notable Ottoman innovation was the tughra, an elaborate monogram formed of the sultan’s name and titles, which occupies one side of the coin. Various European silver dollars also circulated extensively. 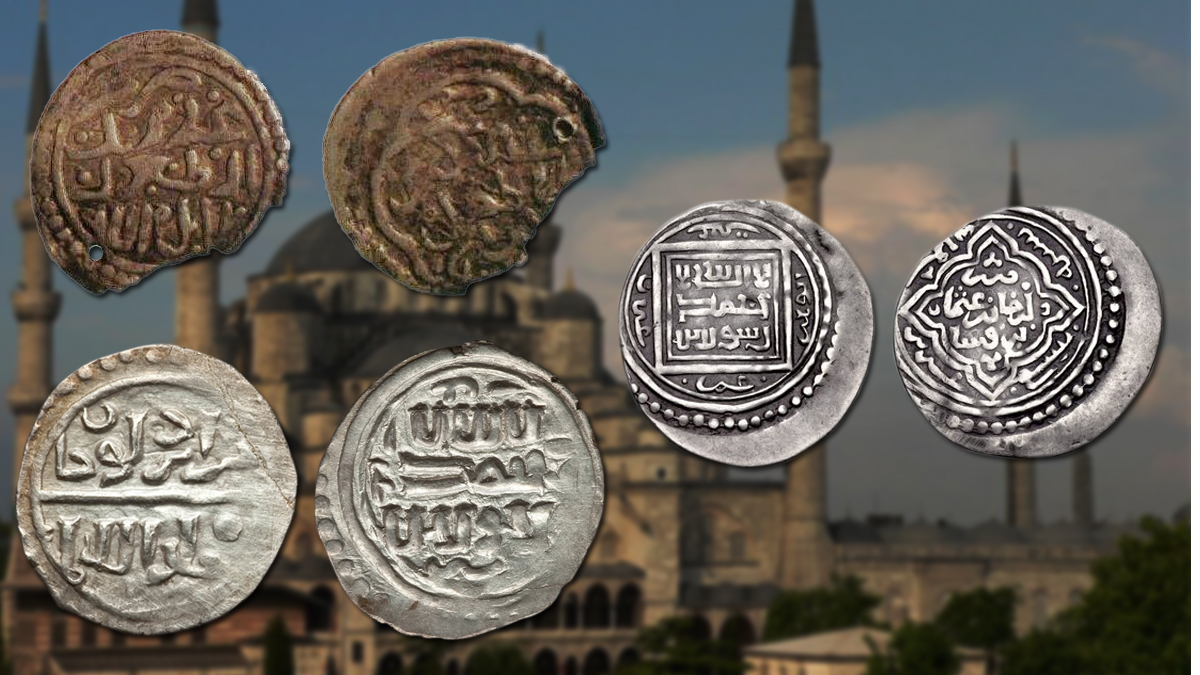 Osman- I – Father of the Ottoman Empire

Osman- I stand where myth and history meet. Starting as the chief of a small city in Anatolia, the master tactician soon expanded his empire throughout western Asia; at its height, it spanned three continents. His royal descendants ruled over modern-day Turkey for nearly seven centuries, from the Middle Ages until after the First World War.

The father of the Ottoman Empire Osman Gazi was born in 1258 in the town of Sogut. He was descended from the Kayi tribe of the Oguz Turkmen. His father was Ertugrul Gazi and his mother was Halyme Sultan. Osman Gazi was just 23 when he succeeded the leadership of the Kayi Clan in Sogut, in 1281.

According to Edward Gibbon, on 27th July in the year 1299, Osman I invades the territory of Nicomedia for the first time, usually considered to be the founding day of the Ottoman state. The activities and personality of Osman as the founder of the state and dynasty are highly appreciated by historians of both the past and the present. The state and the dynasty of rulers are named after him.

Coins minted during the reign of Osman I identify Ertugrul, leader of the Kayi tribe, as his father. The obverse of a coin reads “Osman bin Ertugrul bin Gunduz Alp”. .

Orhan Gazi was the second Bey (ruler) to rule the Ottoman Empire from 1324 to 1360 AD. He was born in Sogut, as the son of Osman Gazi (Founder of Ottoman Dynasty) and Malhun Hatun. His reign marked the beginning of an Ottoman expansion into the Balkans.

In the early stages of his reign, Orhan focused his energies on conquering most of northwestern Anatolia. The majority of these areas were under Byzantine rule and he won his first battle at Pelekanon against the Byzantine Emperor Andronikos III Palaiologos.

According to Numismatic evidence, the first silver ottoman coins were struck during the reign of Orhan Gazi. It was called aqche (Akce), which has the implied meaning of ‘white’ western source also refer to it as asper or aspre, from the Greek aspron. Aqcha remained the basic Ottoman unit and money of account up to it was replaced by the Ottoman qurush.

The obverse of a coin depicted the legend ‘Orkhan Khaldallah Mulkahu’ while, the reverse of a coin represents the Kalima and the name of Khalifa-e-Rashidoon around. This is an attractive piece in the series of Coinage of the Ottoman Empire.

Murad-I was the Ottoman Sultan from 1362 to 1389 AD. He conquered Adrianople, renamed it Edirne, and in 1363 made it the new capital of the Ottoman Sultanate. Murad’s reign witness rapid Ottoman expansion in Anatolia and the Balkans and the emergence of new forms of government and administration.

Murad-I ascended the throne in succession to his father, Orhan Gazi. He divided his sultanate into the two provinces of Anatolia (Asia Minor) and Rumelia (the Balkans). It was Murad who established the former Osmanli tribe into the sultanate. He recognized the title of sultan in 1383. 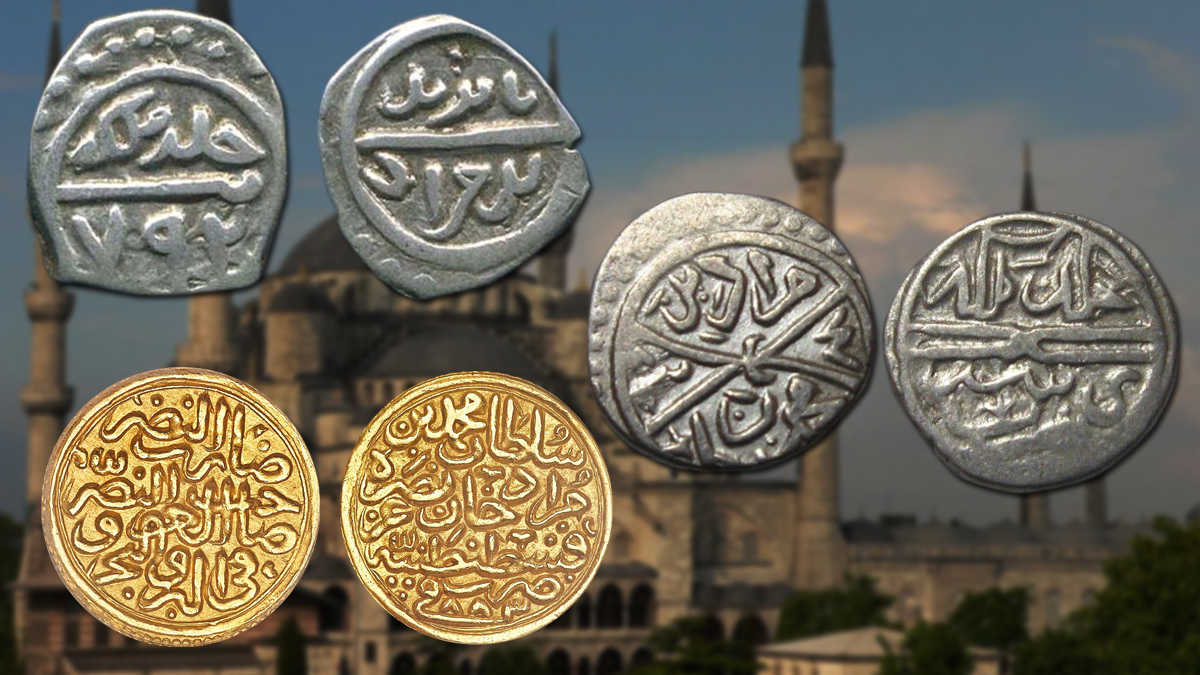 Bayezid I was the Ottoman Sultan from 1389 to 1402. He was the son of Murad I and Gulcicek Hatun. He built one of the largest armies in the known world at the time and unsuccessfully besieged Constantinople.

Bayezid adopted the title of Sultan-i Rum, Rum being an old Islamic name for the Roman Empire. He decisively defeated the Crusaders at Nicopolis (in modern Bulgaria) in 1396, and was himself defeated and captured by Timur at the Battle of Ankara.

To build a strong Islamic and Turkish base for his domain, Bayezid began to widen Ottoman suzerainty over the Turkish-Muslim rulers in Anatolia. He annexed various Turkmen emirates in Anatolia and defeated the Karaman emirate at Akcay (1397). These conquests brought Bayezid into conflict with the Central Asian conqueror Timur Tamerlane. In a confrontation between Bayezid and Timur in Cubukovas? near Ankara (July 1402), Bayezid was defeated; he died in captivity.

Depicted above is a silver coin issued under reign. The obverse of a coin depicts “Bayezid Bin Murad”. While the reverse of a coin inscribed with “Khallada mulkahu 792”.

Murad II was the Sultan of the Ottoman Empire reigning from 1421 to 1444 and again from 1446 to 1451. He expanded and consolidated Ottoman rule and helped lead the empire to recovery after its near demise at the hands of Timur following the Battle of Ankara (1402).

Murad was born in June 1404 to Sultan Mehmed I and his wife Emine Hatun. He was brought up in Amasya and ascended the throne on the death of his father. Murad II’s reign was marked by the long war he fought against the Christian feudal lords of the Balkans and the Turkish Beyliks in Anatolia, a conflict that lasted 25 years.

His silver Akce depicts the inscription ‘Sultan Murad Bin Muhammad Khan’ on its obverse face. On the other hand, the reverse of a coin engraved ‘Khuldallah Mulkahu’.

Mehmed II: also known as Mehmed the conqueror was a Sultan of the Ottoman Empire twice, first for a short time from 1444 to 1446, and later from 1451 to 1481. Mehmed is considered a hero in modern-day Turkey and parts of the wider Muslim world.

Mehmed II was born on 30th March 1432, in Edline, then the capital of the Ottoman State. He devoted himself to strengthening the Ottoman navy and made preparations for an attack on Constantinople. At the age of 21, he conquered Constantinople (modern-day Istanbul) and brought an end to the Byzantine Empire (Eastern Roman Empire). After the takeover, Mehmed moved his capital from Edirne to Constantinople. He extended the Ottoman control from southeastern Europe to the Danube and from Anatolia to the Euphrates River.

During the reign, he issued gold and silver coins in the denomination of Akce, Sultani, and Altun. The Altun omitted the religious formulas that had been standard until then, and instead gave the names and titles of the Sultan together with the date and the mint.

The above shown gold Sultani was issued during his second reign from Constantinople mint. The obverse of coins has legend ‘Sultan Mehmed Bin Murad Khan Fi 883 Azze nasruhu Qustantiniyah duribe. This coin is an impeccable specimen in the series of Coinage of the Ottoman Empire.

Throughout its more than 600 years of existence, the Ottoman Empire has left a profound legacy in the Middle East and Southeast Europe, as can be seen in the customs, culture, and cuisine of the various countries that were once part of its realm. In the above commentary, the six most important Ottoman Emperor’s coinages are discussed. This blog covers some of the beautiful aspects of Coinage of the Ottoman Empire.  Visit our Coin section for more detailed information.

Stay tuned for more of us fun and interesting articles!