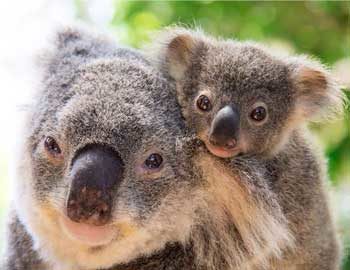 Animals, especially their young ones, are always fun to observe, be it in safaris or in documentaries or even on stamps! In 2001, Australia Post issued a set of 6 commemorative stamps featuring cartoons of “Australian Wild Babies on Stamps”. These stamps filled with cakes, sweets and cute baby animals depict a birthday party of Kevin, the koala bear!

This is definitely a very interesting and fun-filled way to get to know the wildlife and at the same time create interest in philately. So let’s look at these adorable Australian wild babies on stamps. 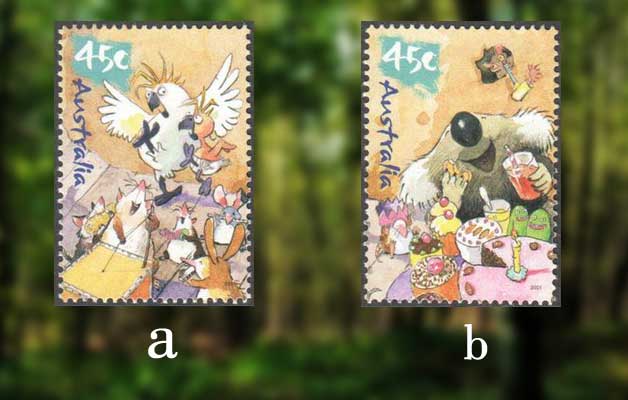 a) Screechy Cockatoos: The sulphur-crested cockatoo, which is a relatively large white cockatoo, is found in wooded habitats in Australia and some of the other islands. Cockatoos are recognisable by the showy crests and curved bills. Cockatoos prefer to eat seeds, tubers, corms, fruit, flowers and insects. They often feed in large flocks, particularly when ground-feeding.

This stamp shows a dad and son duo dancing to a band played by other animal musicians like the bilbies and the antechinus!

b) Cuddly Koalas: A koala bear is a herbivorous marsupial native to Australia only. It is easily recognisable by its stout, tailless body and large head with round, fluffy ears and large, spoon-shaped nose. Koalas are largely sedentary and sleep up to 20 hours a day. Being marsupials, koalas give birth to underdeveloped young that crawl into their mothers’ pouches, where they stay for the first six to seven months of their lives.

As opposed to their regular diet of plain gum leaves, we see here Kevin Koala, the birthday boy, enjoying a special birthday dinner on this 45c stamp! 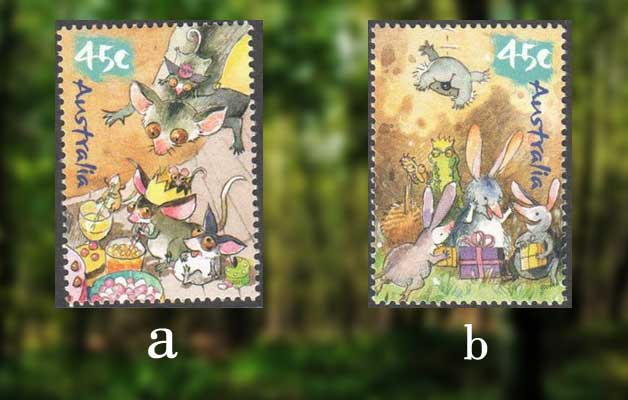 a) Awesome Possums: The opossum or possum is a marsupial native to Australia. Opossums are usually solitary and nomadic, staying in one area as long as food and water are easily available. Ring-tailed possums which are common to Australian urban areas are featured on a 45c commemorative stamp. Their unspecialized biology, flexible diet, and reproductive habits make them successful colonizers and survivors in diverse locations and conditions.

The stamp depicts adorable cute ring-tailed baby possums feasting on treats while a ring-tailed possum with a baby clinging to her back swings down to join the party!

b) Babbling Bilbies: Bilbies, or rabbit-bandicoots, are desert-dwelling marsupial omnivores found mostly in Australia. At the time of European colonisation of Australia, there were two species. The lesser bilby became extinct in the 1950s; the greater bilby survives but remains endangered. Its fur is usually grey or white, it has a long pointy nose and very long ears, hence earning its nickname, the rabbit-eared bandicoot.

Here we see a group of excited young bilbies crowded around gifts watched by an emu and a crocodile, while a young koala is seen free-falling in the background. 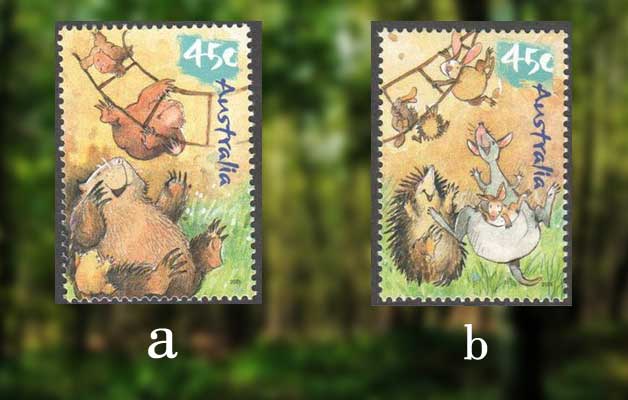 a) Wobbling Wombats: Wombats are short-legged, muscular quadrupedal marsupials who are native to Australia. Wombats are ground-dwelling animals and efficient burrowers. They are adaptable and habitat tolerant, and are found in forested, mountainous, and heathland areas of south-eastern Australia, including Tasmania. Wombats are herbivores; their diets consist mostly of grasses, sedges, herbs, bark, and roots.

These little balls of fur are seen depicted on a 45c stamp where a mama wombat is happily watching its joey climb a ladder.

b) Jumping Joeys: A wallaby is a small- or mid-sized macropod found in Australia, New Guinea and New Zealand. Wallabies are herbivores whose diet consists of a wide range of grasses, vegetables, leaves and other foliage. Due to recent urbanization, many wallabies now feed in rural and urban areas.

On this stamp we see a leaping mother wallaby, joey in pouch, encouraging her young wallaby as he climbs the ladder. Beside her, an echidna urges her baby on as he clings to the ladder beside a little platypus! What a party it must be!

Such catchy themes for stamps design are a sure way to attract the young audience to this dying hobby. Hope you guys enjoyed our Kevin’s Birthday party. Do you have these Australian Wild babies on stamps in your collection? Buy them here.

View all posts by Team Mintage World →
One thought on “Born to be Wild: Australian Wild Babies on Stamps!”