Gajalaxmi is a Laxmi with an elephant; it is one of the most significant Ashtalakshmi aspects of the Hindu goddess Lakshmi. Gajalaxmi can de define as the goddess seated on the lotus in padmasana yogic posture, flanked by two elephants (Gaja) on both sides. The elephants flanking her are shown as pouring water from their trunk over the goddess. In Hindu mythology, Laxmi is a representative of prosperity, good luck and abundance. Lakshmi is the Goddess of wealth, fortune, power, and beauty. She represents all that is female. That’s why many ancient goddess Lakshmi coins are issued by many rulers; it’s also the most common image in the numismatic continuity of Indian coinage. 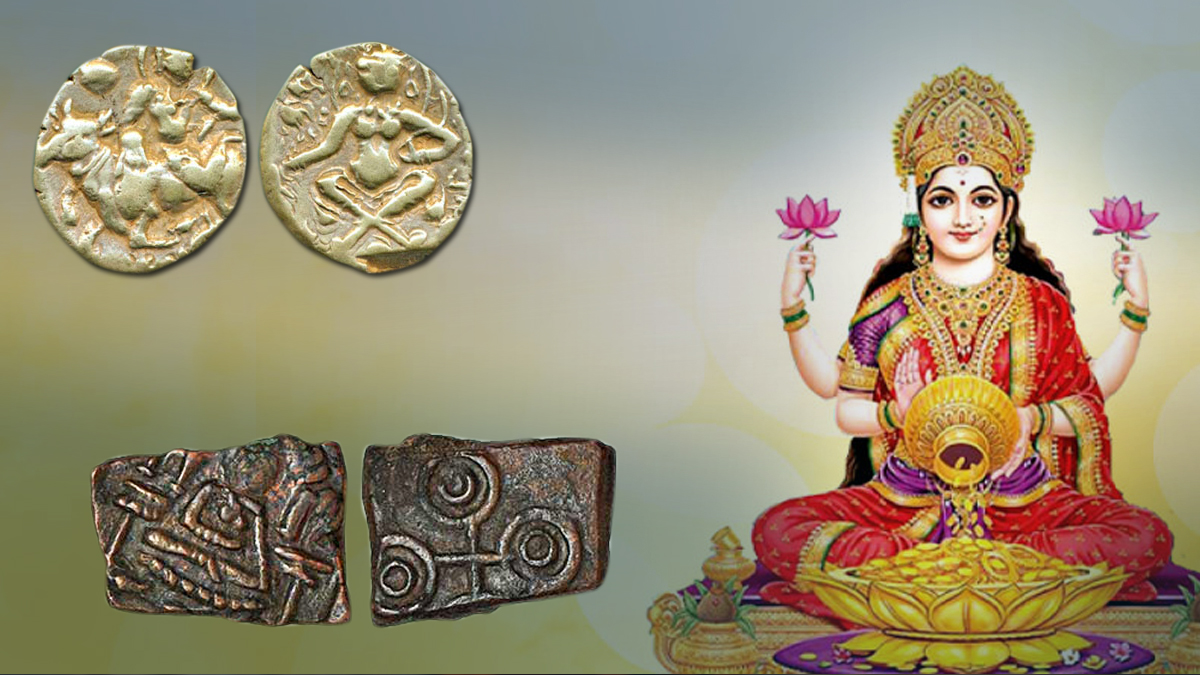 Samatata (c.450 CE to c.800 CE) was an ancient Indian region in South-Eastern Bengal. We find their earliest reference in the Allahabad Prashasti.

The Samatata Kingdom has come to light because of its numismatics evidence. Their coinage initially followed the design of the Kushanas and Guptas but they also show some distinct local features. This local design remained unchanged for a long period of time and now they are recognized as ‘Samatata coins’.

The coin featured in the image belongs to Sasanka (600-635 CE). He was the king of Gauda and his capital was at Karnasuvarna, near Murshidabad. The obverse of the coin depicts Shiva, nimbate, reclining on a couchant bull with his left hand upraised and Brahmi legend in the right field (off flan). The reverse has Goddess Lakshmi, seated on lotus and elephants pouring water over her head and Brahmi legend ‘Sri Sasanka’. It is a Base gold Dinar weighing 8.81 grams.

This copper coin; which weighs around 3.5g was issued by Ancient Malwa from the region of Ujjain. The obverse of this coin depicts ‘Gajalakshmi seated cross-legged in the centre, flanked by two elephants standing on lotuses. The two elephants hold water-pots in their trunks and lustrate the goddess. The reverse of this coin depicts the ‘Ujjain’ symbol with concentric circles as orbs.

Goddess Gajalakshmi has a significant place in Hindu mythology. In Hindu mythology, Laxmi is a representative of prosperity, good luck, and abundance that’s why ancient goddess Lakshmi coins are issued. 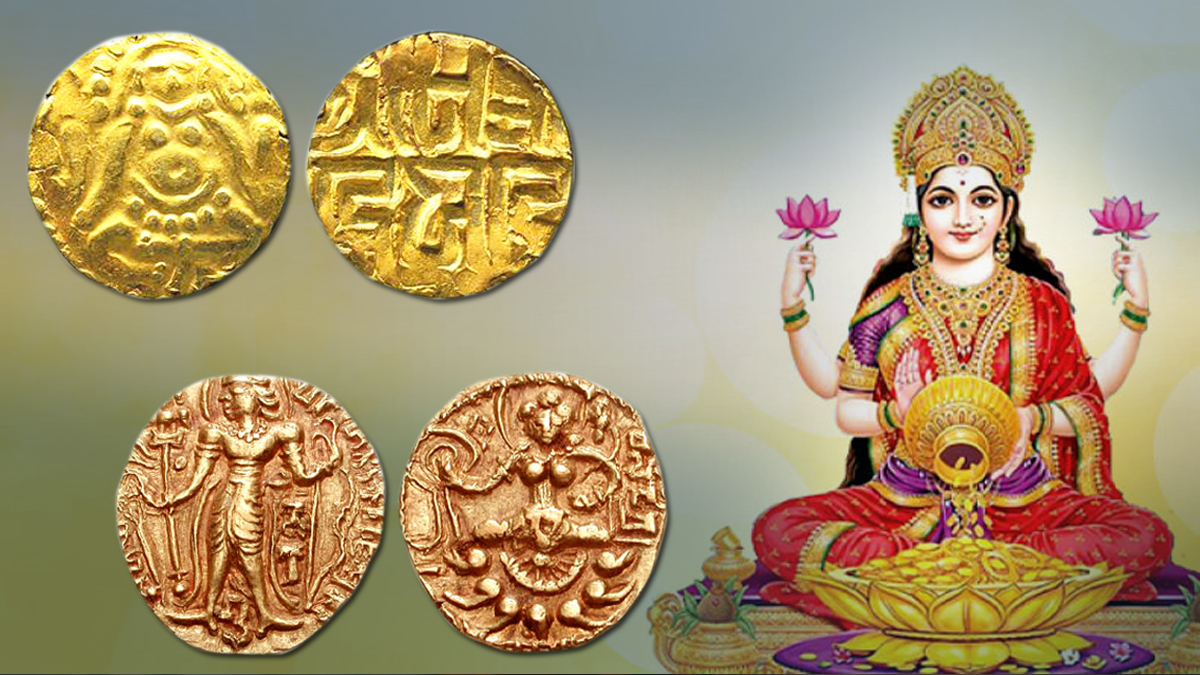 We find a number of gods and goddesses on old Indian coins like Shiv-Parvati, Saraswati, Vishnu-Lakshmi, Gaja Lakshmi, Lakshmi, Saraswati, etc. Indian kings used to issue such coinages to show their devotion

Muhammad bin sam had issued a Lakshmi type coin, in which legend “Sri Muhammad bin sam” is engraved in Devanagari on the obverse and Lakshmi on the reverse. This gold Dinar weighs around 4.2-4.5gm.

Muhammad bin Sam struck such ancient goddess Lakshmi coins which were in circulation. This type of coin is another example of numismatic continuity.

Gods and goddesses appear frequently on coins and seals of India. Depiction of any particular deity or symbol on a coin had a reason behind it. It can depend on the importance of the deities concerned and the popularity of their cult.

The earlier gold coins of Gupta were deeply influenced by the coinage of the later Kushanas. But eventually, the Gupta coinage show more superiority in their execution, and they are considered original in their style.

The coins depicted the ruling monarch on the obverse and carried legends with the figure of a goddess on the reverse side of the coin.

Almost every Gupta issued ancient goddess Lakshmi coins and an inscription on the reverse side. The goddess posed in either sitting or a standing position. There were many goddesses depicted in these coins. The most common was the image of Lakshmi, the Hindu goddess of good luck and prosperity.

Other dynasties like the Kalachurī ruler of Tripura, Gāṅgeyadeva, issued gold Indian coins depicting a four-armed Goddess Lakshmi on one side and his name in Nagari on the other. The goddess sits cross-legged holding a lotus in the two upper hands.