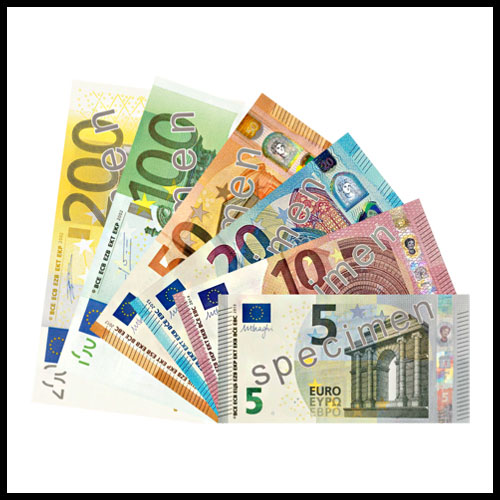 The European Central Bank recently announced that a total of 3,989,900,000 notes were printed, worth almost €386 billion in 2018. No €10 and €50 notes were printed. The bank has ended the production of €500 notes. These notes are still legal tender but are being withdrawn from circulation. €100 notes took the first spot in terms of the number of notes issued. A total, 2,300,0000 €100 notes were printed for central banks of Germany, Spain, France, Italy, Latvia, Lithuania, and Austria. €200 notes took the second spot with 715 million notes that were printed for the central banks of France, Italy, and Austria. €20 notes came third with 526.5 million notes that were printed for Belgium, Ireland, Spain, and Portugal. And finally, a total of 448,400,000 €5 notes were issued for Estonia, Greece, Cyprus, Luxembourg, Malta, the Netherlands, Slovenia, Slovakia, and Finland. Euro banknotes are issued for government-owned and private printing facilities approved by the European Central Bank and every national bank bears the printing cost.

The first letter in the serial number on the reverse side points to the national bank that issued the note. However, the notes could be printed elsewhere too. Z stands for Belgium; Y for Greece; R for Germany; V for Spain; U for France; T for Ireland; S for Italy; C for Latvia; B for Lithuania; none for Luxembourg; P for Netherlands; N for Austria; M for Portugal; L for Finland; H for Slovenia; E for Slovakia; G for Cyprus; F for Malta; and D for Estonia.

The printer code is specified on different locations on the obverse as per the denomination. It is included as the first letter in a six-character code. The code and serial number are mostly the same if it was printed by a facility that’s owned by the national bank. Other printer codes include the letters D for Polska Wytwórnia Papierów Warto?ciowych, Warsaw, Poland; E for Oberthur Fiduciaire, Chantepie, France; H for De La Rue, Loughton, United Kingdom; J for De La Rue, Gateshead, United Kingdom; W for Giesecke & Devrient GmbH, Leipzig, Germany; and X for Giesecke & Devrient GmbH, Munich, Germany.