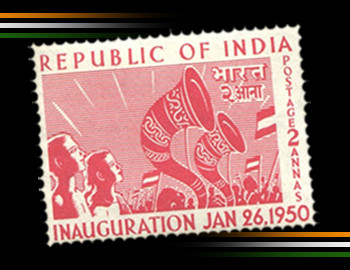 “On what rests the hope of the republic? One country, one language, one flag!” – Alexander Henry. One language??? Even though India is a country where exists many languages, she is one of the biggest republics in the world and is represented by one of the most incredible of flags. A National Flag is a symbol of national pride which represents hopes and aspirations of the people of a nation. Tiranga: the Indian Tricolour means a lot to the people of India and has a great significance and honour to the Indian public. This treasured possession of the Indians appears on countless stamps. On this Republic Day let us skim through our collections and see how many countries feature our Tiranga on Stamps.

A flag becomes an identity of a nation. Any independent country, hence, needs a flag to personify itself. The National Flag of India was first adopted in its present form on 22nd of July in 1947, few days before the independence of the country from British rule. It was designed by Pingali Venkayya using three colours, Ashok Chakra and Khadi cloth. Before the final adoption of the national flag, it went through various amazing changes since its first inception. It started with searching for a unique national flag to recognise the country during the national struggle for freedom from the British rule.

The first national flag of India is said to have been hoisted on August 7, 1906. The flag composed of three horizontal stripes of Green, yellow and red. The red strip had two symbols, one of sun and the other of a star and a crescent. The yellow strip had ‘Vande Mataram’ written on it in Devnagiri script.

Then came the Madam Bhikaji Rustom Cama’s flag. This was very similar to the first flag except that the top strip had seven stars denoting the Saptarishi. This flag was also exhibited at a socialist conference in Berlin.

The third flag went up in 1917 when our political struggle had taken a definite turn. Dr Annie Besant and Lokmanya Tilak hoisted it during the Home rule movement. This flag had five red and four green horizontal strips arranged alternately, with seven stars in the saptarishi configuration on them. In the left-hand top corner, the Union Jack is seen along with a white crescent and star in one corner. 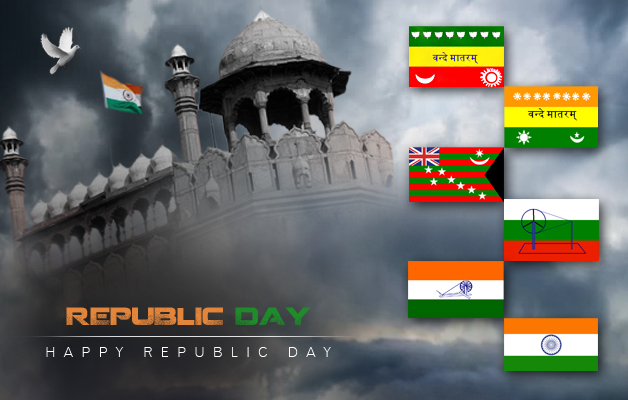 In 1921 at Vijaywada, an Andhra youth, Pingali Venkayya prepared a flag which was made up of two colours red and green representing the two major communities i.e. Hindus and Muslims. Mahatma Gandhi made further changes by adding a white strip to represent the remaining communities of India and the spinning wheel to symbolise progress of the Nation.

The year 1931 was a landmark in the history of the flag. A resolution was passed adopting the tricolour as our national flag. This flag bore saffron, white and green stripes with Mahatma Gandhi’s spinning wheel at the centre.

Finally, on July 22, 1947, the Constituent Assembly adopted this design as Flag of the Free Nation of India. The colours and their significance remained the same. Only the Dharma Charkha of Emperor Asoka was adopted in place of the spinning wheel as the emblem on the flag. Thus, this tricolour eventually became the flag of Independent India.

The colours of “Tiranga” denote certain significance. Saffron colour indicates the strength and courage of the country, the white indicates peace and truth while the green shows the fertility, growth and auspiciousness of the land. Furthermore, this Dharma Chakra depicted as the “wheel of the law” intends to show that there is life in movement and death in stagnation.

The “Tiranga” was proudly hoisted on 15th August 1947 as the symbol of freedom and the identity of this newly born nation. When India won her Independence, the Indian government had to deal with a lot of problems; starting from the refugees to handling people’s mail. The postal system was already in place, though the stamps had to be re-designed and re-printed by the Indian Government.

And the obvious choice for this auspicious new beginning was our Tiranga! This is how the tradition of depicting Indian tiranga on stamps began. It was printed on 21 Nov. 1947 at Indian Security Press in Nasik. It features the words “Jai Hind” and has a face value of 3.5 annas.

Another peculiar issue by India Post came in the year of 1962. Commemorating one of the most special days, this stamp was issued on the Birth Anniversary of the first Prime Minister of India i.e. Pt. Jawaharlal Nehru. The day 14th November is also celebrated as Bal Din – Children’s Day in India. India Post issues special stamps to celebrate this day every year. As Pt. Nehru believed that the future of a country depends on its youth, this stamp conveys his sentiments beautifully. This 15 paise Children’s Day stamp issued in 1962 shows the Indian flag being passed on to the hands of a young child.

Being a democratic Republic, India has played many crucial roles in the world politics. The International Day of Solidarity with the Palestinian People was one such important role that India played during post-Independence Era. After independence, India, on innumerable occasions, supported the Zionist Movement and gave recognition to the state of Israel. An INR1.00 Stamp issued in Nov 1981 is a solid enough proof of the bond of solidarity between the two nations. Designed by Badar Makhmoor, this stamp shows the flags of both India and Palestine Liberation Organisation.

Fluttering proudly is our Tiranga on stamp issued to commemorate the 1st Summit of SAARC (South Asian Association for Regional Cooperation). This Rs. 3.00 stamp features the flags of the member countries with Tiranga in the centre.

On the occasion of the 25th Anniversary of the Country’s Independence, the Posts and Telegraphs Department paid its humble tributes to all those who valiantly struggled for independence and to those who toiled ceaselessly in various spheres of activity for achieved self-sufficiency in various fields. The postage stamp brought out on this occasion depicts the people celebrating Independence Day by holding high the National Flag of India in front of Parliament.

On the other hand, a stamp that was issued to commemorate the 40th anniversary of the Independence of India features National Flag, symbolising the nation’s unity and integrity, and the word ‘forty’ in national colours with birds indicating the flow of time. Their upward flight connotes the soaring aspiration of our Nation.

Flag of a nation is not just a witness of its present but is a memory of its history. The Indian Tricolour is a touching eyewitness of the freedom struggle and the efforts taken by countless patriots to achieve that dream. Tiranga is hoisted in the name of these martyrs. The Posts & Telegraphs Department brought out yet another commemorative postage stamp to pay their homage to the martyrs. The National Flag in the form of the rising Sun represents political freedom from the dark night of foreign domination. The flame symbolises the indomitable spirit of the millions of our men and women who laid down their lives for the country’s freedom.

It is a proud moment for any nation when its own flag waves on a foreign land. It is an acknowledgement that a nation gets internationally. Tiranga: the Indian Tricolour is given the rightful honour by the world. It is not just hoisted on the embassies but is also featured on several philatelic issues.

South Korea is the first foreign country to bring out stamps depicting the Indian National Flag. A 500 won stamp was one of the stamps among the series of Countries Participating in the Korean War which was issued in 1951. India sent an Army Medical Mission for the “UN Peace Keeping Force” in the Korean War. The stamp features Globe with doves as a sign of treaties flanked by the Indian Flag on the left and the Flag of South Korea on the right. 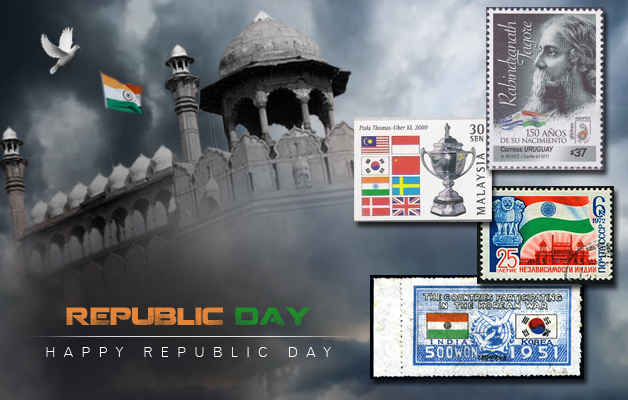 Of all the countries in the world; India, during post-World War times, had developed good relation with USSR. To celebrate the Indo – Soviet relation, Post USSR issued a 6 krona stamp in 1972 that features State flags of the USSR and India, the  Rashtrapati Bhavan in New Delhi, the National emblem of India and in the background Tiranga fluttering gloriously.

A number of factors contribute in strengthening a friendship bond between two nations. It may be history or art or a common social cause. Among all, ‘sports’ is considered to be a major factor that holds two nations together. Amidst the glow of a glittering trophy, sports create an unbreakable connection. Badminton is one of the popular sports in India. Malaysia in the year 2000 issued a 30 sen stamp featuring eight flags of countries participating in the final round. Tiranga is one of them.

India is celebrating its 67th Republic Day honouring the day in 1950 when it adopted its current constitution. India has developed a lot since then. India is now a nuclear capable country with the second largest standing army in the world. India is the third largest economy in the world based on the nominal GDP and also the fastest growing major economy. In the field of technology, India has achieved a great deal of success. We are one of the few countries who has hoisted our flag on the moon and after our successful mission to mars, we now look forward raise Tiranga on the Mars as well.

Happy Republic Day to all the proud Indians!