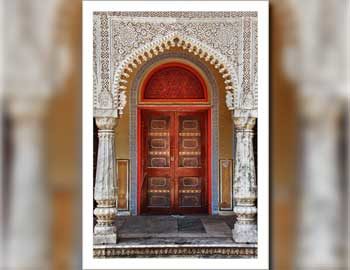 Behind every door, there’s a legend! Have you ever walked past a door and wondered briefly, what lies beyond? Door brings back the idea of stories that have remained untold. It depicts not only aesthetic beauty but also the architecture style and cultural richness. In this blog, we will see the stories of prominent doors through stamps.

There is a list of iconic gates in India such as Buland Darwaza, Baroda Palace Gate, Vittala Gate at Hampi, Ganesh Gate of Amer Fort, Swaminarayan Mandir gate and Massive Gates of Kumbhalgarh Fort Ranthambore Fort, and Big Gateway of Bidar Fort, etc. But there very few which are illustrated on stamps. Today we have brought for you 6 traditional Stories of prominent doors through stamps. Have a look! 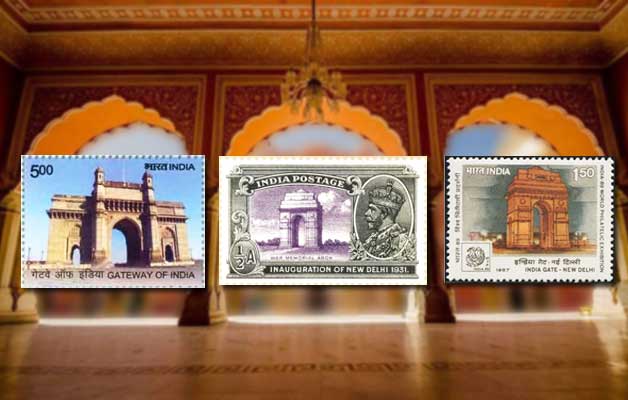 Mumbai’s most valued structure – Gateway of India was inaugurated on 4th December 1924. It was built to commemorate the visit of King George V and Queen Mary to Mumbai. This monument not only welcomed the British authority to India but also was the witness to the departure of British rule India. It also is a witness to the changing ways of the city. Hence, the gateway of India has become synonymous to the word Mumbai.

This most valued icon of Mumbai is commemorated in various ways. – The British Government issued a ½ Anna postage stamp in 1935 celebrating the Silver Jubilee of the reign of King George V, which has the image of the monument in center and portrait of the King on Right.

In 1954 Rs. 5000 currency was issued Government of India which acknowledges Hindi as the National Language of India.

The Gateway of India reappears on a postage issue in 1998. A set of two stamps with face values 5 and 6 Rs respectively was issued to mark the 50th anniversary of Air India’s first Bombay-London flight. Rs. 6 stamp features Gateway of India in right and the mascot of Air India on the Globe on left.

Located in the heart of the city of New Delhi, the India Gate is one of the most prominent national landmarks of India. The foundation stone of India Gate was laid in 1920 and the structure was unveiled in 1933. It was designed by Sir Edwin Lutyens.

India gate is a 42-meter tall gate that is regarded as All India War Memorial. It commemorates the 70,000 Indian soldiers who lost their lives fighting for the British Army during the World War I. The memorial bears the names of more than 13,516 British and Indian soldiers killed in the Northwestern Frontier in the Afghan war of 1919.

In 1972, following the Bangladesh Liberation War, a small simple structure, consisting of a black marble plinth, with a reversed rifle, capped by a war helmet, bounded by four eternal flames, was built beneath the soaring Memorial Archway. This structure called Amar Jawan Jyoti. 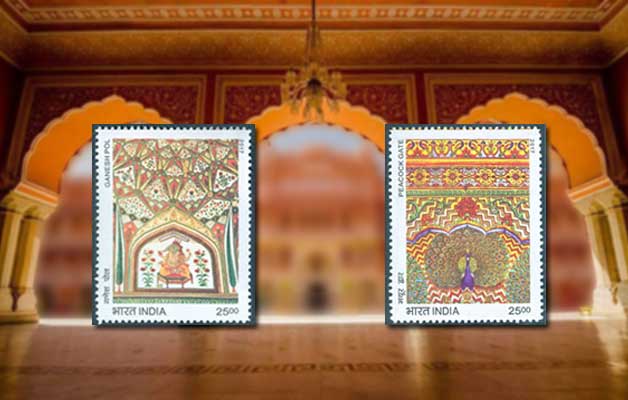 Situated in the heart of the city of Jaipur, City Palace is one of the most famous places in the Pink city. The name itself explains the glory of the place. It shows the fusion of Mughal and Rajasthani royal architecture and the traditions of the royal families.

Pritam Niwas Chowk, the inner courtyard of the city palace has four beautiful gateways. Each gate is adorned with themes representing the four seasons and Hindu gods. Peacock Gate is one of the four gates which provide access to the Chandra Mahal. It is ornamented with motifs of peacocks, representing autumn and has a small idol of Lord Vishnu on its lintel.
It’s extremely beautiful and colorful with a riot of green and blue colors and is surely a delight to watch for all the visitors. Beautifully designed and painted the three-dimensional peacocks engraved out of the gate ceiling are carved on this gate so skillfully that it will leave you spellbound.

To commemorate this beautiful piece of architecture, India post has issued 2 Rupee 50 Paisa stamp in 2017.

The Ganesh Pol or Gate is one of the most beautiful and marvelous entrances in the Amber Fort. Built under the order of Mirza Raja Jai Singh, it is covered with elaborate frescoes and a Ganesh painted above the gate, symbolizing good luck. Ganesh Pol leads to scenic lawns of Mughal Garden in Amber Palace.

Graceful and majestic, the Ganesh Pol Gateway is named after the famous Hindu deity Lord Ganesh. This gateway is the entry to the private palaces of the Maharajas. The Pinnacle of the gateway has a stunning shelter or Chattri and there are two domes one on both side of the canopy.

Tourists from all over the world admire the architecture of the gateway. It shows a fusion of Mughal and Rajput architectural styles. The gate is covered with delicate frescos and mosaics and set with finely carved lattice screens. 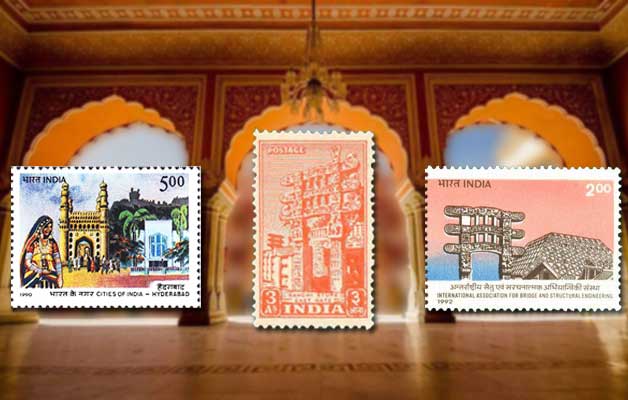 Situated bang in the heart of the old city of Hyderabad, the Charminar is one of the most recognized monuments in India. It was constructed in 1591 by the fifth ruler of the Qutb Shahi dynasty, Muhammad Quli Qutub Shah.

The Charminar was constructed at the intersection of the historical trade route that connects the markets of Golkonda with the port city of Machilipatnam. The structure is a fine example of Indo-Islamic architecture with ample Persian influences.

Qutb Shah was also among the early poets of Dakhani Urdu. While laying the foundation of Charminar, he performed the prayers in Dakhini couplets, which are recorded as follows:

Fill this city of mine with people as,
You filled the river with fishes O Lord.

It is listed as an archaeological and architectural treasure on the official “List of Monuments” prepared by the Archaeological Survey of India.

Also as a tribute to the city’s most iconic architecture, Indian post has issued 500 Paisa (5 Rupee) commemorative postage stamp in 1990.

In India, there are many other doors which tell the story of the joys, sorrow, and laughter.

The movement we hear Sanchi Stupa, our mind goes back to 300 BCE to Ashokan period. Considered as one of the most important Buddhist monuments, The Great Sanchi Stupa reflects the gems of Buddhist art and architecture.

The gateway decoration of the great Stupa at Sanchi beautifully portrays the Jataka tales and Buddha’s life story in its panels. It is surrounded by four gateways which are popularly called Toranas and named as northern, southern, eastern, and western. The northern gateway is crowned by a wheel of law and showcases all the miracles connected to Buddha that are mentioned in the Jatakas. The Southern Gateway has carvings that showcase the birth of Gautama Buddha.

Eastern gateway shows the dream of Maya and it also displays the incident when Gautama left the palace for his enlightenment. The Western Gateway displays the seven incarnations of Lord Buddha.

India Postal Department has issued a stamp on Sanchi Stupa Gateways, having the face value of 3 Anna.

If you have time to spare and are keen to let your eyes feast on this architectural grandeur, do visit these beautiful doors of India to dig out stories behind it. More Stories of prominent doors through stamps will be covered in a separate post, coming up soon. Till then stay tuned.