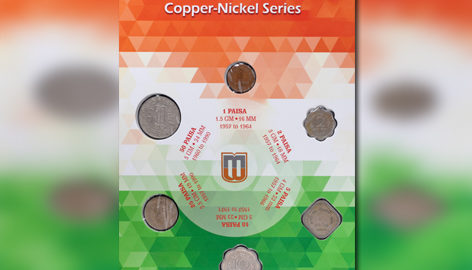 India’s financial evolution is as intriguing as her glorious past! Starting from the ancient Punch Marked Coins to the current facade of the Ashokan Lion capital (National Emblem), Indian currency has undergone great changes in its designs and metals. But interestingly, the terms Rupiya and Paisa, have survived the changing kings and their titles. They have stuck through the ages and led to the official terminology of the modern Indian Currency. In this blog let’s explore the story of the Republic India Coinage! 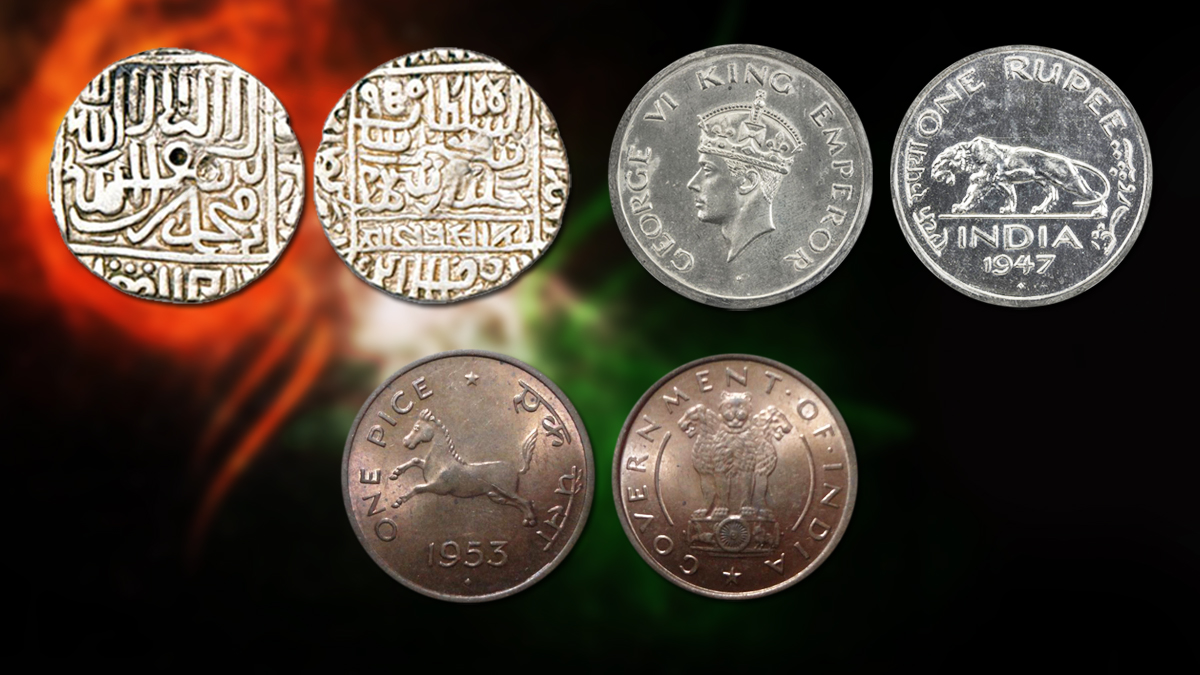 Did you know that the term “Rupiya” was first introduced in 16th century CE by Sher Shah Suri? The term “Rupiya” had its origins in the Sanskrit word “rupya” meaning wrought silver or a silver coin. The name and the monetary system remained unchanged during the Mughal and the colonial period.

After gaining independence from the British Empire on 15th of August 1947, India retained the monetary system and the coinage that existed. During the transition period from a colony to an Independent nation, the Frozen Series of 1947-1950 was used as a stop-gap measure. The coins and currency continued to portray the King and had the tiger on it.

Introduced on 15th August, 1950, Anna Series became the country’s first coin series with 16 Annas (or 64 Pices) constituting to 1 Rupee. The King’s Portrait was replaced by the Lion Capital of the Ashokan Pillar and a corn sheaf replaced the Tiger on the one Rupee coin. In some ways this symbolised a shift in focus to progress and prosperity. Indian motifs were incorporated on other coins too.

As the years passed, India went on to mint series of coins, experimenting with different denominations and metals.

By the Indian Coinage (Amendment) Act of 1955 India shifted to the “Decimal System”, according to which new ‘decimal series’ was introduced in 1957. The rupee was now divided into 100 paisa instead of 16 annas. These newly introduced coins were initially struck with the words “Naya Paisa” to distinguish them from the previous coins, but the word “Naya” was dropped from 1964.

Issued in the fractions of 1, 2, 5, 10 and 20 paisa, the coins of the decimal series were struck in the alloys of Bronze, Nickle-Brass, Cupronickel and Aluminium-Bronze. The coins were issued in different shapes like: round, rhombus and scalloped. A steady increase in pricing gradually led these coins to be minted only in Aluminium from 1964 and these new Aluminium series dropped the word “naya” from it.

The Aluminium Series had coins in denominations of 1, 2, 3, 5, 10, and 20 paisa, each having alluring shapes as rhombus, scallops and hexagons. New hexagonal coins of 3 and 20 paisa that were introduced did not gain much popularity and hence were slowly phased out of circulation. Further the 5 paisa coins were struck in two reverse (legends “rupaye ka biswa bhag” and “5 piase”) and one obverse (added legend “Satyameva Jayate” under the Lion Capital) variety.

Later a new metal was introduced and we soon had Ferritic Stainless Steel coins of 10, 25 and 50 paise introduced in 1988 and of one rupee in 1992. Due to a considerable decline in demand for the coins of lower denominations and an increase in metal costs, circulation of lower denomination coins was reduced and the Government of India in consultation with the Reserve Bank of India decided to mint all denomination coins in ferritic stainless steel in 2006.

In 2005 Reserve Bank of India (RBI) introduced a rupee 10 coin, making it the highest-denomination coin minted in India. These newly struck coins were unique in their bi-metallic composition and have an aluminium-bronze outer ring and a copper-nickel core.

The 21st century witnessed many new varieties of definitive coinage that were put into circulation. New and innovative designs that depicted the rich culture and ever dynamic diversity of India were introduced through themes like: Unity in Diversity, Nritya Mudra, and Connectivity and Information Technology.

Today there are a total of 5 denominations of coins in circulation: 50 paise, 1 rupee, 2 rupees, 5 rupees and the relatively new, 10 rupees. The Government of India has the sole right to mint coins and the coins are issued for circulation only through the Reserve Bank in terms of the RBI Act.

Did you know, in accordance with the Coinage Act of 1906, coins can be issued up to the denomination of Rs.1000! And we have had commemorative coins of such high and odd denominations, but such coins are not put in general circulation.

Well you see, a coin is not just a legal tender or a form of money but it can also be a great platform to celebrate some special occasions or to honour and pay respect to those who have done great things for the world and the people who have made this country. It is one of the ways to pay homage to their contribution. Indian or not every personality depicted on an Indian coin has a distinctive connection with India. 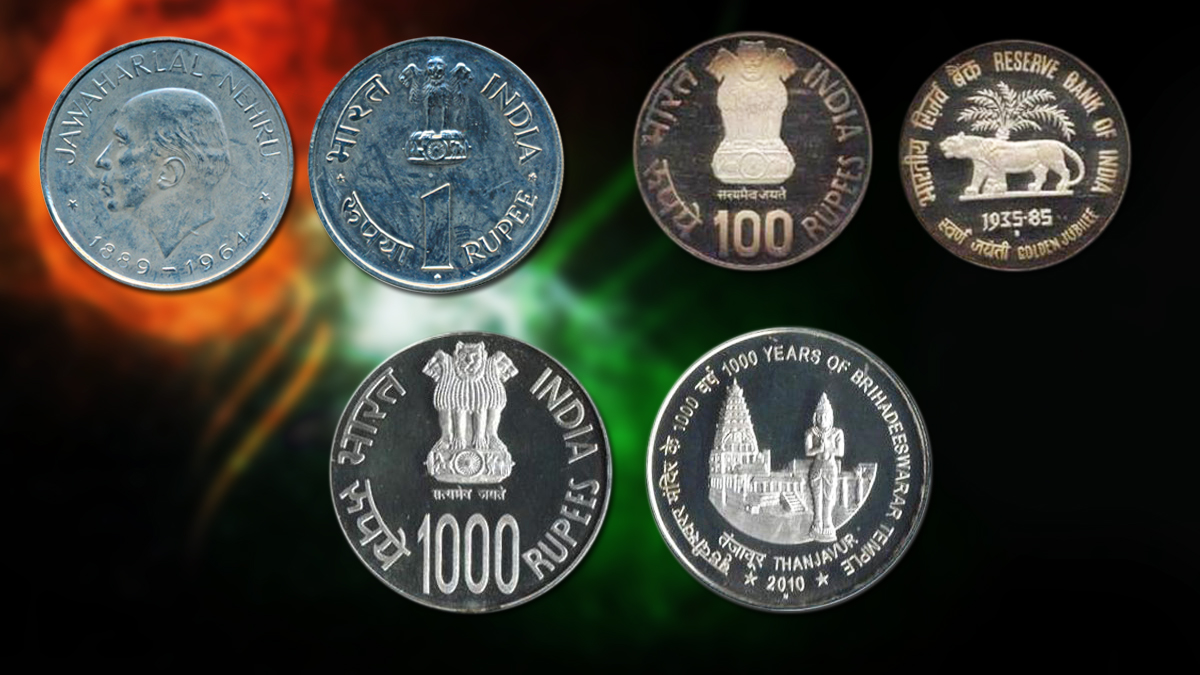 The Commemorative coins make great collectibles. Issued in limited quantity over a limited period, these coins are collected by both amateur and experienced collectors with equal enthusiasm! Do you have any in your collection?

Coins in India have evolved over the ages. Going from being struck with single punches, metal has been cast into coins, die-struck, and have been minted in repoussé. From using precious metals such as gold and silver, coinage has evolved to a point where people use token currency in the form of stainless steel coins, paper money, and even plastic and digital currency. As economies of the world are changing features and shapes, money is also changing itself. Globalization and expansion of e-commerce have given new dimension to the modes of payment.

Money is more complicated today than it has ever been in the past. The people who struck the first coins probably never imagined how money would evolve over time. This makes one wonder how money will evolve in the future. What next after digital currency?

DISCLAIMER: We do not own/claim the copyrights for any of the coin images used.