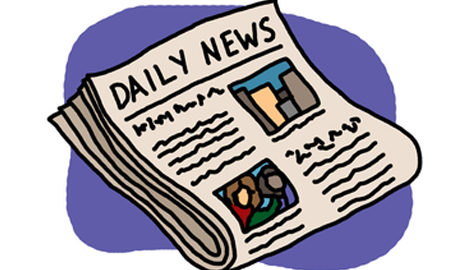 Sunday Morning! A cup of steaming tea and freshly delivered newspaper! This was, once, an ideal morning scene in many households. As the headlines were read, all the exhausting mornings of the week were forgotten. There was a time when news came from three sources Akashvani, Doordarshan, and Newspaper. A newspaper was the most favorite! As appose to the endless noise of Electronic Media Newspapers – the Quiet Voice of India truly came with a solace. Today the newspaper in India is a proud institution of our society with the function of information, education, and entertainment. It can be defined as a printed means of conveying current information. In this world of pace and voices, the Newspapers are the silent observers and have become the Quiet Voice of India.

The first newspaper of India was published on 29 January 1780 by James Augustus Hicky under the British Raj and its name was ‘The Bengal Gazette’. It was also called ‘Calcutta General Advertiser’ and people simply remember it as ‘Hicky’s Gazette’. The idea of printing a newspaper in India had been floated twelve years earlier by the Dutch Adventurer William Bolts, but Hicky was the first to execute the concept. Hicky’s newspaper was printed once a week on Saturday. Hicky’s Bengal Gazette was the first English-language newspaper and the first printed newspaper to be published in both the Indian sub-continent and in Asia. The newspaper became famous not only among the British soldiers posted in India at that time but also inspired Indians to write newspapers of their own.

From now on there was no stopping. The newspapers have evolved from a sheet of paper filled with advertisements to a connection between the people and the world. By the late 19th century the newspapers have become a strong medium to express nationalist thought process. The blog Newspapers – the Quiet Voice of India covers Newspapers published in India in native languages that have appeared on stamps. The Newspapers are broadly classified as the Newspaper Published in the Pre-Independence era and Post-Independence Era. 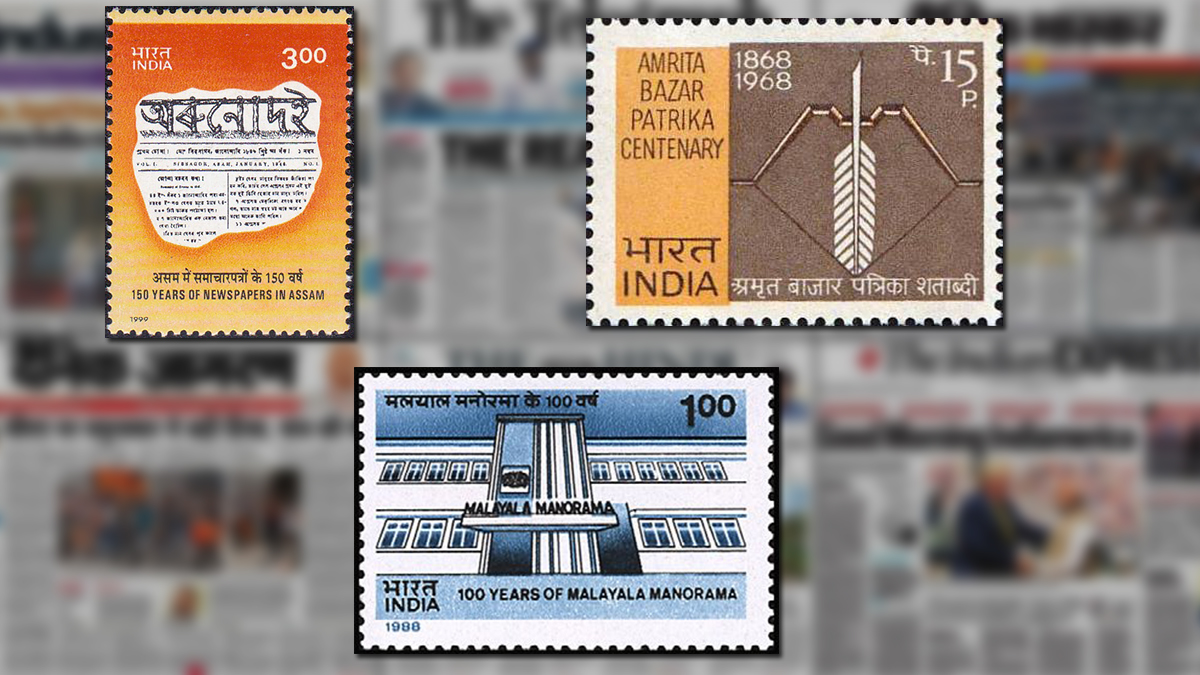 The first Indian newspaper is commonly mistaken to be Amrita Bazaar Patrika. However, the First Indian Newspaper in the native language is the Assamese Newspaper cum Magazine Orunodoi. The advent of British in Assam ushered in, among things, the printing press and Assam saw the light of its first-ever newspaper and it was published by Christian Missionaries. The tag line of the newsmagazine was “The Orunodoi, monthly paper, devoted to religion, science and general intelligence”. To commemorate the 150th Years of Newspapers in Assam, India Post issued an Rs.3 stamp in the year 1999 which depicts the front page of the newspaper on the bright background of orange and yellow which resembles the rising sun.

Following the Assamese Newspaper, India witnessed her next newspaper. By the late 19th century, political leaders and social reformers were taking active participation in journalism. One of the renowned newspapers that focused on these leaders and social reformers was “Amrita Bazar Patrika”, established in 1868. Perhaps it is one of the reasons among many others for the government to pass the ‘Vernacular Press Act’ in 1876. On the Centenary of the publishing of the newspaper, India Post issued a 15 paise commemorative stamp. 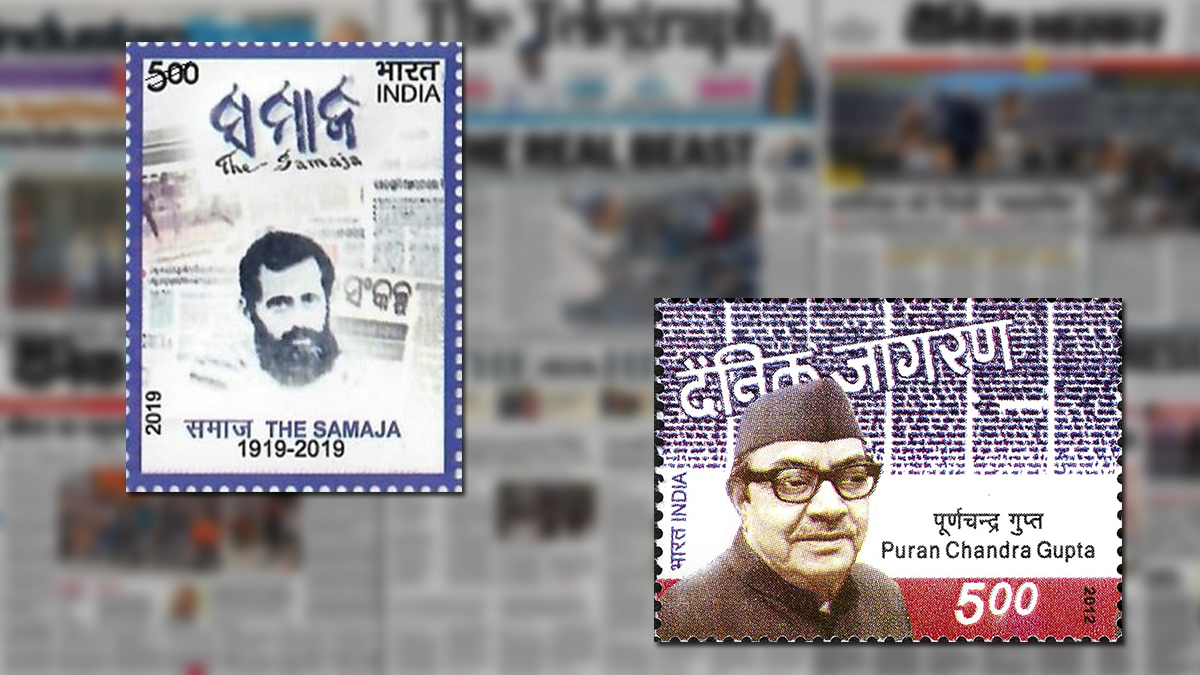 As India entered the new millennium, she witnessed the rise of Indian Nationalism. With the establishment of the Indian National Congress in 1885, the Indian nationalist spirit was awakening and Newspapers became the Quiet Voice of India. Newspapers like Young India, Harijan, Kesari, Maratha, etc. were rooting through Indian Society. Setting such newspapers as an example, many newspapers were being printed in various vernacular languages.

One of them is an Odia daily newspaper – the Samaja. Published in Cuttack, Odisha, the newspaper started in the year 1919. Gopabandhu Das, a prominent freedom fighter and social worker started it as a weekly from Satyabadi in Puri district of Odisha to facilitate the freedom struggle and to revive the moribund Odia language. Under his leadership, and with the support of local people, the paper grew into prominence. The newspaper celebrated its centenary in the year 2019 with a special commemorative stamp worth Rs.5. The stamp depicts the front page of the newspaper in the background with an effigy of its founder – Gopabandhu Das.

The year when the freedom struggle of India reached its crescendo and found expression in the “Quit India movement”, Dainik Jagran was launched. One of the last newspapers published during the pre-independence era of India Dainik Jagran. With the meaning Daily Awakening, the newspaper is an Indian Hindi language daily newspaper. The newspaper was launched with the vision of the revolutionary freedom fighter, Late Shri Puran Chandra Gupta that would reflect the free voice of the people. As of 2017, it was the largest newspaper in India by circulation and the 17th most read in the world in the year 2010. In the year 2012, the newspaper completed its 70th year which was celebrated by Indian Post with an Rs. 5 stamp. 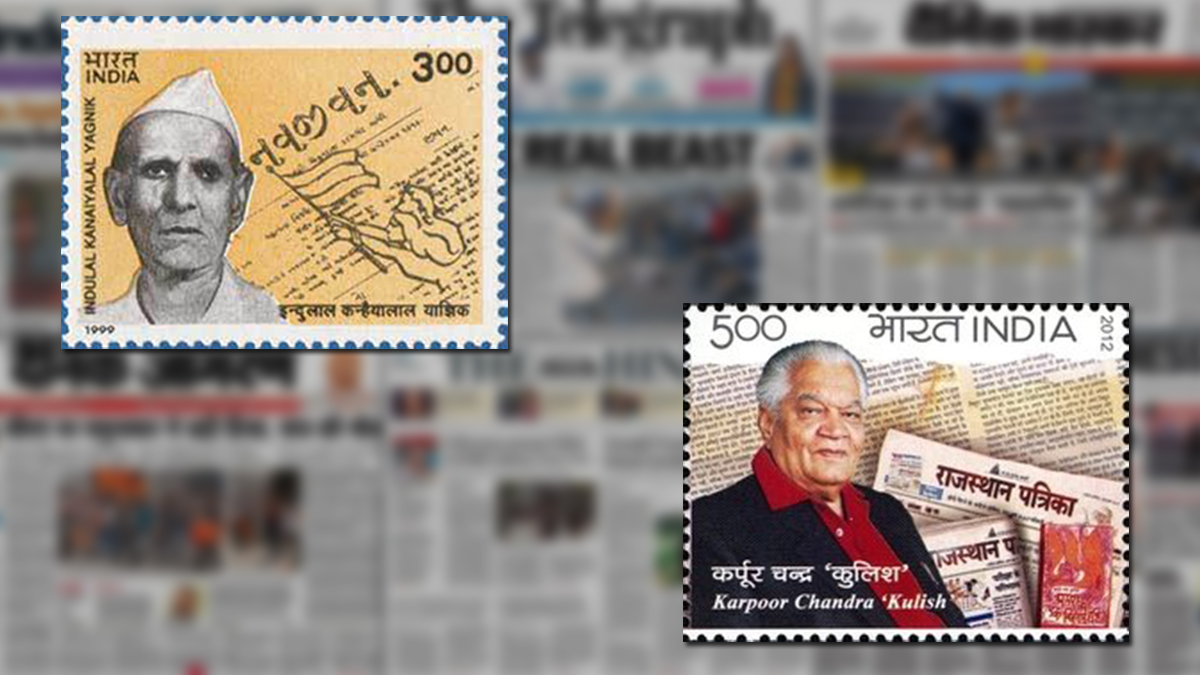 August 15th, 1947, India became an independent state. The first newspaper published barely after 3 months was Navjivan Daily. Navjivan India is an Indian newspaper published by The Associated Journals Ltd who began publishing the daily Navjivan on 1 November 1947. Earlier, a newspaper called Navjivan was published by Mohandas Gandhi, therefore with his permission, The Associate Journals started publishing Navjivan. Just like National Herald and Qaumi Awaz, Navajivan was also started with the intention to promote the principles of Mahatma Gandhi’s freedom movement and Jawaharlal Nehru’s vision of modern India. The main objective of the newspaper was to speed up the creation of democratic, liberal, and modern India. In the year 1999, India Post issued an Rs.3 stamp with the portrait of Indulal Kanhaiyalal Yagnik. A boy and a girl are seen raising the Indian Flag with the newspaper in the background.

Newspapers are still the preferred format for news in Indian households, with a strong print order of over 60 million. For more than 150 years they remain the conscious “mouthpiece” of Indian society. Even though the world has favored the electronic media the newspaper is silently fulfilling its duty towards society. As the fourth pillar of the democracy Newspapers – the Quiet Voice of India are truly honored on various stamps by India Post.