India, the birth place of legends, the country with one of the oldest civilization and having largest democratic platform is known for its unique identity and heritage. India is a cradle of various religions and culture and this is clearly reflected in its various National Symbols. National symbols of India represent the identity elements and distinctive characteristic of the country. These symbols have been chosen very carefully and depict the culture and nature of India. But, did you know that Postal Department of India has issued various featuring this National Symbols. In this part we are going to look at the National Symbols of India featured on Stamp.

The Republic of India has several official National Symbols including a historical document, a flag, an emblem, an anthem, a memorial tower as well as several national heroes. There are also several other symbols including the national animal, bird, flower, fruit and tree.

Here is the list of 8 National Symbols of India featured on Stamp you should know. 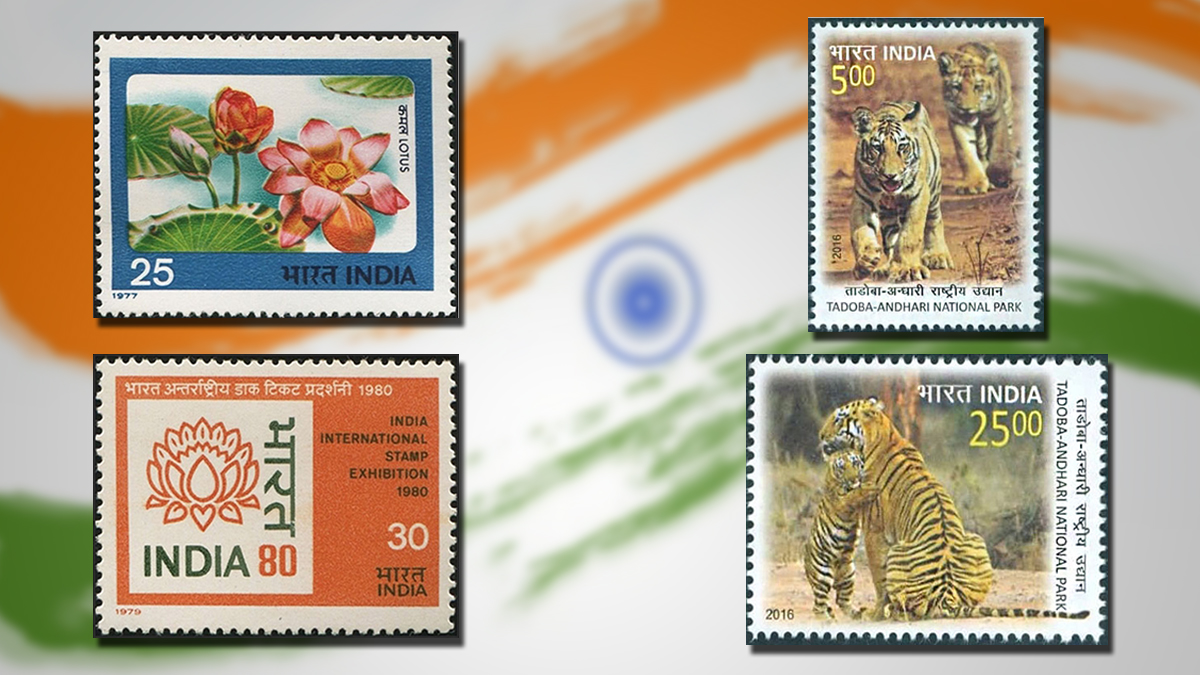 The mightiest in the cat family- Bengal Tiger, is also the national symbol of India as its national animal. Its grace and ferocious form is admired in Indian culture since eons. It was the sign of pride of many dynasties.

The magnificent tiger, Panthera tigris is a striped animal. It has a thick yellow coat of fur with dark stripes. Tiger has earned this significant position of National Animal of India because of its extreme physical power, grace, agility, and intelligence. Bengal Tiger is one of its kinds and is found mainly in India and some parts of Bangladesh, Nepal, Bhutan China, and Myanmar.

To support the cause of tiger conservation, India post issued a commemorative stamp in 1963. Beside this 2 more stamp were issued on the occasion of this International Tigers’ Day 2016. The stamp of Rs. 25 features Maya – the tigress getting a hug from her cub. On the other hand, the Rs. 5.00 stamp features two tiger cubs walking on the trail.

Since time immemorial, our national flower lotus holds a unique position in art, cultural and philosophy. It represents spirituality, fruitfulness, wealth and knowledge. The sacred lotus has pink and white petals. It was declared as the national flower of India in 1950. This aquatic perennial is generally found in Asia and northern Australia. However, it is cultivated in North America as well.

Lotus is one of the flowers which play a significant part in Indian traditions. It also has an important role in Indian religions such as Hinduism, Buddhism. Lotus is often associated with the gods and goddesses such as Vishnu, Brahma, Kubera, Lakshmi and Saraswati.

In Buddhism, it is considered to be the purity of body, speech and mind. The lotus also extends a spiritual meaning. It represents a higher level of consciousness when it searches for enlightenment and purity.

It is beautifully illustrated on the five rupees coin released by Reserve Bank of India. This beautiful National Symbol of India featured on Stamp issued in 1977.

The mesmerizing singer and dancer of monsoon and the inspiration of many poets, artists and writers since eons is the peacock, the national bird of India. Peacock, with its vivid colours and grace commands a lot of attention. It was considered royal in Gupta era and it’s not surprising that it was depicted on King Skandagupta’s silver Drachma.

This gifted bird looks exquisite with a blue velvety slender neck and blue-golden plumage which ends in long tail consisting of bright and shiny blue-green and bronze feathers. It has long sturdy brown legs with small silvery beak and similar eye patches along a natural crown-make on its head adorn a royal touch to it.

The large majestic bird was declared the National Bird of India on 31st January 1963. India Post has issued various commemorative stamps with special attention on our national bird. The stamp depicted beside was issued by the Department of Posts as a set of two Commemorative Postage Stamps on the theme of National Birds of India and Papua New Guinea featuring ‘Peacock’ of India and ‘Raggiana bird-of-paradise’ of Papua New Guinea.

The immortal tree of our land, Banyan tree is considered one of our national symbols due to integral connection to our culture. Banyan has earned its position of the National Tree of India because of its numerous benefits of providing medicines and acute shelter to people. It is known for its long branches and huge trunk.

A giant tree with a spreading crown, attaining at times 30-35 m, it has obovate, simple leaves, shiny above and pale below. Hindus considered it sacred and worship it in many temples. Even today, the banyan tree is the focal point of village life and the village council in most areas meets under the shade of this tree. In 1987, India Postal Department has issued 6 Rupee 50 Paisa commemorative postage stamps featuring this national tree on it!

Finest fruit that grows on Indian soil is Mangifera indica (king of the fruits), commonly known as Mango. There are hundreds of varieties of this fruit indigenous to the Indian sub-continent. The species domestication is attributed to Indian around 2000 BCE.

In Vedic texts, it is referred as Rasala and Sahakara. When Portuguese came to India they were in love with this yellowish orange golden looking fruit and introduced to the world as we so call ‘Mango’. India Post has depicted this delicious fruit on its stamps.

Our national river Ganga is known for its purity, divinity and nurturing nature, she originates from the Gangotri Glacier as Bhagirathi just like a ferocious tigress. Ganga basin is considered as the most fertile basin in the world. She has great religious significance in Hinduism as a goddess. On the gold coin of Samrat Samudragupta goddess Ganga is illustrated quite elegantly, standing on her vahana Makara.

Flowing in India and some parts of Bangladesh, Ganga is considered as longest river in India and home to endangered Ganges river dolphins. The Indian cities which are famous for being located on the banks of this river are Varanasi, Allahabad and Haridwar.

In 1990 India Postal department has issued 600 Paise commemorative postage stamp depicting Ganga ‘The River of Life’ on it!

Our National Flag is a blend of saffron, white and green colours (Tricoloured) placed horizontally in a rectangular form with a navy blue Ashoka Chakra in the centre (24 spokes). It was adopted in its present form during the meeting of the Constituent Assembly held on 22nd July 1947 and became the official flag of the Dominion of India – today on 15th August 1947, on our Independence Day.

Every free nation has a flag of its own as it is a symbol of its freedom as well as its identity. Adopted a few days before India’s independence from the British- the “Tiranga” – what we see and pay respect to – has a wonderful story to tell. The word “Tiranga” which literary means “tricolour” has undergone various changes since its first inception.

The colours of “Tiranga” symbolize certain significance. Saffron colour indicates the strength and courage of the country, the white indicates peace and truth while the green shows the fertility, growth and auspiciousness of the land. Furthermore, This Dharma Chakra depicted as the “wheel of the law” intends to show that there is life in movement and death in stagnation.

The “Tiranga” was proudly hoisted on 15th August 1947 as the symbol of freedom and the identity of this newly born nation. It is also featured on the first stamp of Independent India.

Our national game Hockey was able to conquer the podium for India in Olympics. From 1928 to 1956, it was a peak time for India when it won 8 Olympic gold medals in 6 consecutive wins. Dhyan Chand was the best Indian hockey player of all time. He is still remembered for his extraordinary goal-scoring accomplishments. He had won three Olympic gold medals (in 1928, 1932, and 1936) by playing hockey. It was golden period for India when he was playing hockey. In 1948, he played his final international match and scored more than 400 goals.

There are many National Symbols of India featured on Stamp and we are very excited to explore such wonderful artworks. Stay with us and let’s enjoy this together.