This is a story of heroes who fought for India. It’s a story of patriotism and sacrifices. Its story with real facts- This is the First War of Independence. Let’s revisit the episodes of 1857 through special insight on philatelic and numismatic issues. But first, don’t you want to know who the main heroes were? The answer lies on this 60p 1988 Indian stamp depicted on this first-day cover- Rani Laxmi Bai, Begum Hazrat Mahal, Bahadur Shah Zafar, Mangal Pandey and Nana Sahib. 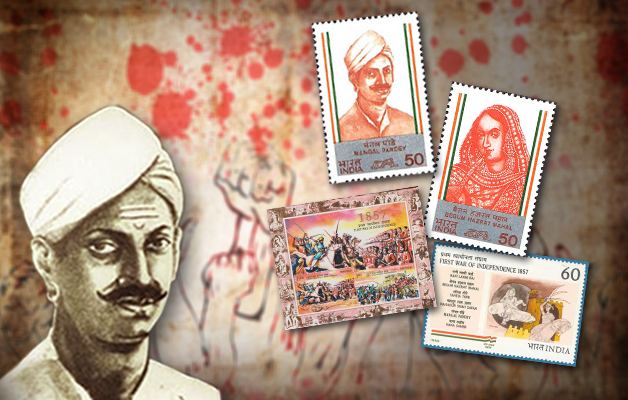 It all started with the British East India Company’s policy of expansion. With the introduction of harsh laws such as the Doctrine of Lapse and Subsidiary Alliance, the Indian princes were reduced to mere puppets. This action led to many men and leaders taking up arms against the Company, beginning the first ever War of Independence in 1857.

One such great man was a 26-year-old Mangal Pandey, a sepoy at the 34th infantry. The court marshal of Jamadar Saligram Singh for refusing to use the greased cartridge, disbanding of the 19th infantry and the general feeling of unfairness and arrogance by which the sepoys were treated greatly disturbed him. On 29th March 1857, he fired a bullet at a British Sergeant and broke into open mutiny marking the beginning of the War of Independence. The Indian postal department issued these four stamps in 1984 to honor the leaders of the Sepoy Mutiny. Among them was that of Mangal Pandey. The other stamps included Tatya Tope, Begum Hazrat Mahal and Nana Sahib, all bearing the same face value of 50p. He can also be seen on this special cover depicting his Shaheed Smarak statue at Meerut, issued in 2004. 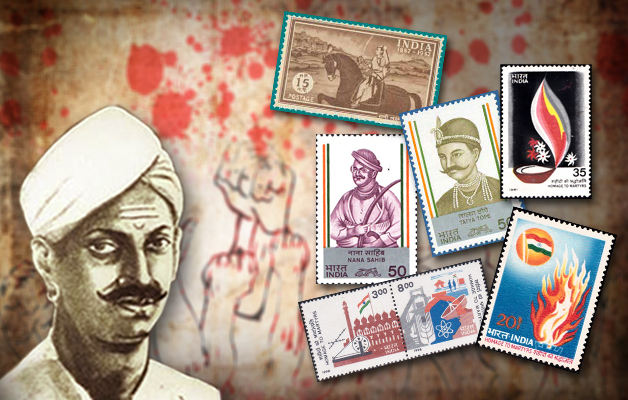 The war of 1857 had limited achievements but it brought an end to the East India’s Company atrocious rule. Considering the significance of this war, in November 2007, the RBI issued this Rs. 5 general circulation coin to commemorate its 150th anniversary.

The reverse shows the combined portraits of Bahadur Shah II, warrior Rani Laxmibai, General Tatya Tope along with the legend “Pratham Swatantra Sangram” mentioned in Hindi, (upper left periphery), and “The First War of Independence” in English (upper right periphery). Below the portrait is “150 varsh” and “150 years” in Hindi and English. The obverse depicts the Ashokan Pillar and denomination of Rs. 5 mentioned. The same obverse and reverse depictions are also seen on a Rs. 100 commemorative coin issued to mark the same occasion. The postal department also issued a miniature sheet and sheetlet of Rs. 15 face value stamps. The image of Mangal Pandey is illustrated on its border along with other sepoy mutiny leaders.  They also issued this beautiful first-day cover to mark the 150th-anniversary celebration.

The year of 1857 will always remain historic, after all, that war was just the beginning.