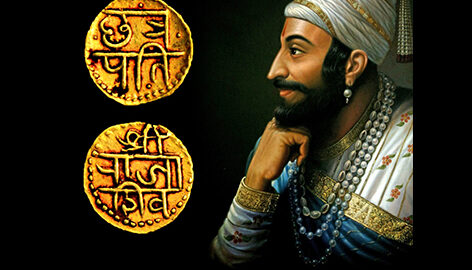 The period of the 17th century was an era of chaos and general discontent among the Hindu population of the Deccan. People secretly desired a saviour who could eliminate the injustice and promise them the land to call their own. The liberator finally arose. Armed with the concept of Hindavi Swarajya, a young Maratha man rose to prominence. History knows him as “the Great Maratha Chhatrapati Shivaji Maharaj” and this is the life story of Chhatrapati Shivaji Maharaj. Armed with the concept of Hindavi Swarajya, the Marathas rose to prominence in the western Deccan Plateau (present-day Maharashtra) under the leadership of Shivaji Bhonsale. Starting from a small Jagir, he built a powerful kingdom from the declining Adilshahi sultanate of Bijapur and fought against the Mughals as well as the foreign powers.  The Marathas, under the leadership of Shivaji Maharaj, consolidated their territories during the Mughal-Maratha Wars pioneering the guerrilla warfare methods and later controlled a large part of the Indian subcontinent.

Shivaji Maharaj was left with a small but efficient council of ministers, along with the responsibility of his father’s Jagir in Pune. He managed the estate well with the help of this council and made his base at Shivneri – a fort near Pune. The life story of Chhatrapati Shivaji Maharaj begins with the first conquest that came at the age of sixteen when he seized the Torna fort and gradually started annexing the neglected forts of Adilshahi in the vicinity of Pune. His next target was Raigad, formerly known as Murumbadevacha Dongar. This fort in the later period becomes the most important part of Shivaji’s conquest. For the next couple of decades, Shivaji Maharaj successfully tackled the two mightiest dynasties- the Adilshahi in the south and the Mughals in the north (coins, other pictures – shah Jahan/Aurangzeb). He had limited resources and manpower but compensated it with his multitude of courage, brilliant acumen and the art of Kautilya neeti of Chanakya. Step by step Chhatrapati Shivaji Maharaj secured the forts in the Western Ghats and Konkan coast. The Life Story of Chhatrapati Shivaji Maharaj has been adorned on many stamps of India. 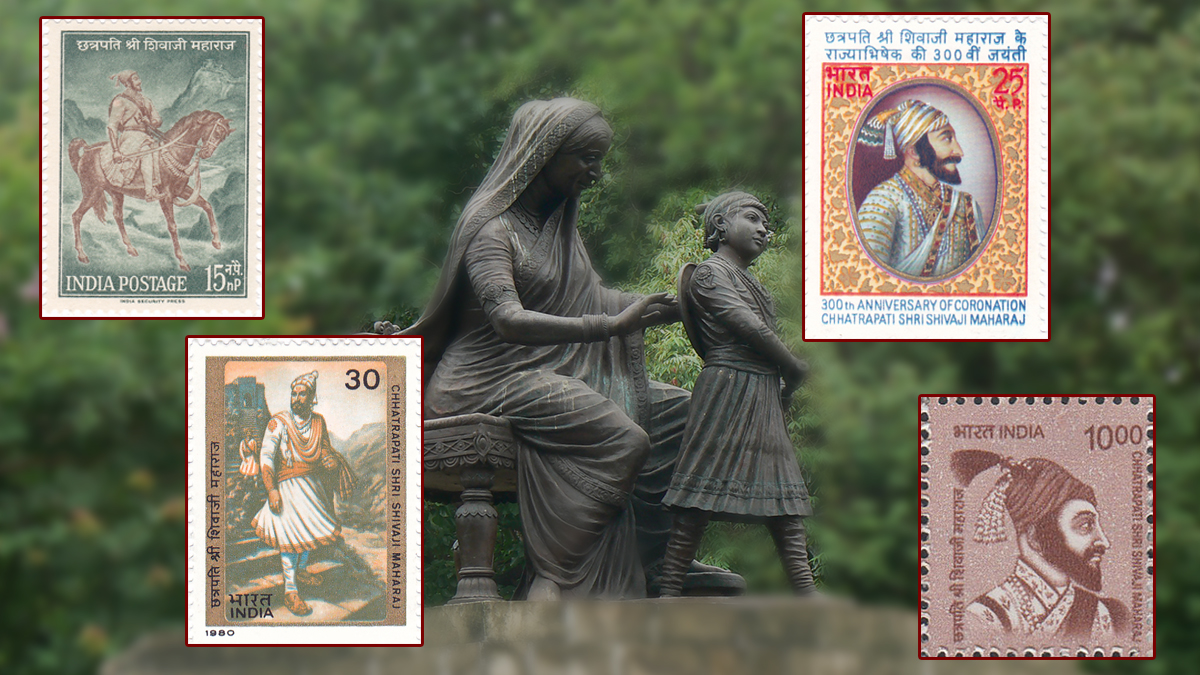 In 1961, India Post issued a 15 Naya paisa commemorative stamp of Shivaji riding a horse. Another commemorative stamp of Shivaji’s coronation or ‘Rajya-Abhishek was issued in 1974. This 30 paise 1980 stamp depicts Shivaji as a regal and just ruler against the backdrop of Raigad Fort. It was issued on his 300th death anniversary. The most beautiful stamp of all is perhaps this stamp of 1999. It portrays motherly affection between young Shivaji and his mother Jijabai who was the most influential as well extremely important character in the Life Story of Chhatrapati Shivaji Maharaj.

Shivaji Maharaj established a competent and progressive civil rule with the help of a disciplined military and well-structured administrative organizations. He also introduced new military tactics which pioneered guerrilla warfare methods. He was clever enough to establish a navy to protect the coastline. Step by step Shivaji Maharaj secured the forts of the Western Ghats and Konkan coast, rising to a position of invincible leader. The Marathas, under the leadership of Shivaji Maharaj, Marathas consolidated their territories the pioneering the guerrilla warfare methods. The subjects of Shivaji already recognized him as king, he needed a broader recognition.  Hence the need for coronation arose. The coronation took place on the 13th day (trayodashi) of the first fortnight of the month of Jyeshtha, 6th June 1674 at Raigad Fort. Shivaji formally assumed the title of a king and became the first Chhatrapati of the Maratha Empire. As a symbol of sovereignty, the Rajyaabhisheka Shaka (The Coronation Era) was started. 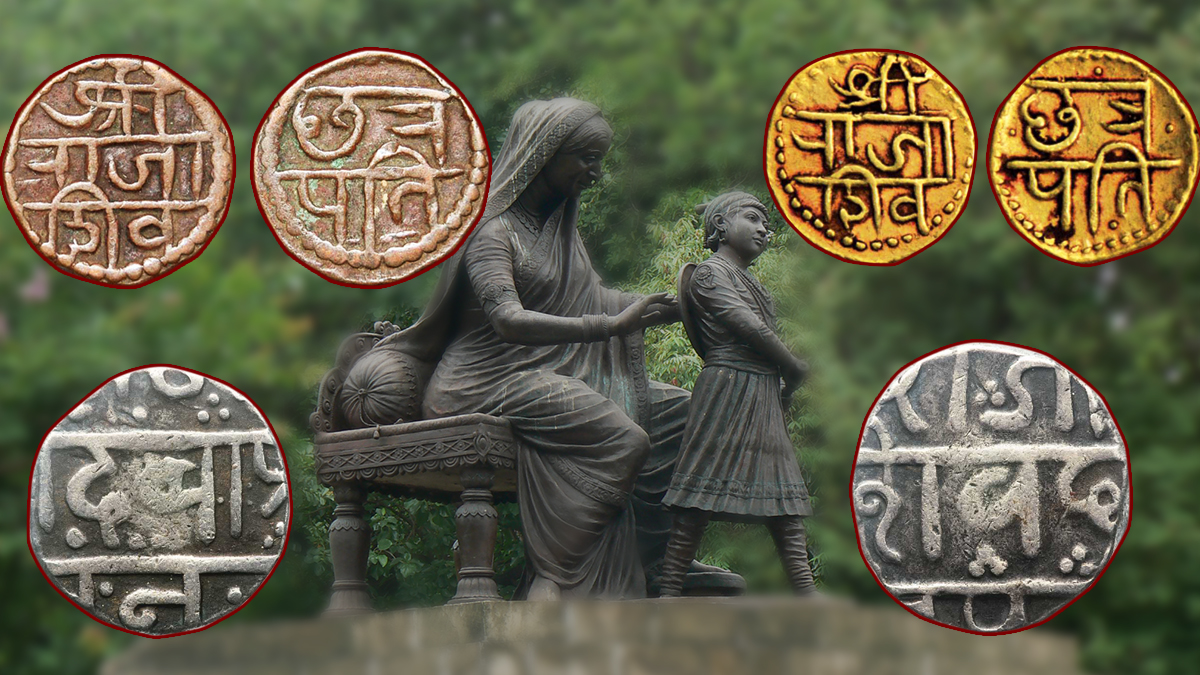 When Shivaji was becoming Chhatrapati of the Maratha Empire, special coins were minted called Shivrai or Hon. The gold, silver and copper coins bear Chhatrapati in Devnagari on one side and Shri Raja Siva on the other. The inscription in Devnagari on the coins was a huge step as the ruling powers of that period issued coins mainly in Persian. These coins remained in circulation till the end of the 19th century, primarily in the Bombay Presidency region. In 1999, the Reserve Bank of India issued 2, 50 and 100 rupees coin portraying the bust of Shivaji in his memory.

Shivaji’s swarajya was accomplished with extreme adversities. He stirred his subjects up from their slumber and ignited in them the spark of freedom.  One of Shivaji’s great qualities was, while his head always looked up to the sky, his feet were always firmly entrenched on the ground. This was all it took for a hero to be born.

In less than 40 years, Shivaji Maharaj consolidated a kingdom so powerful that it acted as a strong plinth for the Maratha Empire that rose during the early 18th century. The Life Story of Chhatrapati Shivaji Maharaj does not end here. The next few decades witnessed the spread of Maratha power all over the country. The path this visionary king showed went up the peak of prosperity and development.