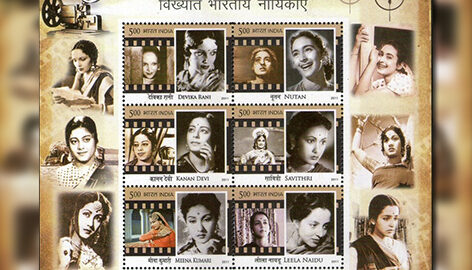 ‘Raja Harishchandra’ is touted to be the first Indian film. While making his film, Dadasaheb Phalke had to come across several challenges. The biggest one was to search for a woman who would be the heroine in the film. But no woman agreed to work in the film. Eventually, he had to make a male actor enact the female role. In this view, India’s first heroine was not a woman, but a man instead! So, you can imagine how difficult it was for women to usher in a new era in Indian cinema. Celebrating International Women’s Day, here’s a tribute to Legendary Actresses of Indian Cinema featured on Stamps who walked past the conventions and built a revolution of their own, pioneering Indian cinema into a new direction.

Women’s history has a facet we must celebrate. Women have been part of Indian stamps for decades. The first Indian woman on postage was Mirabai, issued on 1st October 1952, and was for 2 annas. Since then hundreds of Indian women stamps were issued and they commemorated women from history to film actors. On 13th February 2011, six commemorative stamps featuring famous Indian actresses—Meena Kumari, Nutan, Leela Naidu, Devika Rani, Savithri Devi and Kanan Devi—were released at Indipex.

Here is a list of all six Legendary Actresses of Indian Cinema featured on Stamps. Let’s all remember these extraordinarily talented actresses on this Women’s Day. 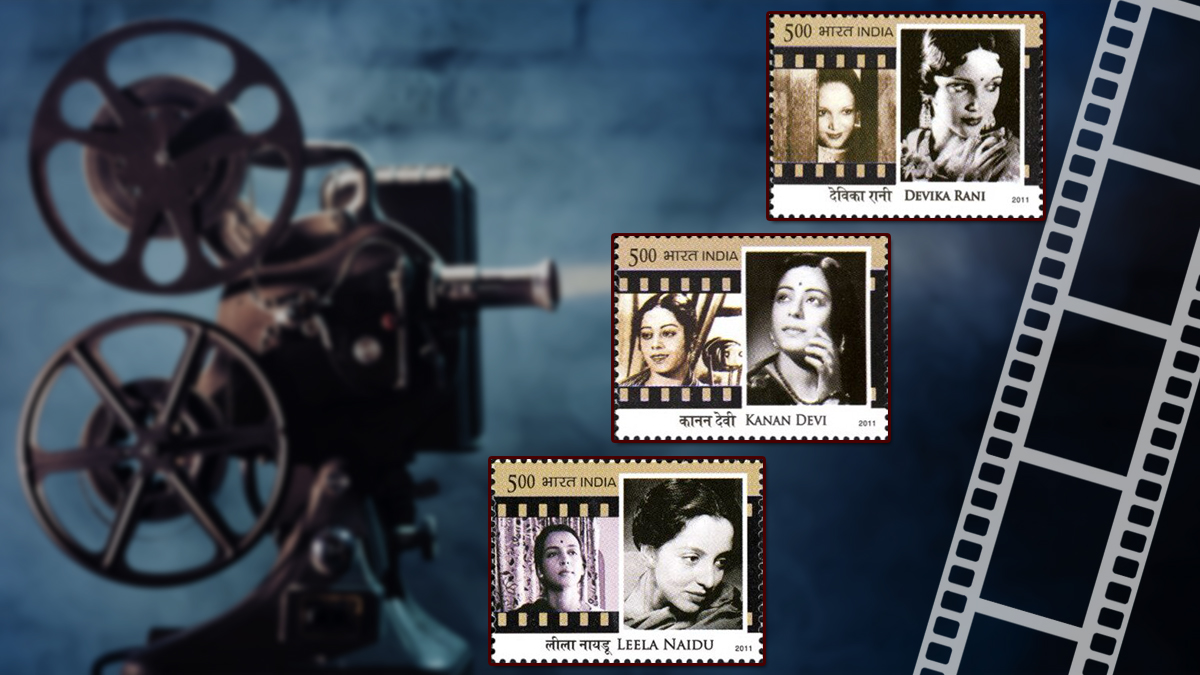 The biggest actress of Indian cinema, Devika Rani was born on 30th March 1908 in Vishakhapatnam, Andhra Pradesh. She is regarded as the First Lady of Indian Cinema. Devika Rani dazzled the screens for almost 10 years in the 1930s and 40s. She made her cinema debut opposite her husband in Karma (1933).

Rani was admired both for her luminous beauty and for her sensitive acting in such films as Achhut Kanya (1936; “The Untouchable Girl”), Jeevan Prabhat (1937), Nirmala (1938), and Durga (1939). She has won one of the highest civilian awards Padma Shri and was the first recipient of the Dada Saheb Phalke Award for Lifetime Achievement. She acted in many women-centric films.

A postage stamp commemorating her was released by the Ministry of Communications and Information Technology in February 2011.

Kanan Devi, the evergreen melody and movie queen of the 1930s and 40s, was a remarkable personality. She was among the early singing stars of Indian cinema and is credited popularly as the first star of Bengali cinema. Her singing style, usually in rapid tempo, was used instrumentally in some of the biggest hits of New Theatres, Kolkata.

It was her superb performance in Radha Film Company’s Bengali production “Manmayee Girls School” that made Kanan famous. She was acclaimed by the media as the prettiest and most attractive singing star of the day. She was a woman of many dimensions: a fashionista, a producer who made many successful films in the fifties and sixties, a philanthropist for women in theatre and film-centred welfare projects.

Remembered for her stunning classical beauty and subtle acting style, Leela Naidu was born in 1930. She was an actress who starred in a small number of Hindi and English films, including Yeh Raste Hain Pyar Ke (1963), based on the real-life Nanavati case, and The Householder, Merchant Ivory Productions’ first film.

She was Femina Miss India in 1954, and was featured in the Vogue along with Maharani Gayatri Devi in the list of ‘World’s Ten Most Beautiful Women’, a list she was continuously listed from the 1950s to the 1960s in prominent fashion magazines worldwide. She acted only in nine films during her lifetime, and even during the prime of her career shunned the limelight. Leela Naidu was a charming Indian beauty with a conspicuous touch of Western sophistication and elegance.

The beautiful actress passed away on 28th July 2009, in Mumbai after a prolonged illness. A documentary on her life, Lila, was released in 2009 after her death. To honour here India Postal Department has issued a stamp of value 500 Paise in 2011. 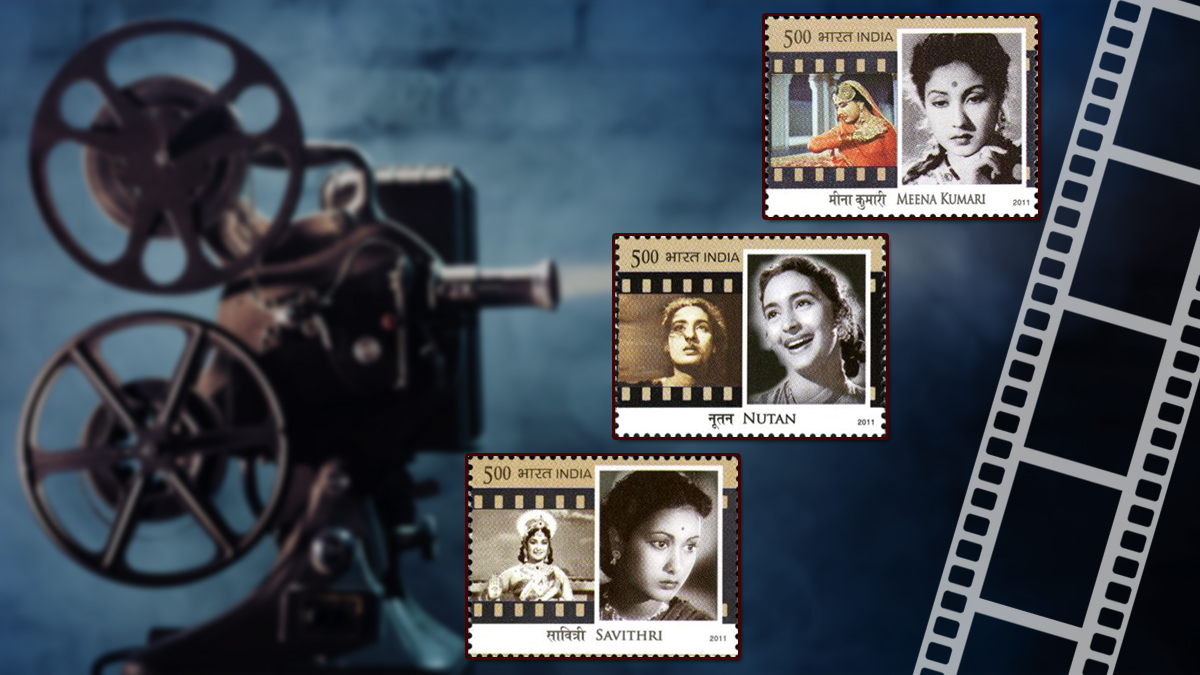 Popularly known as the “Tragedy Queen”, Meena Kumari will always be remembered for her soulful performances in Hindi Cinema. Born on 1st August 1972, she acted in more than 90 films, during her 30 year-long careers. Kumari got recognition for playing tragic and sorrowful roles which captivated her audience.

There was a thin line between her real and reel life as her successful career was hindered by heavy drinking, troubled relationships and deteriorating health. She succumbed to liver cirrhosis on 31st March 1972.

A special 5-rupee commemorative stamp was released in memory of this legendary actress whose beauty was shadowed by her indescribable agony. The stamp was released in the year 2011 which portrayed a close-up, black and white picture of her typical sorrowful look along with a colour image of her in a Kathak dance pose.

Nutan Samarth Bahl better known as Nutan was born on 4th June 1936. She was a celebrated Indian actress who appeared in more than 70 Hindi films in a career spanning over four decades. Nutan is also regarded as one of the finest female actors in the history of Indian cinema.

Nutan made her debut at the age of 14 in the 1950 film ‘Hamari Beti’, directed by her mother Shobhna Samarth. Her role in Seema (1955) garnered her wider recognition and a Film fare Award for Best Actress. She was best known for her role in ‘Sujata’ and ‘Mai Tulsi Tere Angan Ki’.

Nutan held the record of five wins of the Best Actress Award at Film fare, for over 30 years until it was matched by her niece Kajol in 2011. She also holds the honour of being the most-awarded actress in the female acting categories at Film fare, with six awards alongside Jaya Bachchan.

In 1974, she was awarded the Padma Shri by the Government of India. India Post on 13th February 2011 released a miniature sheet of 6 stamps featuring the “Legendary Heroines of India” of which one INR 5 depicts Nutan.

Mahanati Savithri was a legendary Telugu actress who rose to fame from the ’50s to the early ’70s. In the series of Legendary Actresses of Indian Cinema on Stamps, one is dedicated to Savitri. The 5 rupees stamp features a close-up photo of Savitri along with another picture from one of her films.

Savitri was not only a brilliant actress but was also a playback singer, dancer, director and producer. She was paired onscreen with leading actors in Telugu and Tamil movies and also appeared in Kannada, Malayalam and Hindi films. She got her first big break in the 1952 Telugu film Pelli Chesi Choodu and received the Rashtrapati Award in 1960 for her work in ‘Chivaraku Migiledi’. She produced and directed the Telugu film Chinnari Papalu in 1968, which got the state Nandi Award for Best Feature Film (Silver). The 30th International Film Festival of India nominated her on the list of women in cinema.

Born on 4th January 1936, Savitri’s father died when she was six months old. Her uncle enrolled her in dance classes where she began to shine. In her childhood, Savitri acted in dance dramas for theatre. She was cast as the female lead in Samsaram in 1950. However, she failed to deliver because of her excitement and was replaced by Lakshmi Kantham. She played two to three minor roles until she was cast as the second heroine in Pelli Chesi Choodu.

For decades, Hindi cinema has been a mirror reflecting the times and scenarios the nation has gone through. From playing decorative objects in movies, if not victims or martyrs, to becoming a strong force, women have come a long way in our movies. Along with the stamps, India Post also released a booklet, which contains brief biographies of the six ladies, including their major films, awards, etc. This blog covers some of the beautiful aspects of Legendary Actresses of Indian Cinema featured on Stamps.

So what are you waiting for? Say Lights, Camera, Action and start collecting stamps of India featuring the legendary actress.