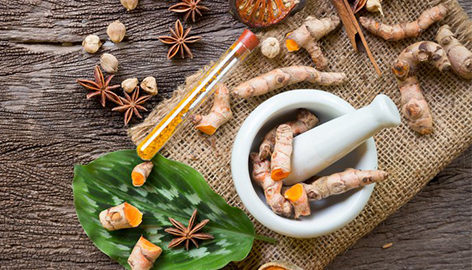 AYUSH systems of healthcare form the foundation of India’s Medical Heritage. These systems are not merely sciences of disease and drug but have their conceptual spheres touching every aspect of life. Pathfinding visionaries have appeared in each of the different streams of AYUSH systems at different times in history and made valuable contributions to the growth and development of respective practices. India Post has issued all together 12 commemorative postal stamps to honor eminent scholars, Practitioners, and great Master. The main motive behind the series Master Healers of AYUSH is to celebrate their unsung legacy. Here is the list of 4 Master Healers of AYUSH featured on stamps. 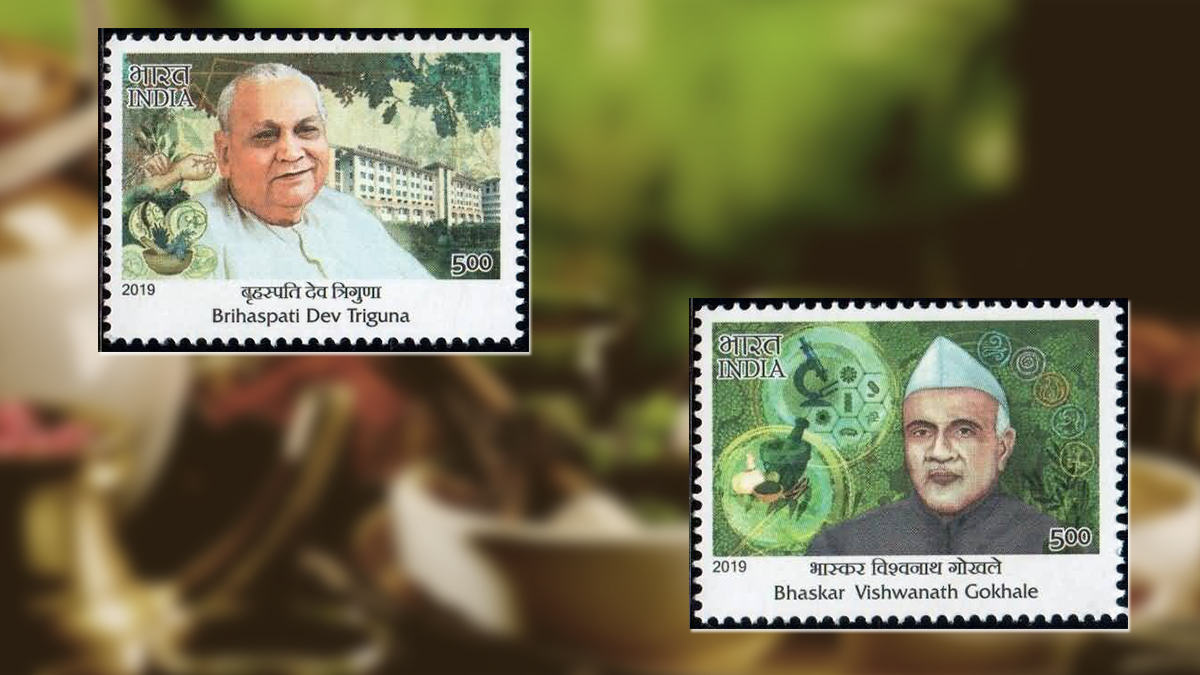 Raj Vaidya Brihaspati Dev Triguna was an accomplished Ayurvedic physician and scholar. He was renowned for his skills in Nadi Vigyan, the ayurvedic technique of pulse diagnosis. Many leading personalities including Presidents and Prime Ministers of India were his patients.

He completed his formal ayurvedic studies under the guidance of Rajvaidya Pandit Gokul Chand Ji in his Gurukul from Ludhiana. During his illustrious practicing career of 72 years, he used to see about 500 people every day with the meticulous diagnosis.

To honor him India Postal Department has issued commemorative stamps in the series of ‘Master Healers of AYUSH’. A 500 Paise (or Rs.5/-) stamp depicting Brihaspati Dev Triguna and his pulse diagnosis techniques. In the right background is the Institute that was established at his initiative.

Bhaskar Vishwanath Gokhle was a skilled teacher, far-sighted visionary and eminent Ayurveda physician. He emphasized the need for quality Post Graduate education and research in Ayurveda. He was also one of the early votaries of the integrative medical system.

He was born on 19th April 1903 at Kolhapur, Maharashtra. He completed his primary and secondary school education at Kolhapur and then changed the base to Mumbai for further studies. He completed the degree ‘Ayurveda Visharada’ of Tilak Maharashtra Vidyapeeth in 1928. An active participant of many socialist and independence movements and campaigns, he suffered imprisonment many times. He was an active participant in the Quit Indian Movement.

His ideas to increase the potency of regularly used drugs are familiar as Ekaushadhi Prayoga. His teachings continue to serve as guiding light for generations of Ayurveda professionals even after so many decades. He has written books on ‘Dosha dhatu mala vidnyana’, ‘Vikruti vidnyana’; which are renowned for their new insights in Ayurveda.

To honor him India Postal Department has issued a commemorative postage stamp in the series of ‘Master Healers of AYUSH’. A 500 Paise (or Rs.5/-) stamp depicting Bhaskar Vishwanath Gokhale. In the background are a microscope, herbs and a herb grinding bowl/pestle.

Born on 25 September 1912 in Delhi, he did his schooling at Karachi and Ambala and graduated in homeopathic medicine from the Calcutta Homoeopathic Medical College. He made extraordinary efforts for the recognition and advancement of Homoeopathy. In appreciation of his services to the cause of Homoeopathy, he was conferred upon the National Award by N.C. Chakravarty Memorial Committee. He was also honored with the Padma Shri by the Government of India in 1969.

For his magnificent contribution towards the development of Homoeopathy, India Postal Department has issued commemorative stamps in the series of ‘Master Healers of AYUSH’. A 500 Paise (or Rs.5/-) stamp depicts K.G. Saxena in the foreground. In the background are a homeopathy medicine chest and a few bottles of Homoeopathic medicines kept alongside. Also seen is a portrait of Samuel Hahnemann who created Homoeopathy as alternative medicine. He is also among the 12 Master Healers of AYUSH to be honored with a postage stamp by the Union ministry of Ayush.

The personal physician and a close confidante of Mahatma Gandhi, Dr. Dinshaw Mehta was deeply committed to natural and holistic methods of cure. He helped Mahatma Gandhi established the Nature Cure Clinic and Sanatorium at Pune, which is presently the National Institute of Naturopathy. Mahatma Gandhi spent 156 days here in 1944.

Dr. Dinshaw carried out scientific studies in Naturopathy, especially on fasting. He is a true pathfinder for Naturopathy in India. India Postal Department has issued 12 commemorative stamps in the series of ‘Master Healers of AYUSH’ One of these stamps honoring the great master, Dr. Dinshaw Mehta. The 500 Paise stamp beautifully designs on green color background. It depicts the portrait of Dinshaw Mehta in the foreground. In the background, he is seen with Mahatma Gandhi in front of the Institute, he helped set up.

These commemorative postal stamps highlight the great work and acknowledge the achievements of the great Master Healers of AYUSH Systems. These master healers are the ones who have contributed significantly to the field of the Indian system of medicine.