Despite rapid social and technological changes in India, the use of craft products is an integral aspect of an Indian’s social life.  Handicraft aims at processing materials by hand with hand tools. The result of this can be a useful thing or a decorative item. The tradition of making handicrafts is deeply frozen in the social norms of Indian society. In any of the handmade products, a crafter transfers an aspect of their cultural heritage to the ideas, forms, material and manufacturing process of the craft.

They’re skilled employees whose profession relies on manual skills. Their main tools are the power of work strategies. Handicraft contains plenty of implicit data that grows every year, along with skills. The order and apprentice system has been widely used to transfer skills and implicit data. This aspect of handicraft is recognized by India Post. In 2018, the Indian Postal Service has issued a series of handicrafts on stamps. The illustrated handicraft in these stamps series is well known and G.I tag recognized by the Indian Government. 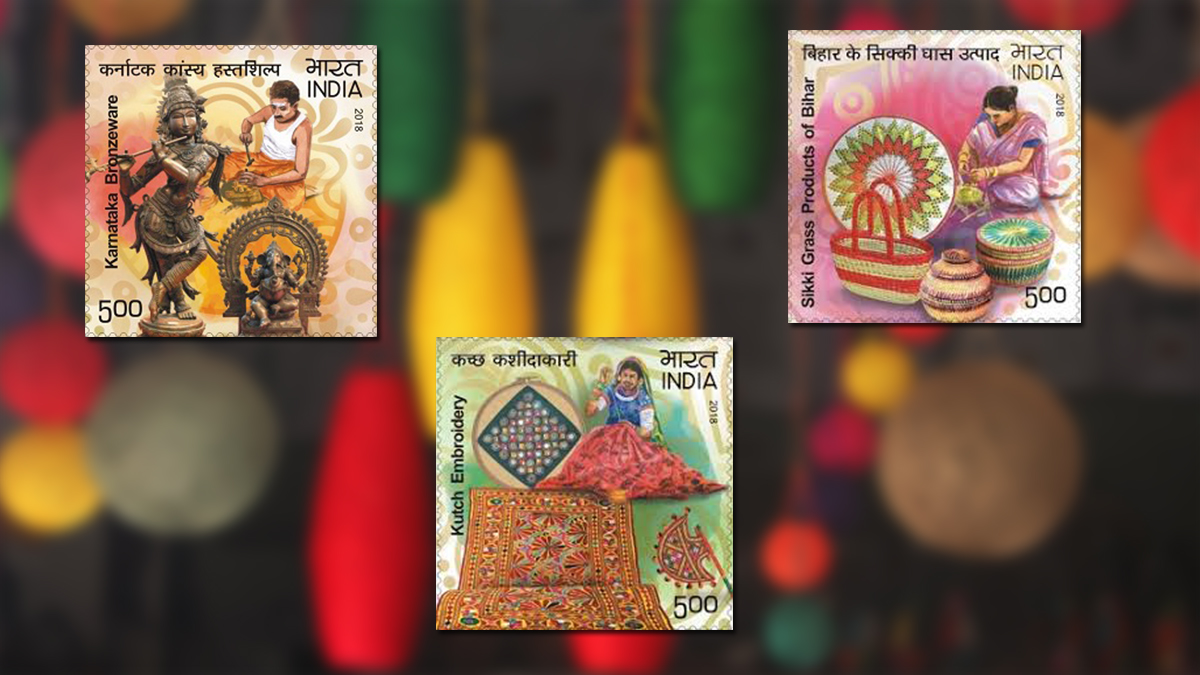 Karnataka is famous for its craft call Bidriware from Bidar, as it is the chief center for the manufacturing of this unique craft. It is a craft created on metal plates like zinc, copper, tin, and lead. The art of Bidri was developed in the 14th century CE during the administration of Bahamani sultanate in the south. The technique of this art is influenced by Persian art. It is said that the first time it was brought to India by noted Sufi Khwaja Moinuddin Hasan Chisti in the form of utensils. To create Bidri, one has to follow eight stages of the process. The famous utensils that are in demand in the Nagamangala area near Mysore are the Bidriware like an ornamental jug, bowls, plates pen holders, candlesticks and even paper knives.

This rare and unique handicraft has also obtained a place in the Geographical Indications (GI) registry. In 2018 India Post illustrated this magnificent native art of Karnataka in a series of stamps called handicraft on stamps. Bidriware is also practice in states like Telangana, Bihar, Utter Pradesh, and West Bengal.

According to historians, Kutch embroidery was brought by ‘Kathi’ cattle breeders.  Later on, they settled down in the Gujarat area and created some fine needlework that displayed a variety of elements, designs, themes, patterns and moods known as Kutch embroidery. This embroidery has been practiced and created in the Gujarat-kutch area for centuries. Between the 16th and 17th centuries, Kutch embroidery’s masterpieces were exported to western countries.  It is also believed that mochis or shoemakers were taught Kutch embroidery 300 years ago by a Muslim wanderer in Sindh and that is what started the tradition. The embroidery of Kutch further clubbed with the native tradition of Sindh tradition which evolved six styles like Suf, Khaarek, and Paako, Rabari, Garasia Jat and Mutava.

In March 2013, these colored handicrafts of Kutch received the registry of Geographical Indications (GI). India Post also issued a stamp illustrating this craft in series handicrafts on stamps in 2018.

Considered auspicious by the natives, the Sikki Pas handicraft involves the practice of weaving bamboo and cane into ornaments and an object of utility is a way for women to vent out their creative instincts. Since historical time, the area of Bihar has been home to many dynasties which paved the way too many craft development. Sikki Pas craft utilizes grass available in the surrounding that has served as a vital raw material in making a variety of products since ancient times. There is hardly a ritual where it is not taken into account, figures of deities and votive offerings are woven during festivals, young women weave baskets known as ‘Pauthi’ which are used to exchange gifts in a wedding, household items such as boxes, toys, jewelry, and murals are also crafted out of this grass. Sailesh puja, the only festival of the Moosahar tribe involves a wide range of colorful Sikki products for ritualistic uses. Boxes made of Sikki are known as Pauti which are given to daughters by parents on the occasion of their weddings.

This native and sophisticated craft of Bihar has received the Geographical Indications (GI) tag. India Post has also issued a stamp in 2018 illustrating this unique craft. 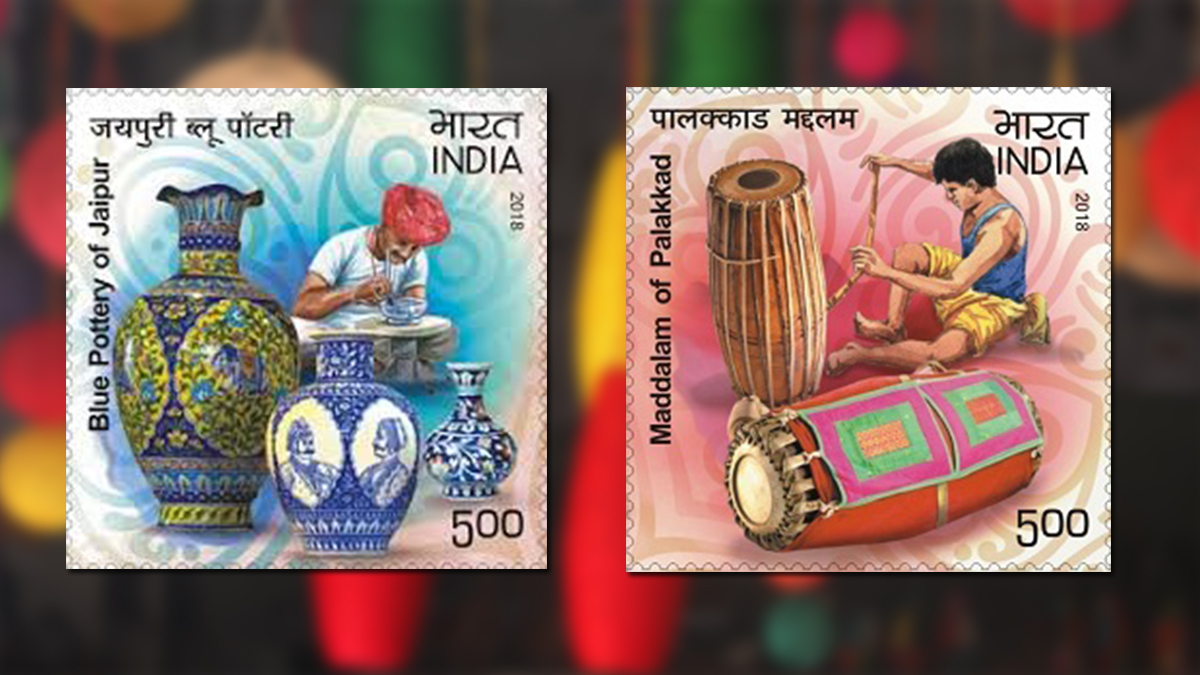 Jaipur Blue Pottery is widely recognized as a traditional craft of Jaipur. His art of Rajasthan is influence by Turko-Persian in origin. The name ‘blue pottery’ comes from the vibrant cobalt blue dye used to color the pottery. It is one of many Eurasian types of Blue and White Pottery and related in the shapes and decoration to Islamic pottery and more distantly to the Chinese pottery. Some of these potteries are semi-transparent and mostly decorated with bird and other animal motifs. Being fired at very low temperature makes them fragile. The range of items is primarily decorative, such as ashtrays, vases, coasters small bowls and boxes for trinkets.

India Post has issued this unique pottery art on stamp through its 2018 stamp series handicrafts on stamps. This stamp is also a reorganization of its Geographical Indications (GI) tag.

Madhalam is a percussion instrument that usually accompanies art forms like Kathakali. It is a round-shaped drum made out of jack wood or the wood of the Jackfruit tree. The wood is given a basic shape at first and then polished well. It is tied tightly with ropes. The two sides that are meant to play are made up of leather. Both these sides are made in such a way that they produce different sounds. The instrument is tied around the waist of the person playing this instrument.

In 2018, this fascinating handicraft related to one of the eight classical dances of India is illustrated on stamp through the initiative of India Post in the series of Handicraft on stamps. Its idea was initiated to celebrate the unique craft of India and spread awareness about this age-old tradition.

The Indian Government has utilized a great number of resources for the restoration and sustenance of this traditional handicraft. There are many contemporary artists and designers who have tried to uplift this traditional craft making and increase it’s marked to preserve them. To further encourage and make it a successful career and profession for many, the institute of Craft and Design are established in Jaipur. Yet these efforts are not enough because the actual creator of this art is on the decline. Due to the cost and production of the material these artisan communities cannot effort to mass-produce this handicraft. Hence the value to this product increases and demand has decreased. As the trends are improvising hand-made stuff has a gradual rise in the market making Indian handicraft a timeless commodity. This unique aspect had increased the appeal of the craft and a gradual rise in its demand is seen in recent years due to its style, antiquity, and ethos. Indian handicrafts are unique and beautiful in their own ways which deserved a unique position in India’s social aspect and market.