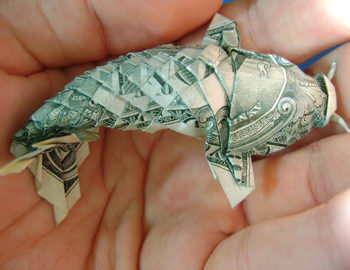 Your parents must have told you that ‘do not fold the paper currency’ or ‘don’t scribble or write anything on currency notes’. Everyone sees Currency note as a legal tender which is used to purchase goods and commodities. But what if we tell you that the artists have imaginations which are far away from us because they are using every medium to paint or doodle on. We can guess what’s running in your mind…and bang on you are right! It’s the “Dollar Bill Art”

Wondering what it is?

The Artists nowadays are coming up with their new ideas and working them out on the Currency Notes. And this is becoming very popular and artists are calling them as ‘The Dollar Bill Art’.

One of the profound artists, James Charles began to draw on dollar bills, for the sake of his own amusement. He started making faces of celebrities, monsters, etc on the dollar bills and then he thought of preserving them and started building up his own collection. He found ink and materials to match perfectly what the U.S. Mint uses on their banknotes and began to experiment with ways to alter the font and script along the bottom of the bills. He started sketching on different denominations of Dollars. James declared that these are no longer legal currencies and can be accepted as art objects.

The listed below are few of the Dollar Bill Art by James Charles:

If this didn’t interest you, we have some more unique word art made from the Dollar bill.

Another artist, Dan Tague is fond of folding the various denominations of the dollar to read messages. A little twist and turn here and there can make such a wonderful art you can never think of.  He folds a dollar piece as many as 100 times until it spells out an unexpected phrase. He photographs the origami currency on a black background and prints the photos in a large format. Let’s check them out:

A 5 Dollar bill read “Live Free Or Die” (top left) and One dollar when folded in different ways reads “Need A Revolution” (bottom left), “Don’t Tread On Me” (top right) and “Trust No One” (bottom left).

We are sure that you too are connecting these phrases. We never thought that such things can be done from the Currency notes, isn’t it?

Would you like to see more of these?  Don’t worry we are not finished yet, we have many more quirky ‘Dollar Bill Art’

At one or the other point of time we have made origami crafts in school, but have you ever heard of Moneygami?

Moneygami is an art of folding Currency notes into various styles and shapes. Any usages of cuts and glue are not allowed in this art, it’s only paper folding! Check this mesmerizing Moneygami below: 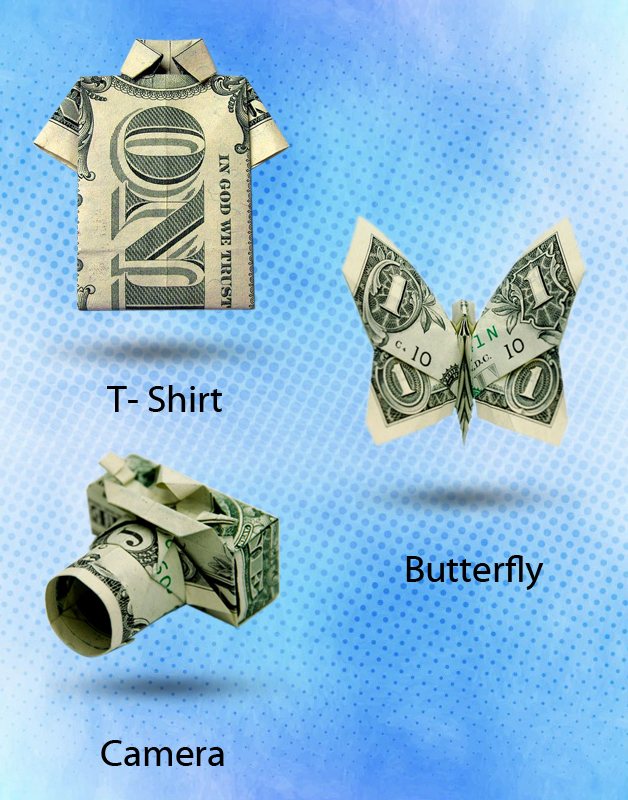 Astonished? Though money isn’t everything we are sure you can do lots of stuff with money. For us, we always used to say ‘coins and currencies are used as a medium of exchange and for collection’. But now we know that we can get creative with Paper Money too. It is rightly said that an artist finds his way. 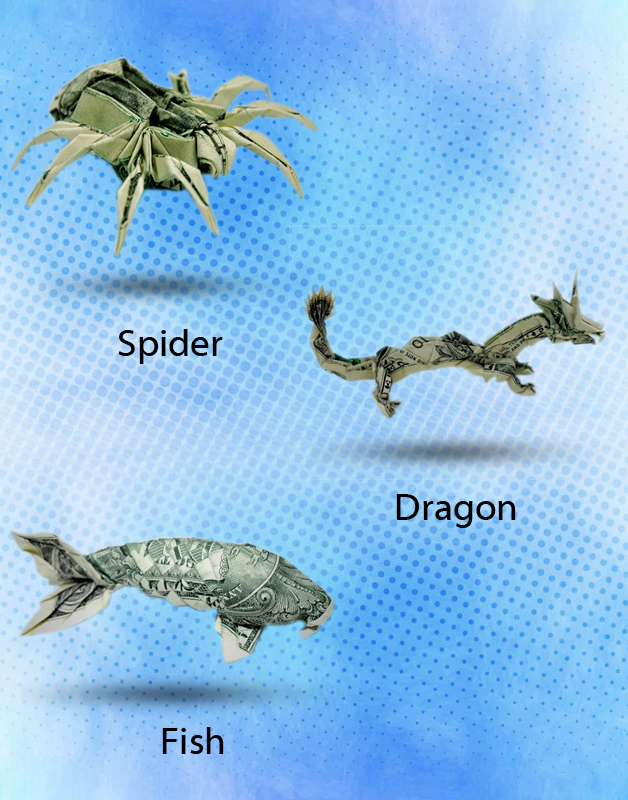 Let’s spread awareness about this unique trendsetter ‘The Dollar Bill Art’. This Dollar Bill Art would probably make more money than its original face value. We recommend you that DO NOT TRY such things until you are an artist or otherwise you will end up wasting your currency notes.

The Reserve Bank of India has put into action many campaigns to raise awareness against and to discourage writing on currency notes, especially on its watermark window as it bears a security feature which helps differentiate a banknote from a fake one.

SO, IS IT OKAY TO WRITE ON BANKNOTES?
Absolutely not.

Art papers and colouring books are not that expensive; fetch them if you like scribbling. We suggest you follow your parents’ advice and ‘not fold the paper currency’ or ‘ not scribble or write anything on currency notes’.

Mintage World will keep coming with such innovative articles. Stay in touch and keep exploring our website because you never know what we are coming up with. Cheers!