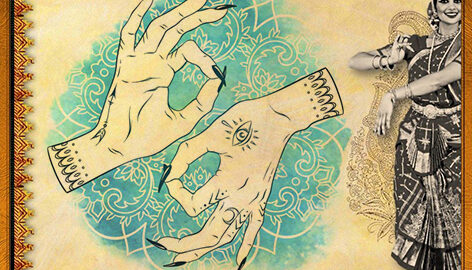 Dance is an expression of our inner emotions. It’s the means to connect with nature (Prakriti) for every dancer. Dance is an emotion, Dance is an Expression, Dance is freedom and Dance is a way of life. All over the globe, there are different dance styles and techniques, but the passion and emotion behind every dance form are the same. India is home to many different dance styles. One can also say the bits of Indian traditional dances on the rhythm of her classical dances and the most prominent among them is ‘Bharatnatyam’. This classical dance of the far south has been given its rightful place with Bharatnatyam Hasta Mudras Depicted on Coins.

The tradition of classical dance in India can be traced back to the Indus Valley civilization. The continuations of this magnificent manifestation differ in various states. These innumerable dance forms gave birth to the major Indian classical dance forms like Bharatnatyam. The evidence of these dance forms can be seen in iconography and literature, but most of these styles are drawn from the ‘Natyashastra’ (2nd century BC) written By “Bharata Muni”. Bharatnatyam got its name derived from Bharata Muni. But all these dances are the division of two pure dance forms called ‘Tandeva’ and ‘Lasya’.

Bharatnatyam is the traditional classical dance form that originated from the state of Tamil Nadu. It has been the richest and oldest dance form of India. The uniqueness and antiquity of Bharatnatyam are approximately 3000 years old. Eons ago, Bharanatyam once was called ‘Sadri-Uttam (Court dance) and also ‘Dasiattam’ (performed by the servants of Gods). To learn and perform this dance form, one requires dedication, practice, and concentration. This dance form is a mastery of grace, balance, endurance, and a sense of rhythm. For a dancer Bharatnatyam is an icon of beauty and perfection; as a philosophy, it is the search of the human soul; as a religion, it is the quest of Nivarana and as poetry a rhythmic lyricism.

One of the most striking aspects of an Indian Classical Dance is the use of hand gestures, also known as Hasta Mudra. In order to convey the meaning of what a dancer is performing, hand gestures are a significant addition to facial expressions. However, there are also Nritta Mudras, that is employed for the sake of beauty and decorative purposes while performing Nritta. So vast is the hand gestures that it covers almost all the aspects of human life and the entire universe. There is a hand gesture for every single thing in this universe. Some are performed with a single hand while some may require the use of both hands. Hence ‘Mudras’ bring unique poetic element while performing Abhinaya (expressions) and thus the language of the mudras enables the dancer to express practically anything and everything.

The first of Bharatnatyam Hasta Mudras Depicted on Coins is Mushti Mudra. In simple words, it is a closed fist position of the palm. “When the four fingers are pressed closely against the palm while the thumb is held tightly between the palm and the other four fingers, you are performing the mushti Mudra” The thumb can also be placed on the four fingers. The mushti hasta is the ninth hasta of the 28 Single Hand Mudras (asamyukta hasta) as described in the Abhinaya Darpana. According to ancient sources, this Mudra originated from Vishnu, who used this hand gesture while he was fighting with Madhu. Some more applications: grasping, waist, fruit, agreement, saying “Very well”, sacrificial offering, greeting common people, carrying away, string hold, holding a book, running, lightness, wrestling, holding a shield, holding the hair, fisticuffs, grasping a spear.

The second of Bharatnatyam Hasta Mudras Depicted on Coins is Shikhara Mudra. Here, all the fingers are bent and pressed against the Palm except the thumb. The thumb is raised and held erect. (like the thumbs-up Sign). The shikhara hasta is the tenth mudra of the 28 Single Hand Mudras. Make the hand into a fist. Then lift the thumb up, holding it at an angle of 90 degrees to the fist. You have just made the shikhara hasta. This asamyukta hasta originated from Chandrasekhara (Shiva) when he held Mt. Meru as his bow. It is used to denote the following: armor, a bow, a pillar, making an offering to manes, upper lips, a tooth, sounding of bells, drinking or pouring a drink, etc.

The third of Bharatnatyam Hasta Mudras Depicted on Coins is Kartati Mukh Mudra. Kartarimukha Mudra is done when the little finger and the ring finger are bent and pressed against the thumb. While the index finger and the Middle finger are stretched to show a scissor. Kartari Mukha is the fourth Mudra of the 28 Single Hand Mudras. The name literally means ‘scissors’ and the hand is held in that shape. Use the thumb to hold down the ring finger and little finger. Keep the index and middle finger straight, stretching and separating them so that the middle finger comes forward towards the thumb and this is kartarimukha hasta. The Kartarimukha mudra also means the Arrow-Shaft face or the Scissors Face. In dance, this mudra is used to symbolize many things like separation, distress, death, or disagreement.