Our world is an interesting place. It’s ever-changing and dynamic. There’s no better and easier way to get to know the complex history and geography of the world than through the banknotes issued by various nations. Today let’s take a trip down the past and get to know about the historic region of Indochina and have a look at the beautiful banknotes of the French Indochina.

Indochina was a geographical term of the early 19th century referring to the continental portion of the region today known as Southeast Asia. The name refers to the lands historically within the cultural influence of India and China and physically bound by the Indian Subcontinent in the west and China in the north. It corresponds to the present-day areas of Cambodia, Thailand, Laos, Myanmar, Vietnam, and (variably) Peninsular Malaysia and Singapore. The term was later adopted as the name of the colony of French Indochina (today’s Cambodia, Vietnam, and Laos).

The Banque de l’Indochine or the Bank of Indochina was established in Paris on 21 January 1875. The main purpose of the bank was to operate in French territories in Indochina, the rest of Asia, and the Pacific.

It issued banknotes, not only in French territories but also in China and elsewhere. Up to World War II, the bank experienced three phases of development. From 1875 to 1888, it functioned as a colonial bank to help the French government manage its colonial properties in South-east Asia. Then from 1889 to 1900, the bank shifted its operations from French Indochina to China. Thereafter, from 1900 to 1941, the bank represented the interests of the French government in handling the Boxer indemnity and transacted international trade between France and China.

It merged with Banque de Suez in 1974 to form Banque Indosuez, which was then purchased by the Credit Agricole group, which operated it as Credit Agricole Indosuez (CAI), until a 2004 merger with Crédit Lyonnais, which created Calyon.

Now let’s have a look at some of the banknotes of the French Indochina: 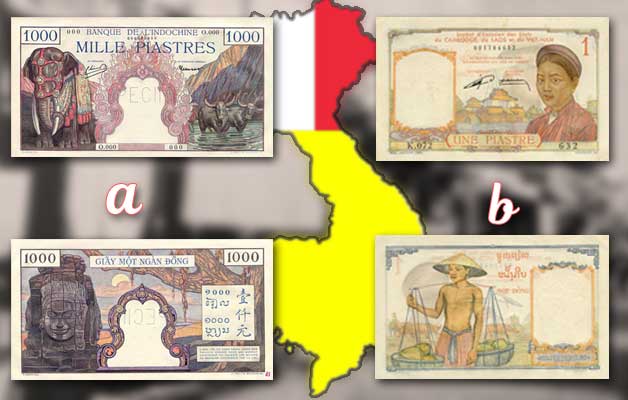 a) The note depicted in image A is a 1000 Piastres banknote of 1951. The obverse portrays elephant and water buffaloes. The reverse has four faces of Bodhisattva Avalokitesvara from the world famous Bayon temple at Angkor in Cambodia.

b) The note depicted as B is a French Indo-China 1 Piastre banknote of 1936. The obverse has a young woman portrayed against the temple by a body of water. The reverse features a young peasant carrying fruits with water buffaloes in the background.

a) The note depicted in the image (a) is a French Indo-China 500 Piastres banknote from 1944-45. The obverse depicts a temple detail to left with an irrigation scene to right, while the reverse features a mythical dragon.

b)The note depicted in the picture above (b) is a French Indo-China 1 Piastre banknote of 1945. The obverse Peasants in boats wearing Non-La hats carry baskets on Mekong River. The Reverse has the famous Angkor Wat temple in Cambodia. 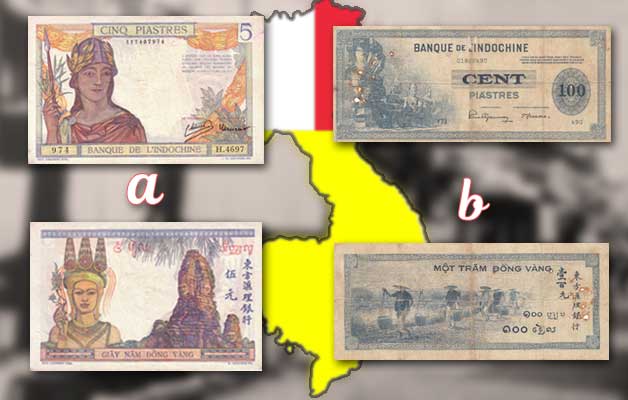 a) The note depicted in the image (a) is a French Indo-China 5 Piastre banknote of 1946. The obverse has a portrait of a woman with helmet and lance to left, large denomination numeral 5 over wreath at upper right on white background. The reverse has Omen with headdress at left, ancient statues at right, inscriptions with Lao to far right.

b) The note depicted in the image (b) is a French Indo-China 100 Piastres banknote of 1945. The obverse features the statues at the famous temple Angkor Wat. The reverse shows the peasants carrying baskets by a river.

Indeed instead of just spending the money, just for once let’s appreciate the beauty of their designs. There are so many more such banknotes of the world and we are very excited to explore the world through them. Stay with us and let’s enjoy this together.