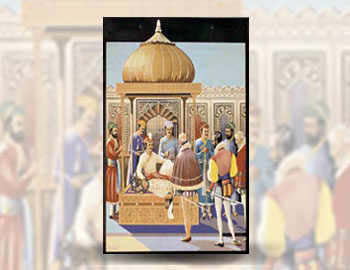 Coins make history speak! They are not just a means of exchange but also a store of value. Their metallic quality helps judge the economic state of a reign while their spread indicates how far a ruler’s sovereignty extended. This huge development of economy and expansion of kingdom can be traced in the coins issued during the reign of Akbar Badshah. Akbar’s coinage provides a powerful reflection of his own personality and they are most beautiful, exquisite and varied among the one that are minted by other Mughal Emperors.

During the fifty years of his reign, Emperor Akbar issued gold, silver and copper coins in large number of denominations from more than 108 of mints. The main aim of this article is to get the novice researchers acquainted with the enchanting world of Akbar’s coinage. The blog throws light on Akbar’s monetary system and the different kinds of denominations that prevailed during his reign.

The gold coins that are available can be divided into two broad categories.

The Kalima type: The obverse of these coins contained the Kalima -The Muslim affirmation of faith (La Ilaha Illallahu Muhammadur Rasulullah) in the centre with names of four Caliphs (Abu Bakr, Umar, Usman, and Ali) with or without their respective epithets, in the margins. The reverse normally had the name and title of the emperor along with some pious wish, mint name, and date.

An interesting system prevailed in Akbar’s period, which is described in the Ain-e-Akbari in detail. According to that, people were allowed to bring their own gold to the royal mints, which was refined to the required standards and then stamped with royal dies on payment of seignior age (profit made by government by issuing currency) of 5 1/2 percent. 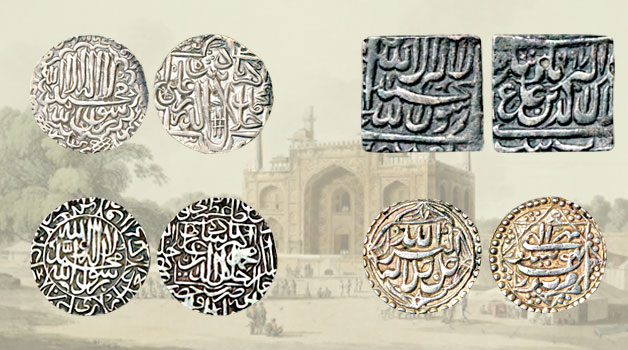 Silver Rupees of Akbar were issued from Agra, Hazrat Delhi, Lahore, and Hissar Firoza mints from the very first year of his rule. His silver coins followed the same pattern as the gold coins.

In the second half of Akbar’s reign the pattern of the silver coinage changed drastically. The Kalima was dropped from the obverse and the expression “Allahu Akbar Jalla Jalalhu” (God is great, bright is his glory) was substituted. Akbar’s name and titles were deleted from the reverse, and the mint name with Ilahi year and Persian month placed in center flan.

The silver half Rupee is about 88 grains. One Quarter of a Rupee called as Charn, One fifth as Pandau , One eighth of a rupee as Asta, one tenth are called as Dassa, One sixteenth are known as Kala, and one twentieth rupee called as Suki.

During last decade of Akbar’s reign, his son Jahangir grew increasingly restive in the desire to assume supreme power. During this period rebellion coins were issued by Jahangir from Allahabad. These silver coins followed the imperial style, but with a Persian poetic couplet giving mint name and date.

Akbar’s first copper coins were in the same style as those of Humayun. The obverse side of his coins depicted name of the mint along with “Falus” (literally meaning “Money”). The reverse side of these coins contains date in Hijri Era either in words or in numerals as well.

Copper Dam was also associated with Akbar’s system of weights. The Akbar Dam weighed 20.9 grams and was exchanged at 40 Dam per Rupee. The Akbari unit of weight “The Ser” and was fixed at 30 dams to the one Ser.

Akbar’s coinage remained as some of the most excellent examples of aesthetics and artistic excellence in Indian coinage. Coin collectors all over the world are fond of collecting some of these gems. This blog covers few aspects of Akbar’s coinage. Keep visiting to read more.