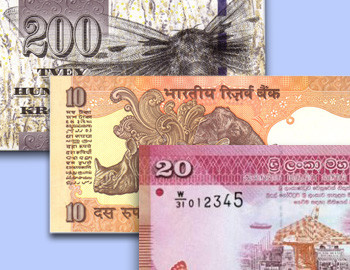 Sometimes we tend to forget that humans are not just the only inhabitants of the earth. And that has led to the destruction of forests which in turn has affected wildlife. This rather heartless act of human beings has also resulted in the extinction of some beautiful species. I personally feel that in this world of money and economic advancement, one should never forget how beautiful nature is and should try to live in sync with it. Let’s look at some countries who follow the same belief and have gone ahead to print some fabulous illustrations of wildlife on banknotes.

Fiji’s recent banknote-issues have very interestingly featured some rare species that are found in the islands. For example the $5 note which bears Kulawai also known as the red throated lorikeet. It is considered to be the smallest member of the parrot family and was last sighted in 1993. The $10 note features a Beli, one of very few true fresh water fish found in fast running streams up in the highlands. Kacau ni Gau, (Fiji Petrel), one of the world’s most iconic rare birds, is featured on the $20 note. It spends it time in the seas and very rarely seen on land. This species is almost extinct now. Many other such beautiful animals have been depicted on notes from Fiji. So if you are collecting banknotes with animals, then you should definitely eye this one!

The reverse side of kiwi banknotes have some beautiful illustrations of the fauna that defines the nation. The 10 shilling note bears a kiwi the national bird of the country. The blue coloured 5 pound note features a fantail or piwakawaka, commonly found in the South Island of New Zealand, also in the North Island. The 50 pound red coloured note bears an illustration of a tui. The tui is a bird which is one of the largest members of the diverse honeyeater family. New Zealand is therefore considered as one of the leading nations to portray wildlife on banknotes.

Tourists from around the world flock into Sri Lanka to witness its vibrant wildlife. More the reason why their banknotes depict some really amazing fauna that defines this country! Sri Lanka Serendib Scops Owl appears on the right side of the note and the butterfly, the Baronet appears on the lower left corner of the 20 Rupees note. Sri Lanka Dull Blue Flycatcher and the butterfly, The Blue Oakleaf appears on the 50 Rs. note. Similar combinations prevail on other notes as well. If you are an animal lover then collecting Sri Lankan banknotes with wildlife is a real good idea.

India is another country which has a very diverse and interesting wildlife. Notes of different denominations depict different animals that are predominantly found in the country. The famous Bengal tiger, our national animal, features on our INR 2 banknotes. The herbivore families of antelopes, gazelles, bucks and deer adorn the INR 5 banknotes of India. The notes issued under the authority of S. Jagannathan have two peacocks, our national bird, in the centre flocked by 3 deer and 2 horses. 100 Rupees notes issued under the authority of B. Rama Rau have elephants depicted on them. If you are looking for wildlife on banknotes, then first look for change in your own pockets.

Here are links to some more Indian notes with Tigers.. Roooooaaaarr!

Even Madagascar has some really amazing banknotes which portrays the native culture, human life and fauna of that land. The 5000 francs note issued in 1995 features lemurs which are endemic to the land of Madagascar. The word “lemur” derives from the word lemures (ghosts or spirits) from Roman mythology and was first used to describe a slender loris due to its nocturnal habits and slow pace, but was later applied to the primates on Madagascar. This could be one of the most unique animals you can ever see on banknotes.

Faroe Islands is a country of small islands between the Norwegian Sea and the North Atlantic Ocean. The currency here is called krona and banknotes issued by this nation depicts some eye-grabbing and interesting illustrations of fauna found in this part of the world.  The obverse of 50 kroner portrays a Ram’s horn; that of 100 kroner depicts a cod’s tail, 200 kroner displays a beautiful image of a moth; 500 kroner shows a shore crab and the 100 kroner a lovely sketch of a purple sandpiper. Ever thought, a small country like that can depict such beautiful illustrations of animals on banknotes?

Think of a jungle safari and you might think of South Africa. Tourism in this part of the world is all because of its spectacular wildlife. It is very natural for the government of South Africa to issue notes featuring some of the most commonly found animals of the land. The R10 note displays the head of Rhinoceros, the R20 note shows a beautiful imagery of an Elephant, a majestic Lion is shown on the R50 note, the R100 note depicts a Buffalo and a ferocious leopard is portrayed on the R200 note. So if you are looking for wildlife on banknotes, then you should try to have this piece of beauty.

In the year 2011 Antarctica issued a beautiful banknote featuring Penguins sliding down hill along with the Flag of Antarctica on the obverse. The reverse depicts Emperor Penguins and the South Pole Centenary ‘1911-2011’. The note is designed by Antarctica Overseas Exchange Office. Wings of penguins are evolved into flippers so that they can also live under water. These aquatic and flightless birds are mostly found in the Southern Hemisphere, especially in Antarctica. Penguins generally feed on krill, fish, squid etc while swimming underwater. They spend about half of their lives on land and half in the oceans.

Here’s another country which has issued many banknotes featuring animals. The one ruble bill depicted a running hare which gave the note its popular nickname zaichik. Hares belong to the family of rabbits and are similar to them in size, form, and diet. They are extremely swift and can run at a speed of up to 56 km/h. The term ‘Mad as March hare’ is derived from the fact that hares turn crazy in the month of March and can be seen boxing, or chasing each other to attract their female counterparts.

There are several other countries who issue banknotes with animals on them. Start collecting, but beware, these wonderful illustrations of amazing animals around the world could make you addicted.