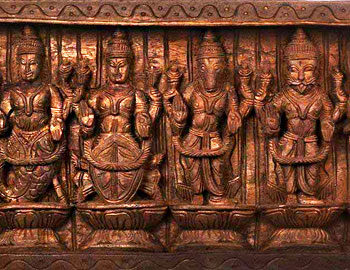 “It is I who descends to earth from time to time to reinstitute the order when the anarchy prevails” – the concept of Divine descend is a phenomenon that speaks about the manifestation of divinity into a form. In Bhagawad Gitā [1] Shri Kiṣṇa declares that God himself incarnates to eradicate the evil, to put an end to the impious practices and to eliminate the chaos that prevailed in an otherwise peaceful society. These incarnations or the Avatāras is a core concept of Hinduism and being the preserver and sustainer Aspect of God within the Hindu Trinity; they are often associated with Viṣṇu. When pertaining to Avatāras in the Hindu tradition, the most widely associated deity is clearly Viṣṇu. According to the Bhāgavata Purāṇa, Viṣṇu has innumerable Avatāras in unlimited universes, though there are ten major incarnations, known collectively as Daśāvatāra. The concept of Daśāvatāra – ten incarnations of Lord Viṣṇu – is not treated as mere mythological or religious stories in India, but is incorporated in the roots of Indian society in the form of philosophy as well as performing arts and creative arts. The most unusual combination of Daśāvatāra mythology, Indian art forms and the practicality of Indian society is “the Depiction of Daśāvatāra on Indian Coins”.