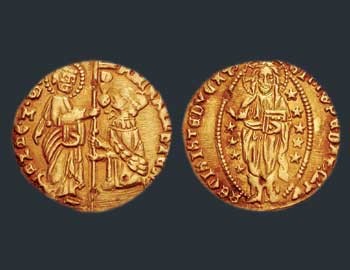 The Venetian Ducats were gold and silver coins that gained international acceptance for the trade between Europe and Asia from the 14th century BCE to 18th century BCE. The word ducat comes from the Medieval Latin ducatus meaning “relating to a duke (or dukedom)”, and initially meant “duke’s coin” or a “duchy’s coin”. One of the most popular of ducats was the Gold Ducat of Venice.