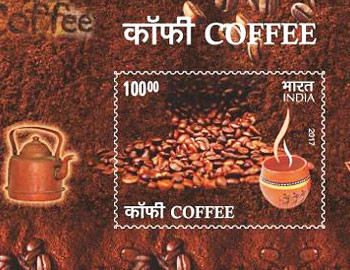 Close your eyes. What does your brain process when your eyes can’t see anything? Sound, touch, smell, taste are the remaining four powerful senses that humans possess. Each one of them adds a new dimension to what you perceive. Electric signals are sent by special sensory glands using which the brain decodes various messages for you. Stamps generally are visually appealing and activate sensors related to human sight. But there are many scented stamps around the world which also activate sensors related to smell. Let’s take a look at the four scented stamps of India that have been released by India Post Till date.

Sandalwood is one of the priciest types of woods around which is known for its enchanting fragrance. Unlike other aromatic woods, it retains its fragrance for many decades. These trees grow slowly, due to which they have become victims of over-harvesting in the last hundred years. Indian is one of the biggest homeland for sandalwood apart from other countries like Nepal, Bangladesh, Sri Lanka etc. When used in smaller quantities in a perfume, it acts as a fixative as well. The seed kernels, nuts, and fruit of local sandalwoods is consumed by Australian aborigines. In India, Sandalwood oil is used in the cosmetic industry. Famous dacoit called Veerappan from Karnataka, India was known for illegal trade of Sandalwood. For oil to be extracted, sandalwood needs to go through a distillation process. It also has a lot of significance in religions like Hinduism, Buddhism, Sufism, Jainism, Zoroastrianism etc. The Sanskrit word for sandalwood is Chandana which has been used since ancient times for decorating deities, for applying on foreheads, neck and chests, making it divine in some ways. India Post released scented stamps with the fragrance of Sandalwood in the year 2006.

A flower that will mend fences between two lovers; that will bring a smile on your beloved’s face – that’s a rose for you. There are over a hundred variety of roses on the earth each of which has its own enigma. Most of the species are found in Asia and a few of them are seen in Europe and North America. Known for its striking petals and amazing fragrance, these plants also have a lot of prickles on their stems. They are used as ornamental flowers whereas cut flowers are also kept in homes to add a dash of warmth. It is also used to make various food products like jelly, jam, ice cream, rose syrup etc. Roses also have a medicinal value and are rich in vitamin C, which is why they have been used for several herbal remedies. Shalimar Bagh, the largest Mughal Garden of India built by Emperor Jahangir for his wife Noor Jahan in the year 1916, showcases a wide range of beautiful roses. India Post released a set of four scented stamps in the year 2007.

Garlands made of Jasmine flowers are typically worn by South Indian women in their hair as a part of ornamentation. Did you know that there are over 200 species of Jasmine on earth which are majorly found in Eurasia, Australasia and Oceania? You will never imagine how small while coloured flowers like Jasmine can have such a strong yet pleasing scent. In China, Jasmine is used for preparing tea as well, called as Jasmine Tea.  It is also used majorly in festivals, marriages, and religious rituals in India. It is also sometimes offered to deities of Hindu Gods. India Post released scented stamps with the fragrance of Jasmine in the year 2008.

They say a cup of good coffee is the best way to greet yourself a Very Good Morning. Coffee is one of the most consumed brewed-drink all over the world. It contains little portions of caffeine that gives a stimulating effect on humans. It is prepared in various ways like an expresso, cafe latte, cappuccino etc. one of the most recent trends has been iced-coffee which has turned it into a lovable cold drink in the hot summers. Click here to read a complete article about 100 rupee coffee scented stamps that were recently released by India Post.

That’s all for now! Upgrade your collection with these lovely scented stamps of India and close your eyes once again to traverse into a new world of enticing fragrances of India.