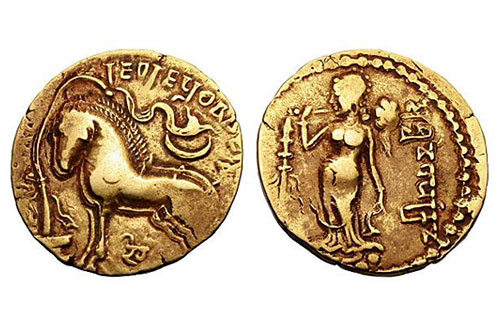 Gupta Numismatic Art - Ashvamedha Type Samudragupta is known to have performed the Ashvamedha sacrifice at least once in his lifetime. Kumaragupta I may have also performed the sacrifice to celebrate his victory over the rebellion led by the Pushyamitras of Central India and the invasion of the White Huns as is evident from the coins issued by him. Samudragupta also issued coins to commemorate this event.

To celebrate his victories in Northern and Southern India, Samudragupta performed the Ashvamedha sacrifice, probably late in his reign. He took pride in reviving the ritual and issued Ashvamedha coins in gold to commemorate the event. Numerous coins of this type have been found; 20 of them in the Bayana hoard itself. The diameter of these coins ranged from 19 to 23 mm while the weight varied from 112.5 to 119 grains. The average weight was 115 grains. The coins are found mostly in Patna and Sahranpur.

The Obverse of the coin depicts the sacrificial horse standing before a yupa or a sacrificial post on a platform while the Reverse of the coins shows the crowned queen standing on a circular pearl-bordered mat with a chouri in her right hand and a towel in her left. A spear-like object can be seen in front of her.

The Ashvamedha coins commissioned by Samudragupta of Gupta dynasty are among the best of specimens in terms of numismatic art. The art displays high merit and great detail. The horse looks graceful and noble while the queen’s stance if slim and elegant. The horse is uncaparisoned in all coins; although, in some coins, a strap may be shown around its neck. Some coins show the horse with beads strung to the mane. The Vedic texts advise pleating the horse’s mane and tail with beads. The coins, however, do not depict a beaded and pleated tail. Each coin is inscribed with the Brahmi letter ?si’ placed under the horse. Experts who have studied these coins suggest that the letter stands for the word, 'siddha?'.

The engravers were influenced by artistic consideration in addition to their regard for the sacred texts which is prominent in the presentation of the yupa. Penons of flying cloth depicted on the coins were not prescribed in the Vedas. This was the artist’s impression. Since the coins were small, the yupa staff could not be depicted as being eight-cornered, as described in the texts. However, it is shown to be bent in the middle and at the top, exactly as the Vedic texts prescribe.

The queen depicted on the reverse is shown to be holding a chouri in her right hand and a piece of cloth or a towel in her left. Rituals of the sacrifice required the queen to fan and wash the horse; hence, the depiction. The staff, in front of the queen was interpreted as a standard or a sacrificial spear. The sacrificial spear was not used for the Ashvamedha; and as the staff had no flag, it could not be regarded as a standard. Altekar concluded that it must be a ceremonial needle which was used, in accordance with the texts, by the queen.

Ashvamedha Coins of Kumaragupta I

No epigraphic mention has been found so far that mentions the performance of the Ashvamedha sacrifice by Kumaragupta I. His coins, however, prove that at least one was performed by the king during his reign. The Ashvamedha coins issued by Kumaragupta I are rare and artistically inferior to those issued by Samudragupta. The horse on the obverse is caparisoned in some coins and yupa is crude. The queen’s figure on the reverse is stumpy, bent and fat. The Brahmi letter ?si’ is not seen under the horse. All coins weigh a standard issue of 127 grains. In Variety A of Kumaragupta’s Ashvamedha coins depict a caparisoned sacrificial horse facing right, while in Variety B, a bare-backed horse is seen facing left.
Latest Stories
View All
Knowledge Base
Enquiry