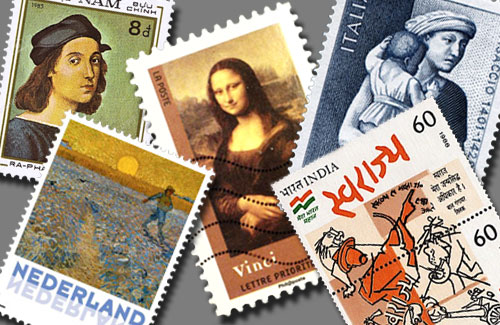 We all have a worldview about everything in life. Paintings will give you a whole new perspective to looking at things, through a painter’s vision. When everyone is running after something that they don’t have and when time zips past you with the blink of an eye; hold back, take a deep breath and take it slow. Let’s explore some of the most celebrated paintings that have been featured on stamps across the globe.

Undoubtedly one of the world’s most appreciated and loved paintings, Mona Lisa is a real sensation among art lovers. The Mona Lisa resembles many Renaissance depictions of the Virgin Mary and is known for its intricate portrayal of expressions and minute detailing. Her folded arms depict a reserved posture. Though the painting was made around 1503, it looks alive to a very unusual extent. Leonardo was one of the first painters to use an aerial perspective with the enigmatic woman seated in an open loggia featuring a vast landscape of icy mountains, winding paths and a distant bridge, behind her. Many stamps have been issued by different countries depicting this lovely painting.

Adam and Eve by Michelangelo

The Sistine Chapel ceiling, painted by Michelangelo between 1508 and 1512, was another notable artwork of the Renaissance Period. The narrative paintings illustrate that God made a perfect World and then made humans. Humanity then sank into sin and was punished by the Great Flood. Through a lineage of Ancestors from Abraham to Joseph, God sent the saviour of humanity, Christ Jesus. The paintings showcase of humanity's need for Salvation as offered by God through Jesus. India has issued a special stamp featuring one of these wonderful paintings.

Self Portrait by Raphael

The Italian Renaissance painter, Raphael painted a Self-Portrait between the years 1504 and 1506 using oil on board. The painting measures forty seven and a half by thirty three centimetres. The painting is housed at the Uffizi Gallery in Florence currently. This painting is considered as the clearest or most recognizable depiction of Raphael himself. Vietnam has issued a stamp portraying this powerful painting.

Mother and Child by Masaccio

Masaccio was the best painter of his generation because of his skill at recreating lifelike figures and movements as well as a convincing sense of three-dimensionality. The first works attributed to Masaccio are the San Giovenale Triptych (1422), now in the Museum of Cascia di Reggello, near Florence, and the Virgin and Child with Saint Anne. An Italian stamp features one of his beautiful painting.

The Sower with the Setting Sun by Van Gogh

This drawing was created in year of 1888 by Van Gogh in Arles, France. He tried hard to produce strong colors, to develop a consistent brushstroke and to create a convincing, powerful figure which is clearly evident in the painting. Though the painting is not as colourful as his other works, the picture is lively, with the small figure of the sower taking silent strides across his field. This amazing painting has been depicted on a stamp from Netherlands.

Damayanti was a princess of Vidarbha Kingdom who was so beautiful that that even the gods admired her. She fell in love with Nala simply by hearing of his virtues and accomplishments from a golden swan. The Gods Indra, Agni, Varuna and Yama tried their luck at the swayamvara, but Damayanti saw through them each time and chose Nala to be her husband. One of India’s greatest painters Raja Ravi Varma depicted this beautiful lady in one of his most acclaimed works. This painting also is featured on an Indian stamp.

M.F. Husain, was known for executing bold, vibrantly coloured narrative paintings in a modified Cubist style. He was one of the most celebrated and internationally recognized Indian artists of the 20th century. Also known as “Picasso of India,” Husain’s works were caustic and funny as well as serious and sombre. He covered topics as diverse as Mohandas K. Gandhi, Mother Teresa, the Ramayana, the Mahabharata, the British raj, and motifs of Indian urban and rural life. A special se-tenant painting has been depicted on an Indian stamp.

Now you know, knowing more about such varied stamps is only going to help you get a broader perspective about people, culture, art and many more aspects of this world.