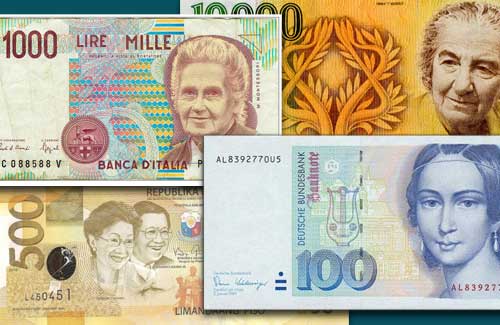 Women have made their mark on not just different facets of life but also on various banknotes of the world. Since the month of March is dedicated to women, Mintageworld presents you interesting information about currency notes featuring famous women from around the world.

Only recently has UK decided to depict women on banknotes and countries like the USA, China and India have only printed men like Founding Fathers, Mao Zedong and Mahatma Gandhi respectively. On the other hand, several countries have honoured important women by portraying suffragists, poets, and even revolutionary martyrs on their bills. Australia even has a businesswoman from the 19th century featured on a dollar.

Let’s take a quick look at currency notes that have been issued by different countries.

Before the introduction of polymer notes in 1990s Australia only featured men on their banknotes. But today, it is one the top countries along with Sweden to represent women on notes just as much as men. Women like Princess Diana, Caroline Chisholm, Opera star Dame Nellie Melba etc have been depicted on them.

Mexican 500 Peso note features painter Frida Kahlo who is known for her self-portraits. Her life was constrained in Mexico City, named after her “La Casa Azul," the Blue House. Her work depicts Mexican culture has been celebrated internationally by feminists for its uncompromising depiction of the female experience and form. Mexican culture and tradition are important in her work, which has been sometimes characterized as na?ve art or folk art.

Argentina has former First Lady, Eva Peron on their 2 peso and 100 peso notes. Born in the rural village of Los Toldos, in the Pampas, as the youngest of five children, she moved to Buenos Aires at the age of 15 to pursue a career as a stage, radio, and film actress. She married Juan Perón who was elected President of Argentina in 1946. In the next 6 years, Eva Perón became powerful within the pro-Peronist trade unions, primarily for speaking on behalf of labor rights.

Polish and naturalized-French physicist and chemist Marie Curie appeared on Polish 20,000 zloty in 80s and 90s and on French 500 francs along with her husband. She conducted pioneering research on radioactivity and was the first woman to win a Nobel Prize. She was also the first woman to become a professor at the University of Paris

Golda Meir, Israeli Prime Minister adorns the 10 shekel notes. After serving as Minister of Labour and Foreign Minister, Meir was elected as the Prime Minister of Israel on March 17, 1969. The world's fourth and Israel's first and only woman to serve this position, she has been described as the "Iron Lady" of Israeli politics. Former Prime Minister David Ben-Gurion used to call Meir "the best man in the government"; she was often portrayed as the "strong-willed, straight-talking, grey-bunned grandmother of the Jewish people".

Corazon Aquino, the president of Philippines appears on the country’s 500 peso banknotes. A Filipino politician who served as the 11th President of the Philippines, Aquino was the most prominent figure of the 1986 People Power Revolution. Her efforts helped the nation fight the 20-year authoritarian rule of President Ferdinand E. Marcos and restored democracy to the Philippines. She was named Time magazine's "Woman of the Year" in 1986.

Germany had Clara Schumann, a famous pianist and composer on their 100 Deutschmark banknotes. She was considered one of the most celebrated pianists of the Romantic era. She had an extremely successful 61-year concert career, changing the format and repertoire of the piano recital and the tastes of the listening public. Her husband was the composer Robert Schumann. Together they encouraged Johannes Brahms. She was the first to perform publicly any work by Brahms.

Educator, Maria Montessori featured on the 1000 Lire banknotes of Italy. She was an Italian physician and educator best known for the philosophy of education that bears her name, and her writing on scientific pedagogy. Her educational method is in use today in some public and private schools throughout the world.

Since even today many countries do not encourage depicting women on notes, there have been many public initiatives and requests to change this nomenclature.

Women are not known to appear on banknotes of most of the countries. However a call for an attempt to recognise and value their contribution has arisen and we have a few countries that are redesigning their banknotes to introduce their historical female leaders on banknotes.

UK in 2013 announced that Winston Churchill would be replaced by Elizabeth Fry - a social reformer and philanthropist - on the £5 note and the legendary author Jane Austen would adorn the £10 note from 2017.

To all the women out there: